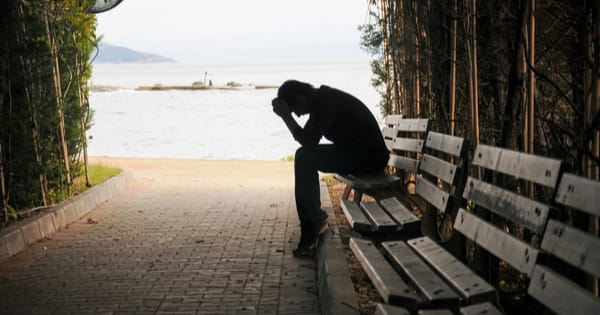 Grieving the death of a relative or friend is an intensely painful and personal process and while there is no “right” way to grieve, there is certainly a “wrong” way or, more accurately, a self-destructive way.

So it seems for Kristoff St. John,  a 27-year veteran of the CBS daytime soap “Young and the Restless.” The actor who was nominated nine times and won two Daytime Emmy awards for his role as Neil Winters on the top-rated soap was found dead in his Los Angeles home Feb. 3. The official cause of death was “deferred” by the LA County coroner’s office pending toxicology results, but a published report cited suspected alcohol poisoning.

News of St. John’s death throttled ‘Y&R” fans and reverberated with numbing shock through the show’s cast and crew. Yet posts on social media by some ‘Y&R” colleagues hinted that St. John was a troubled and even tragic figure in the last years of his life, unable to emerge intact from the apparent suicide of a 24-year-old son in 2014.

Eric Braden, who has played billionaire entrepreneur Victor Newman on the soap since 1980, tweeted that St. John “was deeply, deeply caring about his son and deeply wounded by his son’s death.” Actress Jess Walton, aka Jill Foster Abbott Atkinson for more than 30 years on the show, wrote that her consolation was that St. John was “finally out of pain” and had been reunited with his son.

News reports of St. John’s death fixed mostly on biographical statistics and, predictably, the reactions of colleagues and industry insiders. USA Today distinguished itself, however, in a feature published Feb. 5 (https://www.usatoday.com/story/news/2019/02/05/kristoff-st-john-dies-4-years-after-son-julian-st-johns-suicide/2772047002/) that spoke to “suicide loss survivors,” people who have lost loved ones to suicide. Theirs is what is labeled “complicated grief” that increases the risk of physical, mental health and relationship problems and which can contribute to their own premature deaths.

USA Today cited research findings of psychiatric and suicide prevention associations that warn of the dangers of unresolved grief. Those warnings, although aimed at people who have lost loved ones to suicide, are nonetheless relevant to anyone mourning the loss of a loved one to causes other than suicide.

But among suicide loss survivors, their experience with suicide increases their risk of killing themselves by nearly three times, according to the Action Alliance for Suicide Prevention. St. John’s experience tends to back that finding. According to news reports, St. John was in mental health observation and under suicide watch in 2017 when he threatened to shoot himself.

Parents whose children have committed suicide are at higher risk of depression, anxiety and physical disorders, marital conflicts and divorce. The reason is that suicide loss survivors face “complicated grief,” defined as grieving both the loss of a person close to them and working through the emotional fallout if death is a suicide.

Further, grieving puts a mourner at risk of substance abuse in the form of self-medication with alcohol and drugs. The risk increases markedly if the mourner has a history of alcohol or drug abuse or addiction. Whether that risk applied to St. John is speculative, but the report of possible alcohol poisoning raises a danger flag.

Whether death is by suicide or any other reason, grief inflicts on the mourner the painful realities that a loved one has died and that life probably will never be the same. Grief also comes without a script to be processed according to gender, sexuality, religion or age. Men in particular may be at higher risk of suffering the possible health and emotional consquences of unresolved grief if they buy into tabboos that men don’t cry or reach out for help and support.

Prescripts in published works for processing grief are certainly specific and helpful. Those suggestions may have more credibility when they come from someone who has gone through the process of mourning a loss. A grief survivor has gone into emotional battle and has emerged, maybe scarred, but emerged intact. Some emerge with what is called “posttraumatic growth,” or a gain of resilience and coping skills, and a higher respect for life and stronger compassion people struggling in it.

The best suggestion for mourners who are unable to work through their pain of loss may be to seek professional help, more specifically, from a therapist or counselor with a specality in grief processing and resolution. Clinical help is probably needed when a mourner is absolutely unable to process their loss and sadness, when he has neither the physical nor emotional strength to face a new day, when he self-medicates with alcohol and drugs and when anger at losiing someone lingers and turns into rage that can be unleashed on uninvolved others.

A footnote to the professional and personal testimonies to Kristoff St. John and his life that ended too soon and too young may be a cautionary tale to all people hurting from loss — and maybe especially to men. His death is a testament that men do cry and suffer, that they do carry indelible pain and injury, and that his example may be the lesson that other men in distress might learn.

In the end, men have the choice to either succumb to pain and loss that everyone inevitably will encounter or to survive as a stronger and better man.