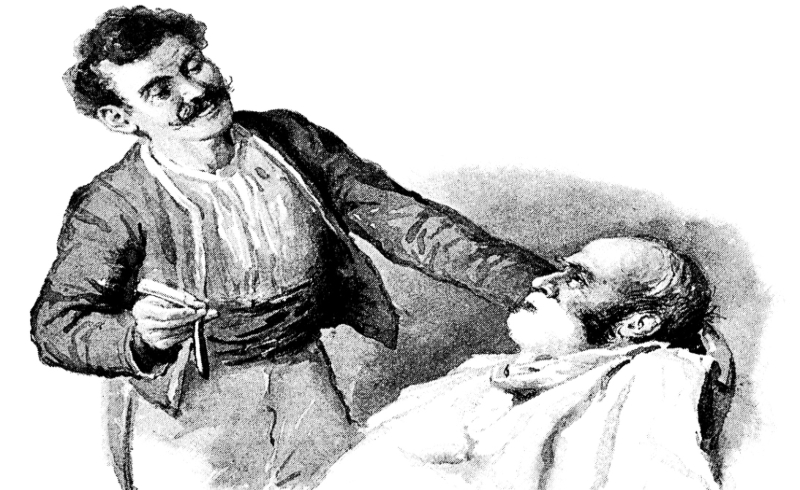 A major theme of my forthcoming book Concerning Beards, about the history of beards, shaving and barbers between 1650-1900, is that of the gradual commercialization of shaving. As I’ve explored in other posts, the period after 1750 saw the increasing availability of a whole new range of creams, pastes and lotions for men to use during and after shaving. It also saw the advertising of razors for use by individual men at home, rather than necessarily having to visit the barber. As the book will show, these products proliferated through the eighteenth century and all through the nineteenth, increasing in number and type, and their advertisements appealing to prevailing ideas about manliness in various ways.

Having a razor look the part was clearly important. Whilst the blade should be shiny and (razor!) sharp, there was clearly a demand for fancy handles. A variety of patents were sought for new types or designs of razor handle, including ‘japanning’ to give an ornamental finish, a ‘vulcanized’ rubber razor handle, ‘a preparation for instrument handles, made from a vegetable compound, rather than horn or bone’, and others promising to make wood resemble ivory. These reinforce the importance of razors as manly accouterments: as well as cutting efficiently, they should also look elegant and upmarket.

Even so, the majority of patent applications related either new devices, or ‘improvements’ to existing razors or sharpeners, to make the act of shaving easier…and often less painful. The discomfort and after-effects of a shave with a bad razor were well known, and often provided fodder for the satirist’s pen. But shaving with an open razor was potentially risky, especially for a man shaving himself. If the handle became slippery with lather, for example, the razor could slip, slice and slash! In 1804, Samuel Bennet’s patent application related to a razor with a steel thumb ring in the handle, enabling a razor to be held firmly and safely in the hand.

The 1830s saw the invention of ‘guard razors’, with various ‘combs’ and other contraptions fitted over blades to lessen the risk of cutting. William Samuel Henson’s 1836 patent razor had a combination tooth guard (which he called the ‘protector’), to prevent the user cutting themselves whilst shaving. By the 1880s the threat was obviously still real. One variation involved a system of rollers to allow the razor to glide over the face: Johnson and Fontaine’s ‘Shaving apparatus and razor guards’ were specially contrived “to allow unskilled persons to shave without cutting themselves”.

Even handling open razors could be dangerous.  Some, such as H. Hilliard in 1856, proposed a new type of razor with a frame and detachable blade, but also with a spring mechanism to keep them closed when not in use. With this, he sought to protect men from the painful and messy experience of accidentally grasping a razor by its blade, rather than the handle.

If razors were to cut efficiently, they naturally had to be sharp. The second-largest group of applications related, unsurprisingly, dealt with innovations in razor sharpeners – strops and hones. Between 1827 and 1888 there were at least 38 different patent applications for various machines, leather straps, some with springs, others using elastic, and using promising-sounding product names such as the ‘Revolving self-cleaning razor strop & shaving companion’. Another suggested paper ‘impregnated’ with glass dust to facilitate sharpening, possibly leading to sharp razors but bleeding fingers.

Finding a convenient receptacle for shaving soap was a common theme and, judging from the efforts and applications of some budding inventors, the job of creating and applying lather for shaving was apparently regarded as something of a nuisance. To relieve men from the seemingly onerous task of lathering soap in a bowl, both Samuel Shipley’s 1853 ‘cases or receptacles containing shaving soap’ and Charles Manby’s ‘Patent Travellers’ Shaving Brush’ offered an ingenious solution. Both proposed ‘hiding’ shaving soap or paste in the handle of the brush. A quick couple of pumps on a piston squirted it straight into the bristles, meaning that it could be applied straight to the face. No bowl required!

Another constant theme in patent applications was that of the need for hot water for shaving. The eighteenth and nineteenth centuries saw debates about whether hot or cold water was preferable; some argued that hot water allowed the blade the move quicker and more easily through tough beard hairs, as well as making the process more comfortable. Others could find no justification for this, arguing that cold water was invigorating and no more harmful to the skin. In 1867, William Atkins was amongst several who proposed contrivances for heating water. Atkins’ ‘shaving appliance’ comprised a large wooden frame, housing a spirit lamp, a large bowl for water, which could be raised and lowered, and a soap and lather box in the base.

But some, however, went way beyond function, and one invention, above all, stands out as my favorite. In 1860, Benjamin Matthewman, a York cutler and surgeon’s instrument maker, applied for a patent for his new method of inserting a photograph into the handle of a razor, thereby enabling a man to gaze lovingly at the sepia-toned features of his inamorata, as he swiped a lethally sharp blade across his throat. Was this to comfort, or to add an extra frisson of danger?!