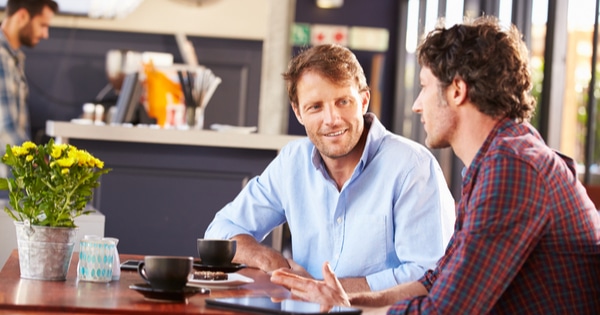 There are two kinds of people in your life; The ones that will always be there and that will love you no matter what and those who won’t. Which are you trying to impress? ~DSJ

I thought of the above while mowing the lawn yesterday and listening to NPR Latino. In an interview with Antonia Cereijido, Author Esmeralda Santiago mentioned how, at some point in her life, she became free from caring what other people thought of her. She also relayed how she tried to convince her twenty-year-old niece to do the same. “You’re not going to know these people in a few years,” she said. This got me thinking about the ones that you do know, the ones that stay in your life. They are the ones that love you no matter what, so you don’t have to care what they think either.

Even though she has been gone for twenty years now, my life still revolves around my grandmother. If you play along with the Enneagram Personality types, you’ll know what I mean when I say that my grandmother was a hardcore Two. Twos are revered because they are such givers, but one of their biggest downfalls can be why they give — to impress others.

The desire to be well-liked and accepted runs strong in Twos. This explains the plastic on my grandmother’s couch. The plastic kept her couch looking new. So, when she expected company, all she had to do was take it off, and it looked like her house was filled with beautiful new furniture all the time — very impressive.

Of course, this all took place before everyone had at least one cell phone. So, sometimes company came by unannounced — before my grandmother could remove the plastic.

The people that love you.

Think of the people who have been in your life for a length of time that you can describe in decades. Chances are, one of you will be attending the other’s funeral. This is called a lifetime friend.

Then there are the rest.

You know, your once BFFs that are long gone. The people whose wedding you were in and now don’t speak to. The people you used to party with, hang out with, go to war with, even slept with. They are all gone. Even when you reconnect with them on Facebook, you don’t say a word to each other. Did you take the plastic of your couch for them? Does it seem like a waste of time now?

These people don’t give two sh*ts about how you paid for their drinks one night, what kind of car you drove, how clean your house was when they visited, how cute your outfit was, how hot your date was for their wedding, or that you only drank the best wine. They don’t care because you are the furthest thing from their mind.

They are too worried about their own sh*t. They have their own lives and their own issues to deal with. Or they could be happy as pie, happily married and raising their beautiful children. Either way, you do not matter to them one bit. And that’s ok because chances are you have also long forgotten about them too.

Who’s coming to your funeral?

My grandmother used to be so concerned about what everyone thought that she lied to them — at least by omission. Divorces and children out of wedlock didn’t get mentioned. Once, while in the hospital, she introduced the man my mother was seeing to her nurse as my mother’s husband. This was a blatant lie.

At her funeral, all her secrets came out, and no one cared one bit. The people that were in attendance loved her and respected her no matter what. And with good cause, she made a lasting impression on everyone, but it wasn’t because of the things did but rather the person she was.

I, myself, am not the most likable of people. This turned out to be a blessing because I started to learn not to care what people thought at an early stage in my life. I could see that there were people that didn’t like me no matter what I did — no matter how hard I tried to impress them.

Then, there were the people that loved me warts and all. The people who stood by me no matter what. No matter how much money I had, or how impressive my career was, how good of shape I was in, or who I slept with.

One would think that these — the ones that love me no matter what — are the people I should impress; the ones that I should spend my time and effort on, but the irony is they are the ones I didn’t have to impress. They loved me for who I was, even when I pretended to be someone or something else.

So do you leave the plastic on or take it off?

The people who love you for what you do or the things you have don’t genuinely love you at all and will be long gone when you no longer have or do that thing anymore. Why waste your time, effort, and money?

I have come to realize that there is never any reason to have to impress anyone — not one. So, take the plastic off and enjoy your couch. Stop worrying about what other people think of you. Your funeral is approaching, and those people that you are so concerned about impressing aren’t even going to come.

David is a retired U.S. Air Force Master Sergeant who didn't realize until reaching his forties that he was a writer. As a child, he struggled with learning disabilities which yielded him grades that barely earned him his high school diploma. With marks like that, the thought of being an author never occurred to him. Also, college was out of the question. He joined the military and retired 23 years later. The same week David took off the uniform for the last time, never to put it back on, he hit the road traveling the U.S. in his van.

David penned several fitness and nutrition article and books, but after listening to On Writing by Stephen King, he decided to give writing fiction a try. He started out with a novel about an Air Force Sergeant who's PTSD caused him to do terrible things in his sleep. This project was for practice as well as fun, and he published a chapter every week on his website www.DavidSotoWrites.com. After several months, this project came to an abrupt halt.

One of Stephen Kings' pieces of advice was to become a voracious reader of fiction. David became obsessed with reading novels and became reacquainted with his favorite "genre," magical realism. One evening while reading, he could not get out of his head the vision of a beautiful woman who sold magical chocolates to people who needed to rekindle the fire in their love life. That was the birth of Los Chocolates de Esperanza Diamante and the series of books that followed.

Currently, David's life on the road is over, and he has settled back in St. Louis with his wife and son.

Facebook17TweetPin1EmailShares18
wpDiscuz
0
0
Would love your thoughts, please comment.x
()
x
| Reply
Share this ArticleLike this article? Email it to a friend!
Email sent!