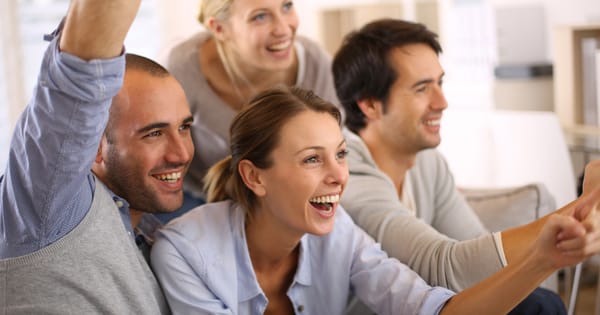 This post is sponsored by Mirum, but all opinions are my own.

When I was in college, I lived in a residence hall with an entrance-way that immediately opened into a staircase leading to the basement below. There, the television room hosted many a raucous football-viewing party and gathering. As I descended the stairs one evening to join in the football fun, one of my fellow Resident Assistants called out “Hey, Em” as I was halfway down the stairs and not in view of anyone.

As I came into view of the football fans I asked, “how the —- what —- but, how did you know it was me? You didn’t even turn around!” She told me that I habitually clear my throat and because I had cleared my throat on the way down, she recognized it. It was the first time I had realized that I did, in fact, clear my throat often. I plopped down to watch the game, but all I could think about was that I was known as the person who cleared their throat all the time.

This was a puzzle. I didn’t suffer from allergies as far as I knew, and it otherwise didn’t bother me. (Plus, I was in college and who really manages their health well in college, am I right?) However, I was super aware of my throat clearing that night and noticed that it increased after the hot wings I ate as we watched the game. It obviously wasn’t the football that was causing the throat-clearing. The wings? I couldn’t figure it out.

Fast forward several years later when I went in for a wellness check. I decided to ask about my habitual throat clearing. At this point, it was impacting my vocal chords negatively and I was clearing and clearing and clearing all the time. I once was a singer who could carry a tune quite well.  At this time, I was finding my voice to be weak and crackly. I told the doctor I had no idea where this throat tickle was coming from because I never suffered what I knew to be allergies.

She informed me that I was looking at it all wrong … while allergies can cause a post-nasal drip that irritates the throat, that was not my ailment. She told me that my throat irritation was from acid reflux. What? Heartburn? I was befuddled because I never experienced what I knew to be typical symptoms of acid reflux. You know, the whole heart burning thing. On rare occasion, after a spicy dinner, I might experience some esophageal burning sensation, but it was nothing an acid reducer melt couldn’t fix. I thought back to that football game, the spicy wings…and it started to make sense.

A subsequent endoscopy revealed that I had what is known as GERD, or Gastroesophageal reflux disease. I was prescribed Prilosec and took it for quite some time until some lifestyle changes and weight loss seemed to alleviate my GERD symptoms. It’s only within the last year that the all-too-familiar throat-clearing symptoms have returned. But this time, I knew where it was coming from. I took Prilosec for a while, but it became too expensive for me and I tried regular Omeprazole, which worked as well. 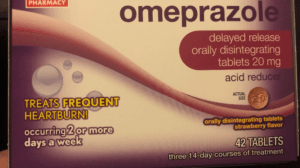 I was excited when I learned of Omeprazole Orally Disintegrating Tablets, not just because it was more affordable, but also because I wouldn’t have to swallow a pill! I believe one of the side effects of having a raw throat because of GERD is that when taking pills, it always felt like they were stuck in my throat for half an hour after taking them. I was hoping this could be no more with Omeprazole Orally Disintegrating Tablets (Omeprazole ODT). I was right! I wasn’t even overly concerned about the flavor of the tablet since I knew I didn’t have to swallow it. I was pleasantly surprised by the strawberry flavor, and it dissolves right on your tongue with no water needed. 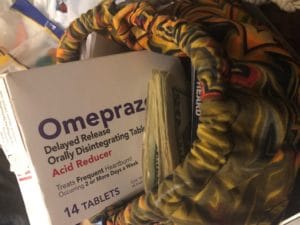 All this said, I didn’t think any of this ultimately mattered if it didn’t give me the results I needed and was accustomed to from regular over-the-counter Omeprazole. I hadn’t taken any medication for my symptoms for at least two months when I tried Omeprazole ODT and I knew the box said it would take up to four days to take full effect. I was fully prepared to give it a few more days than that to be fair. I started to experience a reduction of symptoms within three days! By the end of the first week, I was no longer clearing my throat. Honestly, it works better for me and my acid reflux symptoms than any other OTC method I’ve tried. Not to mention, I can just pop it in my mouth in the morning and be on my way. I carry it in my purse so I never forget to take it. For the best consumption experience, you shouldn’t chew Omeprazole ODT or dissolve it in liquid—just let it dissolve on your tongue.

As with any medication, use as directed by the instructions on the box. Just take one dose every 24 hours for 14 days to complete the regimen. Omeprazole ODT is not intended for immediate relief. Don’t take Omeprazole ODT for more than 14 days unless directed by your doctor. Also, Don’t chew Omeprazole ODT or dissolve it in liquid. 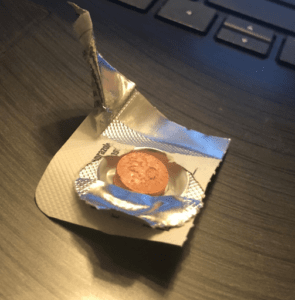 I would recommend Omeprazole Orally Disintegrating Tablets for anyone who is looking for an effective alternative to pills that tastes yummy, too!

Photos provided by the author and Shutterstock

Emily is a mother of two boys, Executive Editor for The Good Men Project, and a yoga instructor. After working in higher education administration for over a decade, she left the field to dedicate her life to the eradication of sexism and racism in our nation.