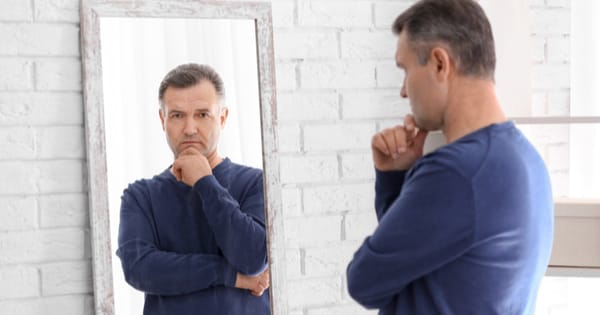 In today’s culture of social media and “fake news,” “fake bodies” (a.k.a. “computer-enhanced imaging”) have become a powerfully influential norm. Americans may have long had complicated relationships with their bodies, but the regular bombardment of rock-hard biceps, perfect legs, big breasts, and chiseled abs is worse today than ever. Many people consequently struggle with poor self-esteem or worse— body dysmorphia and eating disorders that require treatment.

As a clinician for a behavioral healthcare provider, I see many of these struggles up close. In a recent survey, we asked 1,000 men and women to weigh in on a variety of topics, from “body positivity” (contentment with one’s body) to mainstream media and selfies. What we learned about men—and about what shapes men’s body image—will surprise you.

There’s no denying that our bodies change as we age: a little extra weight, wrinkles, age spots, and gray hair are some examples. Some people struggle with their body confidence as they grow older; others embrace the changes and feel the same—or even better—about themselves as the years pass. According to our survey, men are more likely than women to be in this second camp (feeling the same or even better about their bodies as they age.)

Roughly one-quarter of respondents of each sex say their confidence level has stayed the same over time.

Factors that Shape Body Image for Men vs. Women

When it comes to how people feel about their bodies, a number of factors come into play. These are fairly different between men and women. Interestingly, neither gender ranks looking in the mirror, the way their clothes fit, or their health particularly high on the scale of importance. (However, these factors can impact those with an eating disorder or who are in eating disorder recovery.)

Instead, for women, social media is the top factor, followed by mainstream media (television and movies). The perceptions of other people are the next-most important: first, their significant other; second, their family member; and lastly, themselves.

However, for men, their significant other is the top factor in how they feel about their body—above both social media and mainstream media.

Everyone’s done it: Put on that well-practiced expression, click a few times from different angles, make a few tweaks, and then upload the most flattering photo to social media for friends and family to admire.

What about the one-shot wonders? Around 16 percent of men take a single selfie before they post, compared with 5 percent of women.

When it comes to editing the selfie, around half of men and 44 percent of women only take 1 to 3 minutes to make the desired tweaks. Around one-quarter of both genders take a little longer (4 to 6 minutes). Around 21 percent of women take 10 minutes or longer, compared with nearly 15 percent of men.

Surprisingly, when it comes to feeling validated on social media, men and women are quite similar: Just under half of both genders say they only need 2 to 20 “likes” to feel good about a selfie, and 28 percent of both genders report 21 to 41 likes is sufficient.

When people watch movies and TV, many viewers compare their own bodies to those of the stars onscreen. It was not so surprising to find that 88 percent of women make these comparisons. More surprising was the fact that a whopping 65 percent of men do as well.

Where the difference between men and women’s body image emerges more clearly, however, is with respect to the judgments they make when they compare their bodies to those onscreen: 51 percent of women say their body compares unfavorably, while only 37 percent of men say the same.

As the survey revealed, many people across the country grapple with poor body image. Whether they’re scrolling through newsfeeds, feeling awkward about wearing a swimsuit, or struggling to choose the best selfie to post, many men and women find it difficult to remain positive about their bodies. This helps to explain why at least 10 million people in this country, many of whom are men, reportedly suffer from a serious, potentially life-threatening eating disorder.

For those who struggle with body image, remember that body image is about how you see yourself. Perfection is not a goal; it is a tragedy that plays out every day. Learn that your body is one part of a whole package. You can be many things— and, maybe the best-looking guy is not as good as someone who takes care of themselves, laughs a lot, and is caring and compassionate.

Other people also remember you for many things—not just your physique—so don’t just focus on your body.  Wear things you love. Be a person who is fun to be around. Work as you can on your physical body, but please keep it in context.  You may be surprised that it is your thoughts and your flaw finding that really make you unhappy.  You get one body: do what you can with it, and then celebrate the best of the rest. You will find that what’s on the outside isn’t as important as you might think.

Facebook155Tweet1PinEmailShares156
wpDiscuz
Share this ArticleLike this article? Email it to a friend!
Email sent!