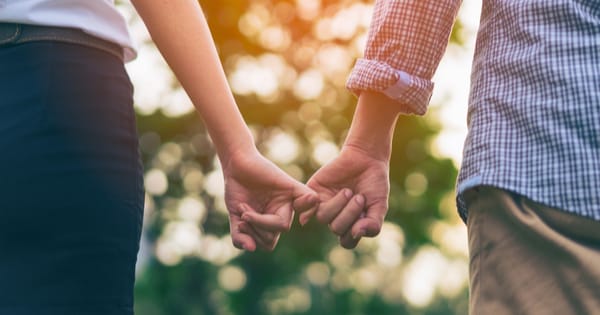 “Marriage is give and take. You better give it to her or she’ll take it anyway.” Sounds like a good prelude when penning down thoughts about the modern-day marriage, with just the right dose of humour sprinkled within. But once we give it serious thought, the statement looks more disturbing and less witty. Let me explain.

So I happen to be this happily married, 30-something girl enjoying the institution of marriage in its entirety. With its share of fun and laughter, tears and breakdowns, quarrels and companionship, ups and downs – basically all that a marriage entails. I would not like to believe we as a couple are in a 50-50 partnership as that seems to suggest we are incomplete by ourselves. The fact is we are not that. We were complete before we met and our coming together has only made that 100% that each one of us already had, even more solid. We are two different individuals but strongly connected through our common goals and most of all, bound by undying love and respect for each other. Sure, there is give and take within the relationship where we both give what we need to and we both take what we need to. And this is where I realize we are an endangered breed of a couple.

I look around myself, be it family, friends, distant or not-so-distant relatives and I see a new trend emerging and a quite worrying one at that. The notion of give and take has blurred out and it seems to have assumed a new definition. The harmless, beautiful give and take is no longer completely voluntary, rather it seems forced in many instances. With the new-age concepts of feminism and women liberation taking flight, some women seem to have taken these winds of change way too seriously. Somewhere riding on this transition and the new world order, many women have come to give a very twisted definition to gender equality. Many of them have conveniently used the ideas of financial, emotional and sexual freedom to emotionally exploit the other gender. In the name of gender equality, they have knowingly or unknowingly started playing the domination game. Translating this to the life of a married couple, I am increasingly witnessing women taking charge of the house and the man in not-so-pleasant ways. Many of the modern day wives are tactfully using their mind power, emotions and bodies to get their men to do anything they want. Be it doing household chores, walking behind their wives with their shopping bags, getting distant from their own family to keep their woman happy, the new-age men seem to be doing it all. And the worst part is – they are not complaining. While at this point, some of the feminists might want to jump the gun and put that gun on my head for showing the modern women in a bad light, let me clarify, that’s not the purpose of this write-up. I am a woman myself and still to hit my middle ages, officially. This is to say, I am a fairly young and independent woman with a modern thought-process and I am all for gender equality. But I am also a reasonable human-being before being a woman and I can’t help but notice when the gender card gets played for selfish interests, particularly by women.

This new breed of modern, independent women have come of age and brought a fresh streak of a confident, better-groomed and better-prepared self, no doubt. But many of them also seem to have brought in a new set of characteristics to the forefront such as unhealthy competition, jealousy, dominance, stubbornness, rigidity, and the works. When such women get into a married role, they bring the very same set of behavioral patterns, which are often self-centered, to the new home and the new family. And when these very individualistic traits start getting accepted and embraced by their husbands who are often blinded by ‘the love’ (or lust), that’s when the concept of an ideal give and take goes for a complete toss. This is when the house comes tumbling down, seldom unnoticed and by the time the affected parties realize, it’s already too late.  Some women manipulate or even tame their husbands and they happily align with the so-called modern woman and wife. Many men in this category lose their own voice in the deal, they lose their identity and individuality, lose family and friends but they seem to be lost in a spell. Nothing matters to them as long as the wife is happy and they happily resign to their fate. Don’t miss the word “happily”. Such men tend to lose objectivity and start behaving as if their entire reason of existence in the world is to please their wife! Some of these men let the lines blur so much that they are almost starting to coming across as effeminate or fem-men.

After seeing many instances of these lopsided relationships and tilting power-equations in the favor of the wives, I am forced to throw open this question to the modern day couples – “Was marriage not supposed to be a union of two individuals who come together by will and with a promise to build something beautiful together broadly based on the concepts of love, understanding, mutual respect and support for each other? Since when did love and marriage start translating into dominance and submission? Since when did marriage start to mean that the husband has to lose his individuality and personality to fit in his wife’s mold? Since when did marriage start transpiring into the man losing his earlier set of friends or the bond he shared with his mom or the equation he shared with a sibling?”

True love does not mean fitting in. True love rather means being your own person with an independent thought-process and being able to offer your spouse your love, understanding, support, and wisdom. And this holds true both for men and women. Following the same TV shows, pursuing the same hobbies, eating the same food, going on a diet-plan together, wearing coordinated outfits, going to the same places, meeting the same set of people – that’s not love. That’s just a game of one partner dominating and the other submitting. Very often, such couples start behaving as if they are conjoined twins and every thought and action of theirs is synchronized. Marriage has been and should always be about two individuals coming together as one but not losing touch with their individuality. New couples need to understand and accept that it is alright to pursue different hobbies, have different food preferences, mingle with a different set of friends, spend some alone time with your own respective families once in a while. Love cannot be and should not be restrictive. If it is, it is not love. And there is no mutual healthy give and take in such a relationship. Applying this to the current-age context in particular, it boils down to just what we started with – “Marriage is give and take. You better give it to her or she’ll take it anyway.”. This is a shout-out to the modern, educated, independent men. Please don’t let your marriage become that.

It’s alright to share responsibilities – be it financial, household-related or any other kind. It’s alright to serve breakfast in the bed to your wife once in a while or prepare that steaming cup of coffee for her every day, it’s alright for both of you to put money together to buy that new home theatre system you have been eyeing, it’s alright to spend time with her set of family and friends. But don’t become that man who regularly takes charge of the kitchen and finances while your wife chooses to sit in front of the tv, painting her nails and simultaneously browsing Amazon, looking to order that fancy outfit, at the same time shouting out to you and telling what you should wear for the evening party. Don’t be that man who doesn’t have a voice. Don’t be that man who can’t say NO to your wife. Please don’t be a slave to a slavedriver!

On parting notes, there is just one point and one message I am trying to drive home – Hey man, stay a man…!

Disclaimer: This article does not intend to suggest that all men are wired in the same way. Neither it aims to suggest that all modern-day women are tyrants. The article just directed at a certain category of modern men who have resigned themselves completely to the whims and fancies of their women and knowingly/ unknowingly have ended up living their lives just as a muse to their spouse and without a mind of their own. It’s a wake-up call for them and nothing else.

A passionate human-being who believes the truth should be told, always or almost always! A keen observant of the many shades of human behavioral patterns. An avid writer who strives to explore answers to the what, why and how of things. Last but not the least, an ardent supporter of the power of effective communication.

Facebook20TweetPinEmail2Shares22
wpDiscuz
Share this ArticleLike this article? Email it to a friend!
Email sent!