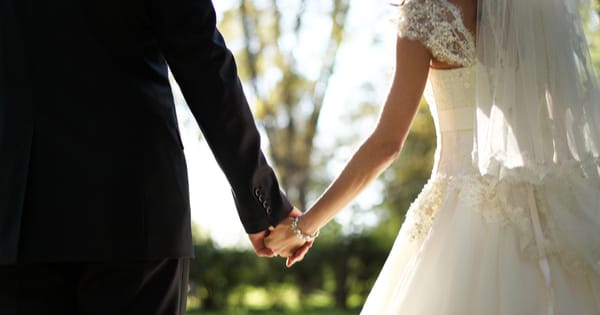 I’m a fan of marriage because it confers valuable legal benefits on couples. And that’s the case even if—or especially if—you end up getting divorced down the road. These benefits may not be the most glamorous aspects of marriage, but they are practical.

Having repeatedly witnessed the legal problems unmarried couples face when splitting up after years of cohabitation, it pains me when I hear young people say that they don’t want to get married. Unfortunately, many young people have bought into the idea du jour that marriage is old fashioned.

They give stock excuses for not marrying: “I don’t want to get divorced in the future” or “I don’t need a ring to make it official.” They think, “We’re already living together and have two kids. What’s the difference?”

Well, there is a difference. A big one.

Most likely they are scared of commitment. What they don’t realize is that by choosing not to marry, most of them are making a commitment by default—they are committing to a more financially precarious future.

Divorce Is Expensive; Foregoing Marriage is Often More So.

Marriage laws were not put in place to oppress you or make money for lawyers. Actually, it’s the contrary, they were put in place to protect both partners in a relationship. That’s what cohabitation and marriage is—a partnership.

If a couple were to go their separate ways, marriage laws protect both partners from being left empty-handed or hung out to dry.

That’s the way it used to be hundreds of years ago. In a divorce, the man would get everything: the property, the money, and the kids. The woman? Nothing. Marriage laws were put in place to protect women and children. Now they are just as likely to protect men, as more and more women are out-earning them.

Couples tend to think that if they don’t commit themselves to marriage, they will avoid a messy split. But, strangely enough, marriage laws make splitting up easier for couples in serious long-term relationships. For example, many non-married couples purchase homes together. Any idea how difficult it is to divide a house outside of a divorce? Partition action anyone?

No marriage certificate means no protection. If the relationship ends there is no true way to divide assets legally and fairly.

To appreciate the legal importance of marriage, you have to consider how cohabitating couples actually live their lives. They don’t continue to operate as singletons. They act just like married couples.

After 5 or 10 years, the average unmarried couple’s life is going to look almost identical to that of an average married couple. They will have bought a house together, had children, and, as my experience informs me, at least one of them will have sacrificed their career to some extent for the good of the relationship. You can’t take a promotion if it means moving to another city or state.

If a couple has children, one of them will almost certainly sacrifice his or her career to care for them. Childcare is expensive and, for most couples, it will make financial sense for one person to either cut back at work or stay home, at least for a while. The other person will continue to work and contribute to his or her retirement account.

Of course, no one anticipates their relationship ending as they move boxes into their new home, or they spend their weekends fixing the siding of their house, but the truth is life takes its turns.

And, without a marriage certificate, these turns can leave one partner with no car, no house, and in some cases no career. If you put tireless effort and money into your partner’s home and the two of you split, there is no way to provide you with any of the assets from the home or refund you for the work you put in. If the shared home is listed under your partner’s name, that entitles you to well—nothing.

I have seen clients come into my office expecting a fair division of their assets with full benefits because they have been together (but unmarried) for 10, 20, or more years. Although that may seem reasonable, I have to break the bad news to them. No marriage means no rights. If the house is in your ex-partners name, too bad for you. You didn’t contribute to your retirement account? You’ll have to put off retirement, if you’re able to retire at all.

Think this won’t happen to you? You’re wrong. Life happens and no one thinks to dot their “i”s and cross their “t”s until it’s too late.

Don’t Give Up Free Money

Not being married also means giving up free money from the federal government. And I’m not talking about the yearly tax benefits most married couples enjoy, although those are important too.

If you have been married to someone for ten years or more, you can collect on their social security earnings record at retirement if one-half of their benefits are greater than your retirement benefits. It has no impact whatsoever on the other spouse. This is a huge and totally free benefit from the federal government. It is especially beneficial for couples where one of the parties makes significantly more money than the other.

It’s an important benefit for couples whether or not they divorce. However, it’s typically more important to the lower-earning spouse in the event of a divorce. But if you’re not married, you can’t earn this benefit.

Till Death Do Us Part.

Most people who shun marriage do so to avoid divorce. But what if you part at death?

Again, not being married means no protections.

If you and your partner have built a life together, supporting one another, your finances will almost certainly become intertwined. From Netflix accounts to childcare costs to rent or mortgage payments, it all becomes jumbled. At the time, it doesn’t seem to matter, you’re happy.

But god forbid something happens to one of you, and the other is left alone to stabilize your finances and the future. If you’re not married, you can’t inherit from your partner’s estate unless he or she was careful and drafted a will leaving you their property (which is highly unlikely if you couldn’t even bother to get married). You can’t collect your partner’s retirement funds or life insurance benefits unless you’re named a beneficiary (if you’re married you have to name your spouse as beneficiary). If you’re not on the deed to the house with a right of survivorship, you’re out of luck.

Marriage allows you to avoid these pitfalls. Only under the marital laws, built to withstand just about anything, can each person be in a relationship be guaranteed security.

If you’re serious enough to be cohabitating and building a life together, get married. Protect yourself. Protect your partner. And don’t fear divorce. The benefits of marriage significantly outweigh the misfortunes of divorce.

My name is Kevin Handy and I am a divorce attorney and partner at Cooley & Handy in Bucks County Pennsylvania. I focus my practice in family law, including in divorce, custody, and support matters as well as family law mediation.

Facebook259TweetPinEmail1Shares260
wpDiscuz
0
0
Would love your thoughts, please comment.x
()
x
| Reply
Share this ArticleLike this article? Email it to a friend!
Email sent!