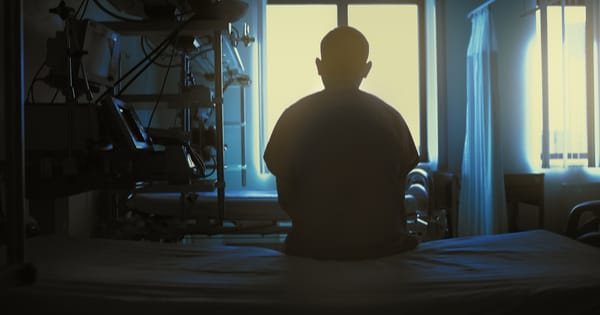 The sheer powerlessness you feel when you’re admitted to a psychiatric unit for the first time is terrifying.

Let me begin by saying, I have been diagnosed with Schizoaffective Disorder and Generalized Anxiety Disorder. I work with, and have been working with therapists and clinicians for years regarding my mental illness. I live a full life and have recovered from this first hospitalization.

It started when I was 23 years old. I was a loner and spent most of my time in my room at my parent’s apartment online. I began hearing voices (auditory Hallucinations) during this time and had many paranoid delusions because of it. I didn’t know up from down concerning mental illness at the time. I didn’t tell anyone about the voices because I thought I was being bullied by people in town. My paranoia led me to believe that the neighbors at my parents’ apartment complex were after me, and the voices emanated from their mouths. This, in itself, was incredibly scary at the time. I finally reached out after two weeks of this, but I did it in a way that got me in trouble. I broke a window, screaming for the voices to shut up. I was arrested and taken to the local E.R. where I was told that my mind was playing tricks on me. I was suspicious but went along with the program.

I was given several sedatives but eventually had to have an injection administered into my right hip because no one was giving me any explanation of why I was being kept there. I didn’t notice the sign on the wall, which said, “You are being held here because you have been deemed as either a threat to yourself or someone else. You are free from the use of electroshock therapy.”

I woke up with what I’ve been told was a day later and given breakfast. I was in a room with a bed, blankets, and a steel door. Like in my room, I didn’t know up from down, but I didn’t hear a single voice. Looking back now, I can see that the medications they gave me were working. I exited the room, still lightheaded and dizzy from the new medication. There were about 5 other people in the room, one frail elderly woman with a patch on her arm said hello to me. There were 7 steel doors in total, and a central, “Station” where 4 plainclothes nurses and 1 doctor in a white coat resided. They were enclosed in a shatter-proof window. There were two doors on either side of them, both of them locked. I didn’t say much and just sat down at one of the tables, scratching my head and talking with the other patients. I asked one person how they got there; she replied, “From the local Jail.” (At this point I didn’t know what to think, and I was getting scared.) One of the nurses finally came and sat by me and told me that I was in a Psychiatric Unit. I was given a white leaflet of paper with meal choices on them. I checked some boxes with a rubber pencil they had let me borrow.

I stayed in my room mostly and heard fighting amongst the others quite a bit. It turned out that I wasn’t the only person who didn’t want to be there. I met several people and learned their names. As the day passed and meals were situated, the room became friendlier as we began playing board games. I discovered that there was even a television we could watch at certain times.

I didn’t know it at the time, but I was in what they would name, the “Secure Unit” part of the Psychiatric Unit. I now know that it is for people who are still not stable enough to be trusted around pencils or anything that you can potentially hurt yourself or another with.

As several days went by, I made several friends while in the secure unit. We played Boggle (One of my favorite games) and watched movies. There were several shouting matches between patients and staff, but for the most part, it stayed low-key. Every day I would stand at the door, looking through the sliver of see-through window, at what I didn’t know at the time, was the “Open Unit.”

In this unit, people had visitors, could go to group classes, and even be trusted around the fish tank.

I made it to the Open Unit several days later and was placed in two person room with a nice fellow.

I had injections administered during this time, new medications, which helped (and still help) a lot.

There are things to do in a psychiatric unit, such as exercise, eat, some places even have books. Socializing is also a good thing to do if you can find someone you like.

I was diagnosed by two different psychiatrists, which is what it takes in the State of Oregon to be deemed as having a mental illness. I never could track down the doctor I was assigned to because he was always busy. The one thing you want in a psychiatric unit is to know when you are getting out. And when you’re on hold, there are only rough estimates.

I was startled by this realization, that I had a mental illness. I thought for sure, at that moment, that all my dreams and goals were over for me. I was dead wrong.

Fast-forward 4 years later, and I am a small business owner, a college graduate, an internationally published poet, author, and proud patient of an outpatient facility. I’ve had several more hospitalizations since then, but none nearly as haunting.

What I want you to know is, just because you’ve been given a stone to carry, does not mean it will crush you.  If you ever find yourself in the position I was in, please have faith. Having a mental illness is not the end, nor is it a reason to give up. You can be given amazing opportunities to meet wonderful people, connect with local groups, and learn more about yourself. My heartfelt advice is to reach out if you feel like you’re having problems. All of the stigma surrounding reaching out is unsettling, yes. You worry about what your friends, family, co-workers, etc. think about it. But trust me, as someone with years of first-hand experience, that they will love and accept you anyway. It’s worth it.

The line sits at the pseudo-God’s feet, as he sits behind a reinforced window, ready to hand out medications

I sit idly, scratching the barcode strapped around my wrist

the only 3 things to look forward to

when you’re on hold in a psychiatric unit

Back to the line,

We stand as orderly as twin towers, waiting to swallow our next round of medication

I learned that the blue pills

give you the best high,

whereas the white pills make you itch

Medication is different for everyone, and I was learning the best

at me, yelling, “Get out of here when you can.”

I look away from it, and continue pacing around the 30×30 common room

Another inpatient is rattling his head off about the government being after him.

He literally yells all day long, for hours about the same thing.

To the line again,

and demands that he talk to his lawyer. He then runs to his 10×10 room, equipped with metal door

and begins flipping over his mattress.

If there was a Jesus on this tiny secluded island of sterile floors and reinforced steel,

it would be him

The orderlies act fast, and scream to one another,

“Grab the injectable, we need him settled down”

Lockdown means how it sounds.

It means you cannot leave

It takes a certain amount of dissociation to be able

to live under the tight, freezing cold conditions

I guess that’s why those who don’t know,

and those who think they know, but don’t really know

Not because we’re weak, or dangerous (Though some of us are)

and rise from our inner caskets, like a sort of Lazarus who eats and waits in line just to pass the time

Adam Levon Brown is an internationally published poet in 14 countries. He is the author of twelve poetry books. He identifies as Neurodivergent and Queer. He has had his work translated in Spanish, Albanian, Arabic, and Afrikaans. .

Brown is founder, owner, and editor-in-chief of Madness Muse Press LLC, a literary publishing press dedicated to enacting social change through the power of writing.

Facebook14Tweet1PinEmailShares15
wpDiscuz
Share this ArticleLike this article? Email it to a friend!
Email sent!