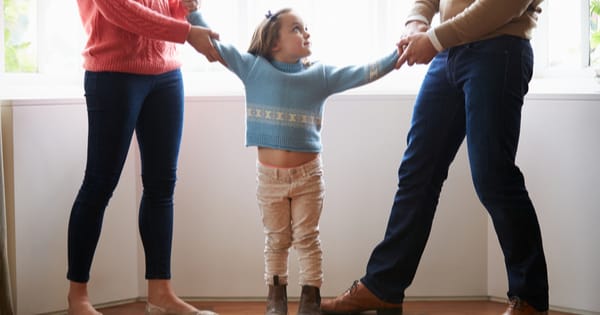 Nearly everywhere you look online, you’ll find article after article extolling the virtues of co-parenting post-divorce. In fact, some even hint if not outright state that the only way to make sure your kids adjust well to the divorce is if you co-parent.

And many divorce professionals tell their clients that co-parenting is the best way to parent after divorce.

So if you’re divorced or separated and co-parenting isn’t working for you, it’s easy to understand why you might be feeling like a failure.

Yet, before you sink (deeper) into depression being afraid you’re screwing up your kids, you need to know there are some very valid and legitimate reasons why co-parenting doesn’t work for everyone.

This list of requirements is fairly daunting – even if you had an amicable divorce or consciously uncoupled. But if your divorce was strained or even high-conflict, you can start to get an idea of why co-parenting doesn’t work for you.

So, why doesn’t co-parenting work for all couples post-divorce? Here are 13 really good reasons:

1. At least one of the parents has an active issue with alcohol, drugs or other substance abuse.If a parent suffers from substance abuse, they are simply not able to be consistent in their parenting because their cognitive abilities are impaired and their behavior can be erratic. There’s just no way to predict when or if a parent with substance abuse issues will be able to behave in the ways necessary to successfully co-parent.

If your child’s/children’s other parent has an active abuse problem, then there’s absolutely no way you can co-parent with them.

2. One parent is incarcerated.

If this is the case, it’s impossible to co-parent because one parent is unavailable to parent.

3. A parent is violent or has threatened violence against and adult, child, pet or property.

A violent parent is not a fit parent. They are not in control of their emotions or behavior. At a minimum, they are not capable of co-parenting. They may not be capable of parenting either.

4. A parent has inappropriate sexual or other acting out behavior.

To co-parent successfully, parents need to be on the same page. If one parent behaves inappropriately and could harm the child/children, then there’s no way to co-parent. And maybe there’s no safe way for this parent to parent either.

5. One parent has a restraining order against the other.

A restraining order reflects a high level of mistrust and/or fear. It also means that legally the parents aren’t to communicate. And this will prevent co-parenting.

6. A parent neglects or has abandoned their child/children.

If a parent is unfit or unwilling to parent, then co-parenting isn’t an option.

7. A parent has a history of frequent, unexpected moves or plans to move out of the area.

When a parent is prone to moving frequently or unexpectedly, they are not able to provide the stability children need for successful co-parenting. If a parent plans to move out of the area, their move will prevent co-parenting. They won’t be able to spend the time necessary to co-parenting their child/children.

8. One parent is engaging in parental alienation and poisoning their children against the other parent.

Parental alienation is a horrible thing because it denies children a safe relationship with either parent. The alienating parent is demanding allegiance from their children at the expense of any relationship with their other parent. When this type of dynamic exists, there’s no way to have the open communication necessary for co-parenting.

9. A parent can’t rise above their anger at, resentment of and/or jealousy of the other parent.

When a parent is stuck in strong, negative emotions about their child’s/children’s other parent, these feelings prevent consistent, collaborative communication. And co-parenting is impossible.

10. The parents are incapable of collaboration.

Co-parenting requires collaboration, but so does marriage. If a lack of collaboration was prevalent in the marriage, there’s no reason to expect that once the couple separates and divorces that they’ll suddenly be able to collaborate. Parents who have never been able to work together, won’t be able to co-parent either.

11. At least one parent is trying to control the other.

When there are power struggles between the parents, it’s not unusual that the children are used as pawns. These types of struggles prevent the collaboration and communication required for co-parenting. They also show that the controlling parent has a lack of respect for the other parent.

The term narcissist is thrown around quite casually these days. It’s actually a fairly rare condition, as are sociopathy and psychopathy.However, if a co-parent truly has one of these rare conditions, it is beyond their capabilities to co-parent. And it shouldn’t even be attempted.

13. At least one parent is emotionally and/or mentally abusive of the other parent.

Abuse is the ultimate sign of disrespect. And without respect, it’s impossible to co-parent.

If co-parenting isn’t working for you because it can’t (at least right now), that doesn’t mean that your children are destined to be screwed up. What it means is that you’re going to have to be the strong parent that they can always count on – even if it makes you unpopular at times.

It’s by parenting your children with consistency and structure post-divorce regardless of whether you’re able to successfully co-parent with your ex or not that your children will continue to grow, thrive and blossom into the wonderful people they’re capable of becoming.

END_OF_DOCUMENT_TOKEN_TO_BE_REPLACED

Facebook166Tweet1PinEmailShares167
wpDiscuz
Share this ArticleLike this article? Email it to a friend!
Email sent!