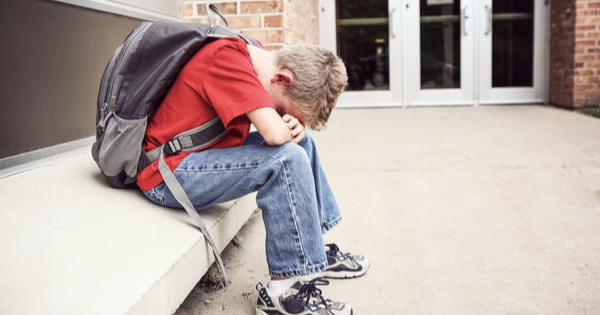 It is normal for some kids to be afraid of school. It’s also normal for their parents to not understand the reasons why. To begin with, parents are more concerned with adult responsibilities, like work and taxes and trips to the dentist. They tend to forget the bad stuff that happened in school.
Time has a way of distorting memories. Adults also have fully developed cognitive abilities tempered by experience and wisdom. In other words, they have had perspective. They see childhood experiences as moments that molded them into who they are today.
Not so with school-aged children, who experience this menace in real-time. While some kids adore school, many buckle under the stress. Many kids learn to fear school. Many kids learn to hate it.
School is also a child’s primary source of social interaction. This is great for extroverts, but not for those who struggle with social situations. If your child fears school or refuses to go, it’s important that you try to understand why they feel the way they do. Here are 3 things to keep in mind:

1. For many children, school is torture.

Children have no control over their lives. They have no say in the school they attend, the teachers to whom they are assigned, what they eat, or even when can use the bathroom. Imagine being in that situation. Many mental health issues stem from feeling like we have no control. In fact, it’s often a main source of anxiety for everyone.
For children, they really do have no control and they know it. High achieving students seem to accept this. They even thrive in settings where structure and consistency provide motivation and security. But what if a child has a learning disability or an attention-deficit disorder? For them, the exact opposite becomes true.
As adults, we’ve all had experience with burn out from jobs or frustration with bosses. While it is not easy, we do have the option to quit and work somewhere else. But children are stuck. They have no choice but to remain in their school, regardless of how miserable the experience. They don’t have the option to make a career change. They are stuck in that situation for twelve years!
Children lack sophisticated coping skills. They don’t know how to regulate their emotions or use healthy coping skills to reduce stress. As a result, there’s a relationship between poor academic performance and bad behavior. If a child has language problems they are going to get frustrated in their Language Arts class. So they act out, because misery sucks, especially when you have no control.
What’s going on here is something psychologists call “learned helplessness.” The term describes the hopelessness that occurs when a person believes a problem has no solution. If a child has lost hope, is it a surprise that they would fear school or even refuse to go?

2. Their Perception of School is Their Reality

Our perceptions are unique. The facts of a situation don’t matter as much as our interpretation of those facts. This is why some combat vets develop post-traumatic stress disorder and some don’t. Trauma is not about the event. It’s about our perception of it. Whether we’re talking about a car crash or a school bully, trauma is in the eye of the beholder.
In 2017, The Society for Disaster Medicine and Public Health published a study about resilience in the wake of natural disasters such as Hurricane Katrina in 2005 and the Deepwater Horizon oil spill in the Gulf of Mexico in 2010. They found a “significant inverse relationship between psychological resilience and depressive symptoms and a significant positive relationship between community resilience and psychological resilience.” In other words, attitude matters.
People who experience trauma (e.g., a hurricane or a school shooting) tend to fall into one of two categories. The first category is the Victim. People who are “victims” tend to see themselves as helpless and unable to control the outcome.
The second category is the Survivor. People who see themselves as “survivors” tend to draw strength from the experience. They recognize that a terrible event has happened, but they don’t feel helpless because of it. In short, victims perceive helplessness whereas survivors perceive strength.
Does your child see themselves as a victim or a survivor? Bad things happen to victims. Survivors persevere. While attitude is not the only factor, self-perception fuels self-esteem.
Children sometimes adopt the “victim mentality” for very real reasons. Bullying is a good example. Bullies come in many forms. Adults tend to think of bullying as a “kid on kid” crime. But teachers, coaches, and administrators are capable of bullying, too.
Educators are human beings and are thus subject to the same failings as the rest of us. They can play favorites, hold grudges, and even dislike certain children. If a child perceives that a teacher “is out to get them,” it might as well be true. And of course, there is also the reality of “same age” bullies who may often threaten actual physical harm.
The point here is that it doesn’t matter if a parent thinks their child’s distress is valid. The only thing that matters is how the child perceives what is going on in their world.

3. Children Suffer from Social Anxiety and Panic Disorder, Too

We all experience anxiety from time to time. Anxiety is often appropriate and even healthy. But severe anxiety can impair our ability to function. Children are just as susceptible as adults.
Social anxiety is something with which many school-aged children suffer. It’s effects can be debilitating. It presents as marked fear or anxiety in social functions (e.g., school). Sometimes social anxiety becomes a “phobia.” Phobias are irrational fears that cause significant distress.
The keyword there is “irrational.” If a child gets bullied at school, their fear of being bullied is not a phobia. It’s a normal response. It’s also not something that will go away in time. Parents need to treat mental illness like any physical illness. They both need treatment, or things will get much worse.
Anxiety disorders affect a whopping 40 million people in the United States. These include PTSD, Social Anxiety, Panic Disorder, Generalized Anxiety, Phobias, and Obsessive-Compulsive Disorder. Both children and adults are susceptible.
The key here is that social anxiety disorder and panic disorder and phobic disorder are mental illnesses. They don’t respond to traditional parenting techniques or behavioral consequences. For some children, these disorders are overwhelming. Often, professional intervention is a must.
Parents should be aware that some children are legitimately terrified of school. Forcing them to go without offering them help encourages nothing but failure.

What should a parent do if their child refuses to go to school? Here are some suggestions to help parents make a decision that is best for their child.
1. Listen. Kids are often prone to exaggeration, but what they have to say is always telling. Ask questions. Use reflective listening skills. If your child says “I hate school!” say something like “So, I hear you saying that school is difficult and upsetting for you.” It may sound trite, but it will let your child know that you hear what they are saying.
2. Adults and children think differently. Children under the age of 12 have difficulty understanding abstract concepts. Telling an 8-year-old that they are jeopardizing their future is a waste of time. Instead, focus on the here and now. If a child struggles with social anxiety, practice with them. Remember, children are experiencing these issues for the first time. They lacks your experience and perspective.
3. Take all accusations seriously. If your child tells you that they are being bullied, report it to the school. If your child tells you that an adult has made sexual advances, contact Child Protective Services. Call them through your local sheriff’s office.
4. Consider finding a qualified play therapist in your area. Play therapy is quite effective with children. Children communicate through play, so therapists use play as a therapeutic intervention. Play builds self-esteem and self-confidence and gets to the root of the problem. Play therapy equips both parents and children with tools for emotional regulation.
5. In some cases, there is a medical component to maladaptive behaviors in children. Hyperthyroidism, for example, looks a lot like depression. Hyperactive children often have an issue with their brain chemistry. It is often beyond their control. A medical professional can determine this. At the very least, it is wise to rule out any underlying medical causes for behaviors.

Adults tend to downplay the stress of childhood. We romanticize it and minimize it, often writing off things as a simple rite of passage. We expect children to have an adult perspective, which is unfair. Children don’t have the benefit of wisdom or experience.
Children rely on their parents for guidance, strength, and direction. Their problems may not seem as daunting as the ones faced by adults, but to them they are overwhelming. Provide them the support and resources they need while they are young. The resiliency they develop will be the difference between success and failure.

—
Originally published here and reprinted with the author’s permission.

Facebook9Tweet2PinEmail1Shares12
wpDiscuz
Share this ArticleLike this article? Email it to a friend!
Email sent!