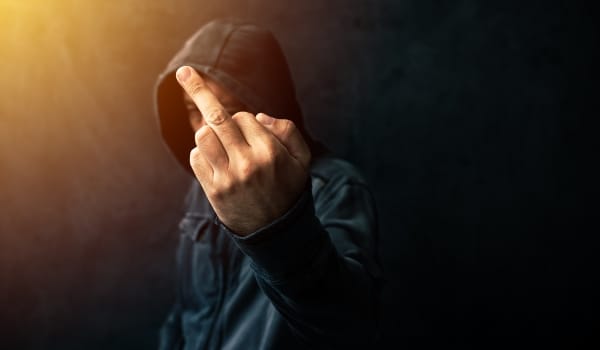 In the heat of his run for second term as Jakarta’s Governor, Fauzi Bowo sparked controversy when netizens exposed his picture giving a middle-finger salute.

The incident took place two weeks ago when the governor attended a youth event at Bung Karno Stadium in Jakarta. As he stood between a girl and a boy, he was seen raising his middle finger imitating the girl’s gesture. Instead of earning admiration for supporting an event organized by young people, Fauzi, or more popularly known as Foke, was seen giving a bad example instead.

As netizens expressed their shock and rage over the “indecent” behavior, Foke’s spokesman said that the governor was only joking among young people who gathered for a band competition event. The governor claimed that he doesn’t “understand those kinds of things”.

Many netizen can’t hide their surprise:

Translation Original Quote
@vankaay: Just realized, Mr. Fauzi Bowo’s showing his middle finger when being around with bike community members. Do you want to mingle or don’t you know what it really means?

Translation Original Quote
@ariefadjar: The campaign slogan for Fauzi Bowo is ‘Foke You!’ with showing up middle finger.

Pangeran Siahaan wrote a column on the issue and tried to understand:

With his middle finger raised and the fatherly smile glued on his face, the same smile that can be seen on billboards around the capital, the governor looked cool and firm. It’s some sort of a non-verbal communication that reflects his thoughts on the people….

…What was a little bit baffling is that wasn’t what the governor was thinking when he gave the gesture. His staff clarified that Fauzi wasn’t aware of the figurative meaning behind the middle-finger salute and he was just imitating the band members standing next to him.

Jakarta’s election will take place on July 11, but Foke has not been attending public debates with other candidates. After not showing up for a television debate, he also turned down a chance to face an open debate in University of Indonesia last week.