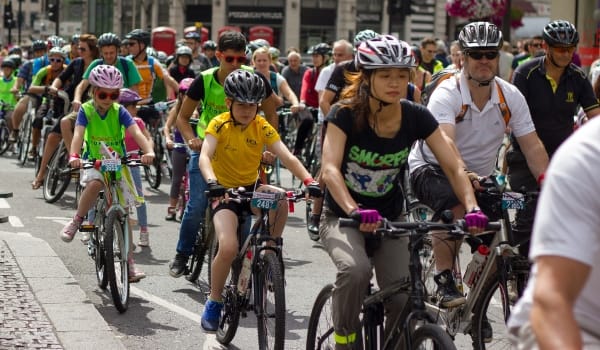 On April 28, 2012, a group of cyclists, among them a civic organisation named Bicitekas [es], organised a bike ride which would depart from the emblematic ‘Angel of Independence’ in the heart of Mexico City, heading towards the so-called ‘Supervía Poniente‘ (Poniente Super-road) [es] in protest at the construction of the latter.

At some point along the way, local police detained a group of six cyclists, according to Mónica Tapia A. [es] (@monicatapiaa):

Translation
Are you following #fleshandconcrete? Six cyclists @[email protected] were detained and beaten for going up to the second level of the super-road #2dopiso #supervia

The ‘Supervía Poniente’ is a project led by the left-wing government of Marcelo Ebrard [es], leader of the Federal District Government. The road aim is to link the south of the city with the area of transnational corporations located to the west of the city in a district known as Santa Fé.

Santa Fé has witnessed a rapid growth in its floating population, and it is for this reason that it has become a real ordeal for those who work there to drive to work everyday due to high levels of traffic. The ‘Supervía Poniente’ aims to be a solution to this problem, but it has attracted criticism from activists who argue that the works will have a serious environmental impact.

The bike ride which took place on Saturday, April 28, was just one of the protests against the construction of the road which have been carried out.

However, according to statements from witnesses which have been posted on Twitter, the police were seen clashing with cyclists. Jorge A. G. Matalí [es] (@elMatali) reported:

Translation
They’re trying to arrest a cyclist to intimidate the rest of us #fleshandconcrete http://instagr.am/p/J-u0DrPz5I/

Translation
Our bike ride is peaceful, we are exercising our right to circulate in the city. #FleshAndConcrete #CarneyConcreto #Bici

According to Daniel Gershenson [es] (@alconsumidor), the police made threats:

Translation
After the melée (in which a policeman even threatened to “call the riot police”), the #FleshandConcrete bike ride continues towards L Cabrera [Avenue to the south of Mexico City]

Jordy M.Y. [es](@jordy_my) reported being taken to an office of the Public Ministry:

Translation
Following a dispute which ended in an aggression by the traffic police, we are at office 45 in Álvaro Obregón. #fleshandconcrete

This fact angered some Twitter users, who question the coherence of a government which “promotes” the use of bicycles, as Juan Pueblo [es] (@ElcondeGiovanni) points out:

Translation
Coherence and common sense, the use of bicycles in Mexico City is promoted, but it’s not permitted to pedal in fast lanes and on second levels #FleshandConcrete

For Kar (@Karkarkarrr) the police actions are negative:

Translation
Such repression from @m_ebrard‘s government is disgusting and unjust. What harm are we doing? Why detain us? #fleshandconcrete

The capital’s government has not yet made a statement on the issue, and its head of government Marcelo Ebrard [es] (@m_ebrard) seems unworried when he tweets:

Translation
Fifteenth-birthday celebrations 2012 in the National Auditorium, 347 participants
These events will continue to provoke discussion, especially considering that the campaign for leadership of the capital’s government was due to be launched just a few hours after the clash.