How does the current political system affect our lives? An important Call for Submissions from The Good Men Project.

2016 was a Presidential Election year in the United States. It was not just a historic moment for the US—but it has had a huge impact on countries all over the world.
We want and need your voice in this conversation. Tell us what you think about politics and how it creates social change—-for better or for worse. We want your voice no matter where you live in the world. The conversation is important everywhere.

Already have an idea of what you want to write about? Jump here to our submissions portal.

Not sure where to start? Below are some ideas.

1.) What differences do you see in your everyday life since the last election?

2.) “Bad officials are elected by good citizens who do not vote.” Discuss this quote by George Jean Nathan

3.) How should we address today’s tough and divisive political issues, such as dealing with the effect of institutional racism and misogyny in our policies, the economic pain being disproportionately felt by many ‘old economy’ manufacturing workers, gun control, immigration policy, women’s reproductive rights, etc.

4.) John Oliver once said “If you want to do something evil, put it in something boring.” How do we keep our eye on the ball and motivate to take on the “boring” but crucial political issues like gerrymandering, voter registration laws, money in politics, tax loopholes, statutes of limitations on crimes, etc. especially in today’s era of sound byte, sex appeal journalism.

5.) Today, on so many of the social change trigger issues — gun control, abortion, education, disparate policing and police violence towards people of color, immigration — there seems to be an entrenched polarization between the sides that crushes any attempt at effective compromise or progress. Why is this, and how do we overcome it as a society?

6.) Canada’s Prime Minister, Justin Trudeau, has a ‘coolness factor’ as well as as a very overt policies on tolerance and equality. Why does his success seem so hard to replicate?

7.) What do you think politicians should be talking about when it comes to boys and education? What is the change you would like to see?

8.) Are our politicians and voters still caught in the concept of the “the man box” when it comes to leadership? What are its implications?

9.) Some have described Trump and his administration as the living embodiment of “toxic masculinity” – complete with bullying, anti-intellectualism, and misogyny.  If this is the case, what do we do about it?

10.) Some describe the times we are living in as a time of great change for white straight men, with the rise and cultural popularity of causes associated with feminism, LGBTQ issues, and combating racism.  This era can have an ugly underside that clings to old values. What other possible reactions and evolutions are possible?

11.) Above is an image of all of the past Presidents of the United States. Imagine, for a moment, they were all women. Every single one of them, every tiny face was the image of a woman instead of a man. Would you think that was “normal”? Discuss.

12.) Some describe being “PC” simply as being nice and sensitive to legitimate concerns, while others describe PC culture as a scourge that is destroying our country. What is the future of this debate and how should we resolve the concerns on both sides?

13.) In the historic year when the Presidential contest is between a man and a woman, is it a coincidence that each has unprecedented unpopularity with voters of the opposite gender?

14.) People seem to like Trump because they see he is “successful” by our cultural standards. He’s wealthy; he says and does what he wants, and he has a hot wife.  In some weird way, it aligns with the distinctly individualistic streak that is unique to Americans. This whole him against the system/institution thing.  It makes him ‘heroic’ to be able to get away with it all; it’s admirable, in a perverse way. Are these attributes ones that need to change in order for us to move forward as a society?

15.) “The measure of a man is what he has done with power.” Expand upon this as you look at politicians—-from any country in the world.

16.) Donald Trump is trying to do social change by normalizing what he wants – that IS “Make America Great Again” (for white men).  It’s the same thing that we’re trying to do — but with different values. And that means normalizing xenophobia, islamophobia, racism, and bullying. We shouldn’t be surprised that the result HAS been cultural change — a more emboldened populous.  We will see more lying, more bullying, more sexual harassment, more anti-immigrant bias (you’ve seen the incidents of kids chanting ‘Trump! Trump! Trump!’ and ‘Build that Wall’ when their school plays a heavily Latino team in basketball), more racism, more misogyny, and more sexual harassment if he’s the role model.

Does his blatant misogyny cause actual change? Here’s something that has been happening to me lately, which had me puzzled in the same way I had been puzzled about Trump supporters. In the past 48 hours, I have been sexually harassed 3 times. Once on the street, once by someone I had just met (at social gathering which I believed was super-safe), once by an ex. I felt uncomfortable in ways I haven’t felt in years. I couldn’t figure out WHY—those who have met me in person are probably just as puzzled. I’m old! I’m not attractive! My usual clothing is a grey sweatshirt and a bike helmet! How could this be happening to me! And then it clicked. Is THIS is the world women will be living in if Trump isn’t stopped—and stopped in a big way? This is what happens when you allow misogyny at a very high level.

Do you believe your life has changed for the worse, on a day to day basis—-with or without governmental policies as the catalyst for that change? Describe what your life might look like if things become worse than they are now.

17.) Le’s flip to the light. What is your vision for the future? No matter how hard it might be—no matter how impossible it might seem to make it happen—what is the world you want to live in? Be very specific.

Please note—these are thought-starters only! We are really looking for stories about the kind of change you want to see in the world, and how politics affects that change. Submit by clicking on the button below, and you’ll get easy access to our Submissions portal as well as guidelines and TOC.

Other ways to connect with The Good Men Project Community:

Click here to become a Premium Member – of our growing Community! Get  access to our Premium Member Community on Facebook, Ad-Free viewing of our site, Writer’s and Editor’s training  and more!

Want more prompts like these—about a variety of topics that relate to men? Sign up for our Writing Prompts emails, you’ll get ideas directly from our editors every Monday and Thursday. 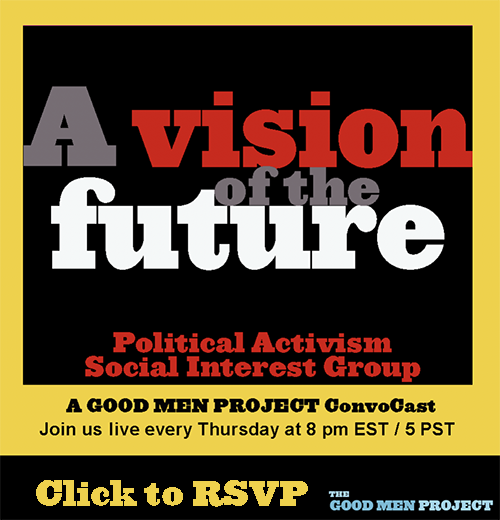 Like to talk Politics? Good Men Project members get together by phone every Thursday evening. Join us!
RSVP for Political Activism Calls

1. Free access to any ONE Social Interest Groups.Try them out! We have active communities of like-minded individuals working to change the world on important issues. Weekly facilitated calls that lead to the execution of real-world strategies for change. Complete schedule here, with new ones starting all the time.
2. Free access to any ONE of our live classes. Each month, we have the following: Learn how to be a Rising Star in media, build your own platform, become an advanced writer, become an editor or create social change. Check out our classes here. RSVP for any one class—if you want to take more, just upgrade to an Annual Platinum Membership.
3. Invitation to the MEMBER-ONLY Good Men Project Community on Facebook and all Weekly Friday Conference calls with the Publisher and community. Connect with other members online and by phone!
4. An ad-free experience. No banner, pop-up, or video ads when you are logged in.
5. GOLD commenting badge. Only members can comment on the website!

“Here’s the thing about The Good Men Project. We are trying to create big, sweeping, societal changes—overturn stereotypes, eliminate racism, sexism, homophobia, be a positive force for good for things like education reform and the environment. And we’re also giving individuals the tools they need to make individual change—with their own relationships, with the way they parent, with their ability to be more conscious, more mindful, and more insightful. For some people, that could get overwhelming. But for those of us here at The Good Men Project, it is not overwhelming. It is simply something we do—we do it with teamwork, with compassion, with an understanding of systems and how they work, and with shared insights from a diversity of viewpoints.” – Lisa Hickey, Publisher of The Good Men Project and CEO of Good Men Media Inc.

END_OF_DOCUMENT_TOKEN_TO_BE_REPLACED

Facebook8.5kTweetPin3EmailShares8.5k
wpDiscuz
Share this ArticleLike this article? Email it to a friend!
Email sent!