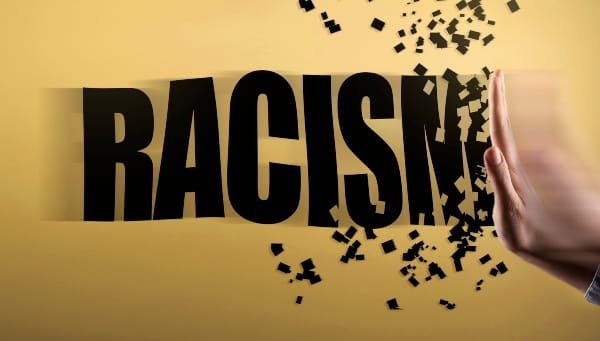 Recently, Donald Trump came to Louisville, where I live and work. I wasn’t wild about it, but it’s a free country. If he wants to bring his circus to town, I reasoned, as odious as that seems to me personally, he should have that right.

But when I saw the video of a young African American woman at the rally being hounded from the hall by people who physically pushed her out, who screamed obscenities at her, of course I was appalled. Kentucky has enough problems without confirming the rest of the world’s suspicion that we live in a backwater that grows lab cultures of racism so virulent that all the civil inoculations we’ve tried to administer can’t hold it back. But I was also saddened by that display of racism, because it not only pointed up the weakness of our cultural immune system, I think it compromises it even further.

I have maintained for some years now that we can get some tentative sense of our war on racism by the extent to which it has become increasingly difficult to be publicly racist. Let me be quick to add, I agree with the argument that just because it’s more difficult to express the explicit prejudices embodied in things like Jim Crow laws and anti-voting legislation, it doesn’t mean civil rights work isn’t still necessary. In many ways, we’ve simply pushed that racism underground. And in so doing, we’ve made it if not stronger, then at least much more difficult to fight.

However, prejudice is a but symptom of racism. It would be nice if we could get rid of the disease by treating the symptoms, but alas … Unfortunately, when the body politic seems largely asymptomatic because of a lack of overt prejudice, people think the disease is cured. But just because we’ve managed to eradicate the cross burnings and lynchings that were a plague in the South until about fifty years ago, doesn’t mean African Americans can now live their lives without the fear that their sons will be safe in the hands of law enforcement or that their daughters need not be afraid of going to a public place to hear a political speech.

So, it is surely defensible to argue that microagressions committed against black people are as psychologically damaging as the overt acts of prejudice in the long run. However, as we see from the recent confrontations between protesters and supporters at Donald Trump rallies, when prejudice is welcomed back into the public discourse, things can turn ugly quickly — now, and not just in the long run (see, for example, here, here, and here). It seems inevitable, given current tensions, that people are going to get hurt — probably sooner rather than later.

It’s important not to downplay the impact of structural racism in our society. Likewise, we should be careful not to undersell the consequences of ingrained attitudes of prejudiced people, which lead to the thousand and one indignities that African Americans regularly suffer. I want to be quick to acknowledge the subterranean rot, the systemic disease of racism, with which we still contend. In other words, just because we aren’t as likely to see overt acts of prejudice like the ones that were so common in our country prior to the 1970s, that doesn’t mean that we are anything approaching a “post-racial” society.

However, under the approving gaze of Donald Trump the recent uptick in overt prejudice and the violence it begets is distressing. When otherwise (I assume) decent folks publicly and shamelessly say things that our mothers used to wash our mouths out with soap for saying, the social fabric is under acute stress. We are experiencing a cultural drift toward a contemporary rehearsal of some of the most shameful moments in our past, when white people committed violence against black people, just because they could, and when the systematic dehumanization of folks — based on nothing more substantial than the color of their skin — was met with indifference at best, and cultural approbation worst. Somehow Donald Trump has given a significant enough number of us permission to enthusiastically play the American Hall of Shame’s greatest hits. Only this time, we seem hell-bent on also bringing Hispanics, Muslims, and refugees along to see the show.

Again, I’m happily willing to stipulate that racism was alive and well before Donald Trump showed up on the scene. Just because the N-word became not merely unfashionable but culturally offensive; and just because we sought in some small way to indemnify African Americans against the indignities they’ve suffered with programs like affirmative action; and just because we have a black President, doesn’t mean that America has prevailed against racism. But to the extent that the culture has shifted, making racists feel defensive for their racism, we have made some strides in addressing our national illness.

But unless more people actively seek some sort of intervention, I’m afraid of what a relapse might look like.

A version of this post was previously published on medium.com.

Facebook54Tweet1Pin1EmailShares56
wpDiscuz
Share this ArticleLike this article? Email it to a friend!
Email sent!