Married men: when was the last time your wife brought you flowers?

Let’s start with a song, shall we? Ahhhh….Babs:

At a dinner party on Friday, we were barely through the door when our host blurted: “My husband bought me flowers today!”
My wife looked at me, while at the same time responding to our friend’s comment: “Isn’t that nice, getting flowers from your husband.” The insinuation was clear: I do not often enough present my wife with flowers. Well, Carnation, ain’t I a boob. 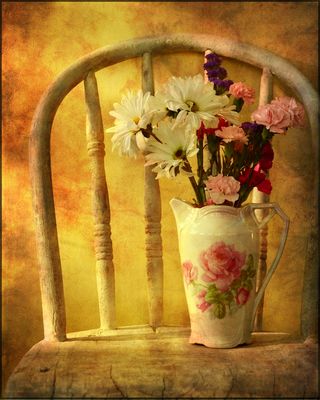 A Friend’s Antique Pitcher – by keeva999

But, there was a point I needed to make.  I immediately issued a snide, defensive apology: “Sorry, sweetie. You’re right. You easily out-do me in the flower department 3 to 1.”
“Really? Do I?” she asked, surprised.
“No!” I snapped.
With that, my defensive, immature point was made. I never receive flowers, either.

Last night she mentioned a more recent conversation among her women friends during which they all expressed dismay at the infrequency with which their husbands give them flowers.  “You’re right,”  I continued, “I don’t bring home flowers. I find other ways to show my appreciation for you: your favorite dark chocolate or mint Aero bar hiding in the fridge; an unexpected bottle of your favorite (low-tannin) wine which goes nicely with the meal I’m preparing; turning on the hot tub in the morning so it’s ready for your lovely self and the beer-ginger-ale shandy I’m carrying into the back yard for you later in the afternoon.”

Then I, as I usually do, decided to take things a step further: “What have you done for me lately?”
A bit of a yikes moment, but I still had a point to make. Her response was swift, full of bluster, and entirely justified: “I buy you your favorite bags of chips, and new clothes; I bring home all sorts of surprises for you!”

“Exactly,” I answered with deliberate calm. “which is why I never admonish you for not bringing me flowers.”

I would love to receive flowers. The fact that they are normally identified as a gift for women doesn’t bother
me at all; it’s an unjustified, sexist categorization of a lovely gesture. You don’t buy flowers for someone because they’re a woman; you buy them for someone because of the implied message. It tells the person you care about: ‘While I was going about my day today, at one point I became distracted by the thought of you. Here is my way of showing you that, amid all of life’s duties and timetables, you’re what I think of most.’

Are husbands not as worthy of that thought as wives? Of course we are. I’m sure most wives show their husbands how important they are through any number of selfless gestures: sharing a specific meal  they don’t really have a taste for, rubbing our shoulders, letting us choose a movie they think is lousy, cuddling, saying ‘I love you’, giving us a spontaneous hug. Likewise, women are on the receiving end of thousands of unspoken gestures of
love from their partners. If you’re not, your relationship has more of a need for counselling than it does for flowers.

Gestures of love present themselves in thousands of mysterious ways. A bouquet is but one. I’m one of those men who not only “Don’t Bring Me Flowers Anymore”; I almost never did in the first place. But neither did you, and I’m OK with that. I love you anyway.

I did not say it’s sex reward. Sigh… You know what, if most guys didn’t think it’s worthwhile to spoil their spouse, it’s up to them. After all, you must do it with sincerity to make it meaningful.

Why you all so serious. Huguhu…

Oh pleasee…. don’t you guys get it. Women love flowers. No matter how fast it wilted, no matter how fragile they get or how expensive they are… the value is the smile you put on their faces. Flowers in a way can do that to a woman. It lifted up their senses, make them feel happy with no reasons and when the opposites are happy, you might get your reward too 🙂

Flowers are pretty and it shows your happiness is worth the idle destruction of resources to him. An intimate gesture yet public form of Conspicuous consumption.

A reward? You mean sex which should be given without gifts anyway, and you benefit from as well?

…funny how things work out. I was about to reply to CmE’s comment by saying something along the line of :”men aren’t only mindless animals searching for sex. Then I read YOUR comment, Liz. I was just about to back you up – ‘Good for you! Don’t let these guys get you down! You deserve flowers! (So do I). But your last sentence really took some of the wind out of your sails…

I did not say it’s sex reward. Sigh… You know what, if most guys didn’t think it’s worthwhile to spoil their spouse, it’s up to them. After all, you must do it with sincerity to make it meaningful.

May as well leave the flowers in the ground, in terms of how much my wife or I appreciate them as a gift from each other. I like how you address the double standard though

Me personally I think giving flowers are a waste of money and flowers. They die in a few weeks and then you have a handful of wilted leaves that have to be tossed out. Seriously if a woman is thinking of buying me flowers I hope she doesn’t do it. I’d rather she take that money and buy something that will last a lot longer than a few weeks or at least if it is some sort of perishable it provides something more than just being something pretty to look at before it perishes. Usually when it comes to sending… Read more »

Problem for me is as a SAHD, I do the things on both lists, traditional Male ones and the traditional homemaker ones…….The problem has come up as in what the heck can she do for me……she’s having a hard time figuring that out.

What most SAHMs like best is time away from being a SAHM. Spa? Dinner with friends? A weekend away? Tickets to a concert or sporting event? What would SHE like if she were in your shoes?

The problem is that many of those things tend to be gendered, and lets be honest, Women as a group tend to do a better job taking care of themselves/their wants and needs than men do. I was always supposed to keep up with her interests and be able to find gifts / dodads / recreatioal activities that suited her. She like many women never managed to do the same with my tastes / hobbies / recreational interests. I’m tired of being the logistics handler in the relationship…… suggesting we get away is very different than planning/financing/setting up childcare coverage.

My birthday is next week and guess what my girlfriend got me for my birthday?

Crock pots are awesome; throw in some chicken piece, a jar of salsa and some baby potatoes in the morning, and voila!…dinner is ready by 5.

Don’t you dare waste money on flowers with me. Buying me new powertools though, or supplies I need and I’ll love you dearly.

I actually sent my ex partner flowers to surprise him a number of times while we were living apart. He actually was more fond of flowers than I am (receiving them just seems far too cliche for me), so he appreciated the gesture, and it meant more to him to receive them than it would for someone to buy them for me.

Well, if you are living apart and thus not able to do the small everydaythings for each other, then I think it’s not really the same thing.