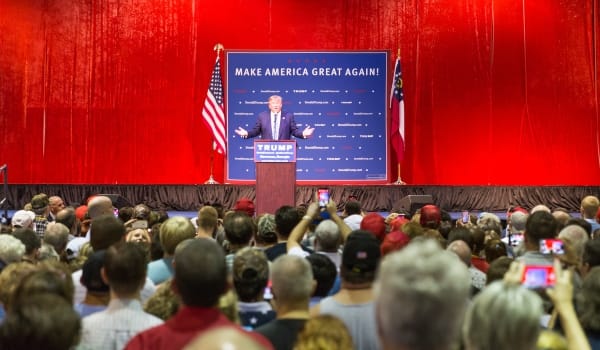 —
We’ve been given lots of reasons people support Trump, like authoritarian attitudes and “the legitimate anger that many Americans feel about the course that the country has taken.” But it’s also racism, I’m pretty sure. Or at least racists.

It’s hard to measure racism – or even define exactly what we mean by racism. One way to approach it is racial salience, which is closely related to racism, and we can measure that with the proportion of the local population that is Black. (I reviewed a bunch of this research here.)

It’s also usually hard to get measures of just White behavior, which makes a Southern Republican primary perfect — they’re basically all White. This is also good because we’re trying to figure out what’s driving the Trump thing. In South Carolina, it looks like it was driven by the presence of Blacks and people born in South Carolina, and less urban populations.

In counties with less than 40% of the population born out of South Carolina — 33 of the 46 countries — there is a strong positive relationship between Trump vote share and population proportion Black. Here is the plot, with the high local-born counties in red:

Those red dots are the classic percent-Black racism pattern. Whites are more racist where there are more Blacks. Interesting in the case of Trump, because most of his overt racism is directed at immigrants and Muslims. But the regular anti-Black racists have been very apparent in his crowds, and in his endorsements.

I looked at the out-of-state share because of the outliers. That’s Horry County in the top left (site of Myrtle Beach) and Richland County at the bottom right (site of Columbia), two places with less of an old-school (i.e., rural slave plantation) feel. The rural thing is important, too, as larger counties voted less for Trump.

I’d love to see someone do this for the Super Tuesday states. The other variables you could use would be slave populations in 1850, or post-bellum lynchings.

Here it is in regression terms, with the 46 counties (ask me for the data and code):

This is just a descriptive analysis. And I probably only presented it because it fits so well with my prior assumptions – so that’s good or bad on my part, I guess. That said, I did it and posted it so I own it.

Someone on Facebook objected that I am obscuring the positive slope in the high out-of-state counties. In fact, if you exclude Horry County, you see a positive slope in those counties as well. As you would if you included all the counties together. That black line is not good because it’s so skewed by the outlier. However, the regression didn’t use the categorical breakdown of out-of-state population. There you can see the positive effect of proportion Black in all counties, but at high levels of out-of-state the model says proportion Black would turn negative – which is because of the Horry County outlier.

In fact, if you just drop Horry County, the interaction and out-of-state effects are no longer significant, it’s just proportion Black and population size! So, you could rephrase the conclusion as: more Trump votes where there is more Black population, and in smaller-population counties, and ignore the out-of-state thing. But I don’t know enough about South Carolina to know whether it’s justifiable to exclude Horry County that way. It’s one of the most populous counties (6% of the total).

Here is the chart with all the counties, dropping the out-of-state distinction. Still a nice positive relationship and a good racism story, but weaker:

And just to show how extreme the effect of the outlier is, here are just the high out-of-state counties, with and without Horry: 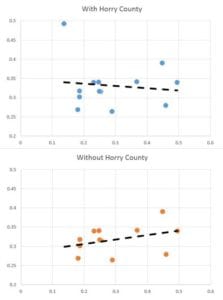 This post was previously published on familyinequality.wordpress.com and is republished here under a Creative Commons license.