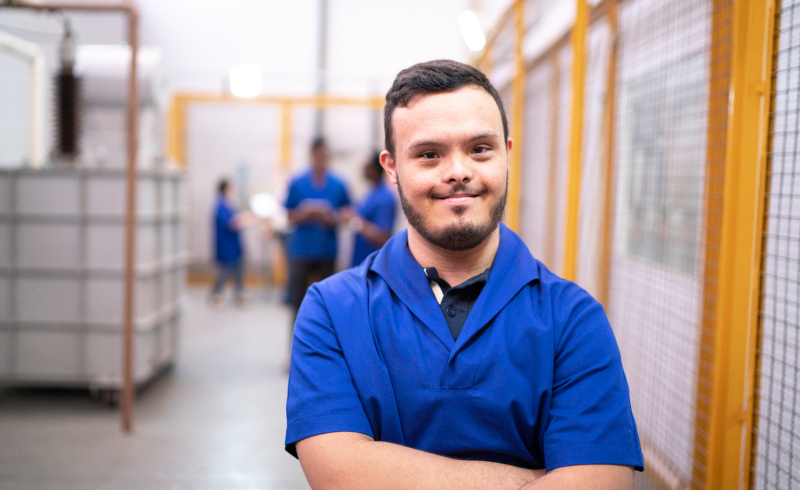 When Trevor Hutchinson first started working in manufacturing at the Procter & Gamble Company, he reserved the earlier part of his day for standing and walking around on the production floor and his afternoons for meetings and conferences, to minimize time on his feet.

But within the last decade it’s been harder for Hutchinson, now a supply chain leader, to get around. He uses a wheelchair more often. Hutchinson has hereditary spastic paraparesis, a progressive disorder that stiffens and weakens his legs and prevents him from walking long distances.

“When you can’t make it to your car at the end of the day three out of four weeks and you’re falling in the parking lot, that’s when you realize you’ve got to do something,” Hutchinson says.

Hutchinson asked his employer — the largest consumer goods corporation in the United States — if he could take a shift that lets him work at the office in the morning, when it’s easier for him to get around, and from home in the afternoon. He also asked the company to provide him with a home computer, so he doesn’t have to carry a heavy laptop bag home. P&G accommodated both of his requests.

The Americans with Disabilities Act (ADA) of 1990 empowers Hutchinson to ask for these accommodations. The primary protection of the law is nondiscrimination. Employers with 15 or more employees are prohibited from discriminating against individuals over a disability, says John Annand, board member of the Washington metropolitan area chapter of Disability:IN, a national organization promoting inclusion of people with disabilities in the workforce.

The ADA, which become law on July 26, 1990, represented a watershed moment not only because it’s broadly applicable, but also because it helped employers see individuals with disabilities as simply individuals, Annand says. The law contradicts the idea that a worker who needs a reasonable accommodation to do a job is getting special treatment, according to Annand. “The best employers know the ADA is just a starting point for building a truly inclusive workforce,” he says.

In addition to working as a supply chain leader, Hutchinson is also leader of the company’s North America People with Disabilities Affinity Team/Employee Resource Group. The group, in part, helps ensure that employees with disabilities have the tools they need to succeed.

“Individuals with disabilities, because of the way they’ve had to adapt in different cases, also generate some awesome strengths,” Hutchinson says.

U.S. employers such as P&G know that people with disabilities develop strengths to meet the challenges they face. Companies have found that these same strengths spur product innovations and insights that can improve business processes. Accommodating people with disabilities may help their career success, and it also enhances product lines and creates workplaces that provide a better experience for all employees.