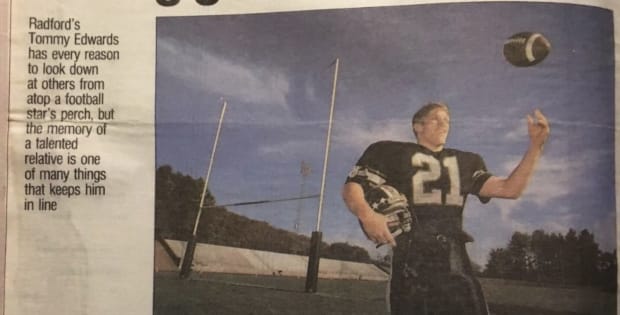 Tommy Edwards is bipolar and suffers from advanced symptoms of CTE, Chronic Traumatic Encephalopathy. I advocate for healthy brains and athletes’ safety through the GMP Disposability of Men SIG. It is such a waste to lose our loved ones to the ravages of CTE — including suicide, ALS, dementia, and self-destructive behavior fueled by pain, alcohol and drugs. Tommy’s story is important because it is a glimpse into the causes and effects of brain damage. It is a warning to all to allow their loved ones to play the game.

The first time I met Tommy Edwards on Twitter, he posted a cry for help. His symptoms at that moment were unbearable. These symptoms of CTE include memory loss, confusion, impaired judgment, impulse control problems, aggression, depression, anxiety, suicidality, parkinsonism, and, eventually, progressive dementia. These symptoms often begin years or even decades after the last brain trauma or end of active athletic involvement. Note: They may manifest differently in every person.

After a few conversations, Tommy came to our GMP call on “The Disposabiity of Men,” in which we focused on CTE. Everyone on that call felt his pain. Since then, Tommy has written a five-part series on his journey to his height as Touchdown Tommy and low to living in his vehicle.

As reported by Jon Kelly in a Washington Post article, Tommy Edwards was a standout athlete at Radford High School in southwest Virginia, where a local sportswriter bestowed the nickname Touchdown Tommy. In 1992, Tommy set scoring records as a running back at Virginia Tech before transferring to Boise State in 1995. There were those who said he was destined for the NFL. He didn’t go that route. He returned to his first love and became a professional skateboarder and starting a skateboard company in California. It fell apart. His diagnosis: bipolar disorder.

When he heard about the Virginia Tech massacre in 2007, he said, “… I felt the need to … do something to help… [because]…[mental health issues are] something I live with every day, something I manage.” So, he moved home and started the Heart of Virginia Foundation, a nonprofit that works to destigmatize mental illness and encourage an increase in mental health services in the commonwealth.

In this series, Tommy Edwards will be posing [and answering] the question, what caused an All American Football Star, Mental Health Advocate, and Hometown Hero from the Blue Ridge Mountains of VA, to become the target of civil rights violations, hate crimes, and a New Jersey SWAT team who was told to act by the current magistrate, the former high school coach, and current Police Chief, the magistrate’s wife? They said he was armed, mentally ill, homicidal, and headed for a school, 10 days after the Parkland High school Shootings in Florida — willful blindness/ignorance of football, CTE, and fear of change!

The Goodmen Project is committed to encourage and support mentally and emotionally healthy men and society. In articles and convocast discussions, strong solid relationships and sense of community are the best defenses against depression and suicide.

I have the privilege of being his editor. I have endeavored to maintain his authentic voice, fixing only sentence structure for readability and clarity.

While Tommy’s story may not be unusual, his passion is. He understands and freely discusses the societal and family pressures that pushed him into football. He analyzes the circumstances that manipulated his decisions. He explores his addictions and self-medications.

The most important thing to take from his account is that he is neither unique nor alone. He speaks for hundreds, if not thousands, of players who have had a similar experience and after-effects.

The scariest thing is how many of this country’s current tackle football players will be going through the same end-game – with no support from sponsors or owners for their current and long-term health care, financial impoverishment, or family stress.

Commoditization: use them, abuse them, and forget them. Why? Contact sports are the opiate of the oppressed stressed workers – keep them happy on their days off by watching players destroy themselves for entertainment — and a gold mine for the owners.

Brain Damage is real. It diminishes, if not outright destroys, any hope of a quality life after the game is over, including relationships, family, careers, and suicide. When considering a contact sport, choose wisely – you only get one brain. Keep it healthy.

Facebook146Tweet15Pin1Email1Shares163
wpDiscuz
Share this ArticleLike this article? Email it to a friend!
Email sent!