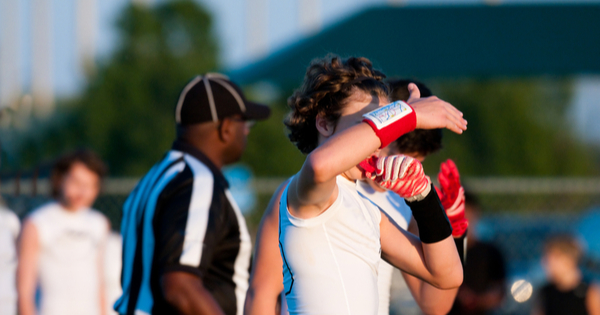 Dear Athletic Support: This is my son’s first year of high school football. He’s really enjoying it, but I can’t help worrying about the heat. The coaches have been having him weigh in before and after practice, but some days he still loses close to ten pounds. What can we do to beat the heat? — Trying To Stay Cool In Tennessee

Dear Tennessee: In regards to football safety, CTE and concussions seem to steal the headlines these days. But the truth of the matter, especially this time of year, is that there is no denying the dangers of heat.

With heat indexes topping out around a hundred on a daily basis in Arkansas, I’m guessing y’all are in the same boat over in Tennessee. Strap another twenty pounds in pads, and your son is going to lose some weight. There’s just no getting around it.

By weighing him before and after practice, your son’s coaches are following proper procedures. They should also be adhering to all of your state’s other heat guidelines. In Arkansas coaches are required to have cooling stations set up around the practice field and allow for mandatory water breaks.

The most important thing your son can do is drink water. Gallons of it. He needs to consume at least 24 ounces of fluid for every pound lost.

One of the easiest ways to measure hydration levels is by urine color. If you see something in the toilet that looks like apple juice, your son is in trouble. His pee-pee needs to be crystal clear.

Dear Athletic Support: A month or so ago, right in the middle of July, my grandson’s ten-year-old baseball team squared off against a travel team. We were demolished, and it got me thinking: It’s not fair for these travel teams to snatch up all the best players then have the gall to play the average teams and make them look terrible. I’ve seen how this plays out. The more talented athletes become so special in high school they don’t have to go by the rules the other kids do. Separating them out at a younger age makes it even worse. Your thoughts, please. — Hot and Bothered

Dear Hot and Bothered: I’m going to be gut-level honest with you — I was one of those “special” kids.

Things were a little different back when I was playing youth baseball. At the end of each season an “All Star” team was chosen. I’m not really sure what the selection process consisted of, but every year I made the team.

We never played the local teams, though. We traveled to tournaments where we competed against other “selected” teams. But the message was still clear: we were the “All Stars.”

In regards to your assertion that this sort of “superiority” extends on into high school, you’re exactly right. I reaped the benefits of being an athlete all the way through my education.

All athletes’ playing days must come to an end, however. And for many of these once-heralded young competitors, the transition from superstar to civilian is a rough one. The past-his-prime jock, stumbling up the stands on a Friday night, aimlessly searching for the fame he once knew — it’s a hard image to swallow, because it’s true.

So, as long as your grandson can withstand a few more poundings at the hands of his travel-league peers, (which, by the way, I don’t think is fair; they should definitely compete in different leagues) he’ll eventually come out of this unfortunate situation on top. The “All Stars’” days are numbered.
—