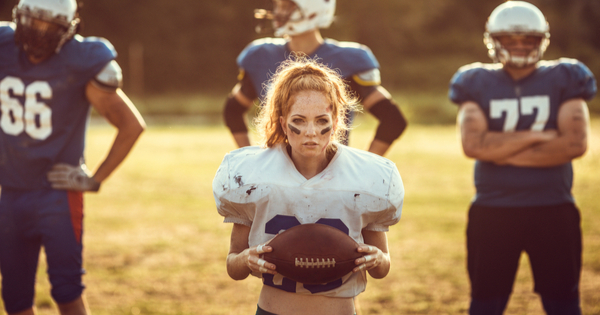 Dear Athletic Support: My daughter has recently expressed interest in joining the high school football team. At first, I was shocked; I couldn’t even imagine how it would work. The more I’ve thought about it, though, the more I’ve started second-guessing myself. I mean, this is America, right? Land of the free, home of the brave. If my daughter wants to play, why can’t she? Your thoughts, please. — Proud Dad

Dear Proud: If my daughter wanted to join the high school football team, I’d want to explain a few things to her before she made her final decision.

First, there’s the issue of the locker room. As a girl on an all-boy team, your daughter—or mine—would constantly be subjected to exile. This, of course, would be for her own good. There’s simply no way to mix boys and girls in a locker room without trouble.

The next thing for any girl wanting to play football to consider is the physicality of the game. When tackling or blocking, or even spotting a teammate during a workout, it’s almost impossible to avoid touching places that would be considered off-limits if that person happened to be a female.

During my tenure as a head high school football coach, I actually held a meeting with a girl who was interested in joining my team. The girl’s mother was sitting right beside her as I explained all the parts on her daughter’s body that could get touched if she decided to play.

It was cringe-worthy, to say the least, and in the end, the girl decided football wasn’t for her. But what about your daughter? What about mine?

I’m more of a dad now than a coach, so my perspective has definitely changed. I’m no longer thinking of what’s best for the team, but instead, what’s best for Emmy Lynn Cranor.

It would be hard to look Em in the eyes and tell her she couldn’t play ball with the boys, especially if that’s what she really wanted to do. In fact, there’s a huge part of my heart that would be proud. While prepping for this column, I did a little research and found girls on football teams across the country, already out there, paving the way.

In 2019, Toni Harris signed a National Letter of Intent to play college football for Central Methodist University, becoming the first female position player to ever receive a college football scholarship. Toni had this to say about her career during an interview with CNN: “I told myself no one’s ever going to decide what I am going to do with my life. That’s my decision.”

After hearing Toni’s story, it’s hard for me to imagine holding my daughter back in any way. Then again, it’s the job of a father to protect his child, especially when she’s too young to make a reasonable decision on her own.

For me, the hardest part of being a parent—or a coach—is determining when to put my foot down and when to take a step back. But if all the factors involved in this decision have been thoroughly explained to your daughter, it might be time to take a step back and let her make this call on her own.