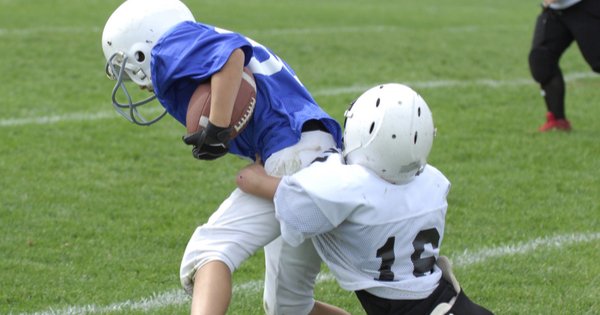 Dear Athletic Support: I held my 10-year-old son out of tackle football this year, and he’s not very happy with me. Most all his other friends are playing, but I just couldn’t stomach it. My son doesn’t even weigh 70 pounds. He’s barely 4 feet tall. Some of his friends are almost twice his size! I put him in flag football for this season, but he says it’s not the same. Is there a proper age for boys to start full-tackle football? — Lame Mom

Dear Lame Mom: First off, you’re not lame; you’re just cautious, and there’s absolutely nothing wrong with that.

You’re also not alone. Donald Trump, Mike Ditka, Justin Timberlake and Bo Jackson (among many others) have all stated that they would not be comfortable with their sons playing football.

In his 2018 documentary “Shocked: The Hidden Factor in the Sports and Concussion Crisis,” hall of fame quarterback Brett Favre went on record as saying, “I cringe when I see a fragile little boy get tackled and the people ooh and ahh because they just don’t know. Or they don’t care. It’s just so scary.”

This is coming from the man who holds the record for most consecutive NFL starts (297). I grew up idolizing Favre, modeling my game after his tough style of play. These days, though, things are different.

With everything we now know about concussions and the potential risks of tackle football, modern parents must consider many factors regarding when (or if) their sons should start playing America’s favorite game.

Archie Manning, another Hall of Fame NFL quarterback, held his boys (Peyton and Eli) out of football until they were old enough to play for the school. I think Archie was onto something.

The problem with peewee leagues is oftentimes the coach. This isn’t always the case, but more often than not, peewee football coaches aren’t properly trained. This can lead to young athletes learning poor technique that could potentially put them in danger in the future.

Now, some parents might argue that holding a boy out of organized football might hinder his chances to excel in the sport later in life. Let me remind you of Peyton and Eli Manning; their “late” starts didn’t keep them from reaching the pinnacle of the NFL.

I will confess here that I strapped on my first helmet at the ripe age of 9. I partook in “Bloody Alley” and “Bull In the Ring,” two tackling drills that have now been banned from organized football in most states. I was even awarded the “Hardest Hitter Award” in fourth grade. I still have the trophy.

Despite my affinity for a solid tackle, this topic has recently become very personal to the Cranor family. A few weeks back, my wife gave birth to our first son. This question of when/if to start him in football is something I’ve been anticipating for months, and let me be clear: there is no simple answer.

Football taught me discipline and toughness in ways I could’ve never learned in a classroom or an air-conditioned gym. It provided me with an education, a chance to play professionally and journey to parts of the world I would’ve never seen otherwise.

There is no doubt, though, that my successes have come at a cost. What price will I have to pay for those early years spent going head to head in “Bloody Alley?” What price will your son have to pay if you decide to let him play? That, I’m afraid, is a question only you can answer.