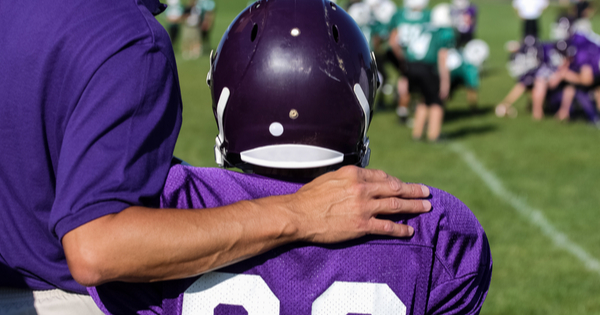 Dear Athletic Support: My 11-year-old son isn’t doing what he’s supposed to at home. I can’t get him to do his chores. I can’t get him off his videogames. I feel like I’m losing control. The only activity he really seems to like (besides videogames) is football. I’m thinking about taking him out of football, or at least threatening it, if he doesn’t straighten up at home. Is this a good idea? — Desperate Single Mom

Dear Single Mom: I would strongly advise against taking your son out of football as a last-ditch disciplinary action.

Your son made a commitment to his teammates and coaches. I don’t know what his role is on the team, but every player on the roster matters. If your son were forced to quit, the team would not be the same.

Instead of removing him from the team, you might want to give his coach a call. Tell him about the situation at home and see if he has any ideas about how to help motivate your young man.

Be sure to do this carefully. A coach, undoubtedly, becomes a role model to his players. A good coach teaches much more than just football. However, a coach’s role, in many cases, is confined to the field.

In other words, a coach simply cannot police every one of his players’ personal and academic lives, all while trying to maintain the discipline required to effectively manage a football team.

But if you come to this coach — and ask him in a way that doesn’t sound like you want him to “parent” for you — then he just might be willing to lend a helping hand.

A coach can “help” in ways a teacher, or even a parent, cannot. In a day where spanking and other forms of corporal punishment have been mostly removed from public schools, a coach’s threats still carry considerable weight.

To put it bluntly, coaches have the unique ability to inflict physical pain on young men.

A coach has a wide array of different punishments at his disposal. So, before you decide to remove your son from football, maybe it would be worth your time to give his coach a call.

Dear Athletic Support: My son’s coaches are encouraging him to limit himself to one sport in high school. They say it will give him a better chance to earn a college scholarship. Are these coaches just being selfish, or is there any proof that single sport high school athletes have a better chance? — Distrustful Dad

Dear Distrustful: I’ve touched on the issue of “specialization” in a few of my previous columns. You can do a quick Google search and find the truth about this unfortunate trend — it’s bogus. There is no correlation between specialization and scholarships.

However, your question about “selfish” coaches is new.

At their core, I’d say most all coaches are selfish to an extent. I know I was. After all, coaches’ jobs are mostly dependent upon wins and losses.

This sort of cutthroat competition probably isn’t healthy, but it’s just the way things are.

So, yes, I’d say any coach that advises your son to specialize in one sport with the promise of earning a scholarship is acting selfishly. But then again, a coach has to be somewhat selfish… if he wants to win.

Photo: Sign up for our Writing Prompts email to receive writing inspiration in your inbox twice per week.