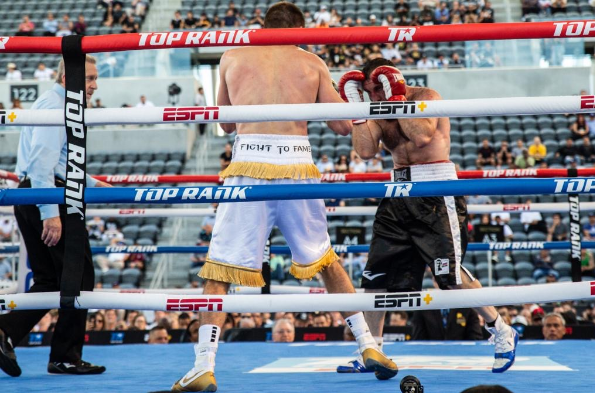 Hollywood action stardom has long been dominated by gymnasts, bodybuilders, and pro athletes – everyone but fighters. New blockchain-powered entertainment platform, Fight to Fame, will give fighters the opportunity to break through and become the next Jason Statham or Dwayne “The Rock” Johnson.

FIGHTING FOR THE SPOTLIGHT

Fighters don’t often become action stars, and Fight to Fame wants to see that change. International registration means fighters ignored by major martial arts promotion companies will have the same opportunity as their peers. Up and coming fighters from around the world will take part in preliminary rounds to see which of them will move onto the skill challenge rounds.

Major industry mentors will work with the fighters, training them for all aspects of action stardom. By bringing in action stars, directors, world champions, trainers, etc., the fighters will get real-world experience and knowledge from the people who know and work in the business.

A TEST OF SKILLS

Each week, there will be a new skill to learn; stage punching, stunt work, endurance/fitness training, marketing/media training, and acting training, and weekly challenges to test their new skills. The final round will be an extreme test of what the fighters learned throughout the competition, with winners receiving Championship Gold Belts, and the opportunity to become Hollywood’s newest action star.

All fighters, regardless of whether they win or lose, will benefit from their time on the show. The global spotlight offered by Fight to Fame will help fighters build fanbases, get sponsors, and generally boost their careers.

The first-of-its-kind platform created a unique BMS (blockchain+movie+sports) business model that benefits all of its stakeholders. As Chris van Heerden, one of the platform’s ambassadors, says, “Fight to Fame hopes to break this monopoly [of global martial arts promotion companies] by building an ecosystem that will provide all stakeholders – including fighters, stars, fans, and advertisers with the tools and incentives for deeper interaction and engagement.”

Viewers will be able to watch shows and events on the platform by using their cryptocurrency tokens. The new cryptocurrency system gives everyone involved, whether they’re watching at home, or helping make the show happen, the ability to engage with the platform in new ways.

The groundbreaking new entertainment platform, Fight to Fame, changes how fans engage with the show. Fighters will get the chance to jump-start their careers and become famous on an international level, regardless of success in the show’s format. Winners of the competition will gain recognition in their field, along with the ultimate prize: a chance to become the next big action star.

This content is brought to you by Fight to Fame.