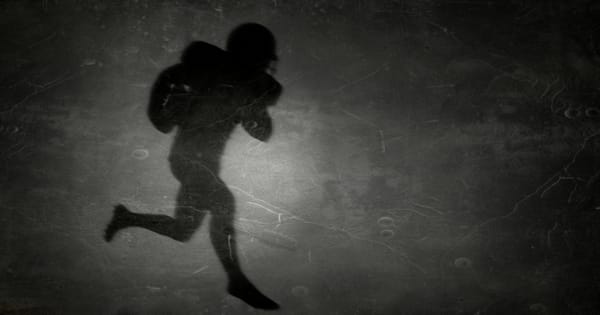 On the eve of the FBS National Championship, I think it’s high time we talk about secrets. I’m currently working on a novel about college football, specifically the recruiting side of the game. As I went about my research, I kept encountering a term I was unfamiliar with:

No, I’m not talking about the Mafia here, or politicians paying off strippers. I’m talking about football, and the secret world of recruiting, the kind that doesn’t involve coaches, at least if they play it cool.

In his SB Nation feature, “Meet the Bag Man,” Steven Godfrey defines Bag Men like this: “These guys are fans who believe they’re leveraging football success $500 or $50,000 at a time.” Godfrey goes on to explain how Bag Men work, paying off high-profile recruits in cash, trying to convince them to come and play for their school of choice.

Let me pause here and concede that there is no proof. Not really. Sure, Hugh Freeze got fired as Ole Miss’s head coach a few years back for some sort of recruiting shenanigans, but these big-time guys are like politicians — they know when to get out.

But if we were to stop and really think about it, the function of the Bag Man at the highest levels of college football kind of makes sense.

With millions of dollars being dished out to head coaches, all the pageantry and the pride, the nationally televised rivalry games, the traditions, the bookoos of money — is it really that hard to believe somebody out there isn’t paying the players?

In his SB Nation piece, Godfrey describes how these guys work independently of the university. Like I said earlier, if the head coach is smart, he doesn’t get involved. Instead, these Bag Men operate like lone wolves, targeting only the highest-rated recruits — many of which are struggling to survive at or below the poverty line — and go about courting them with bags of cash, used cars, hot meals, the essentials.

A recurring question in college football of late has been whether or not athletes should get paid. Any experienced coach or astute fan knows that players win games. So, would the biggest determining factor for future wins really go unaccounted for by the multi-million dollar industry that is the NCAA?

It makes you think.

Especially when a 2-10 team like the Razorbacks hauls in a recruiting class like the one they’re on their way to amassing for 2019.

I was at a family function over the holidays, the Razorbacks’ recruiting class was brought up, and invariably, somebody asked me, “Dang, Eli, how do you think we got all those studs to come play for us after such a bad season?”

I didn’t give an answer, because I don’t know how the Razorbacks landed so many top-ranking recruits, but I’d be willing to bet they weren’t coming for a shot at a National Championship.

Bama and Clemson, the two teams playing Monday night in the title game, they can offer prestige. They can talk about tradition and show off their trophies, but I bet they have their Bag Men, too.

Again, I don’t know any of this to be factual. In my five years playing college football I never once saw a single bag of money. Never heard a teammate talk about meeting some chubby banker in a Waffle House parking lot. It all could be pure speculation.

But then again, this is America we’re talking about. The land of the free market. Capitalism at its finest. And football is America’s game, baby. There is nothing we love more than winning, no matter the costs.

Or maybe the Bag Men are a fairytale, something the naysayers have dreamed up to rain on the parade that is college football (FAKE NEWS!).

Either way, it makes for a great story, a fantastic yarn of greed and corruption, tainting the simplicity of a beautiful game. The great American novel, if you will. Or at least that’s what I hope, because that’s the book I’m working on now.

Facebook3Tweet2Pin1EmailShares6
wpDiscuz
Share this ArticleLike this article? Email it to a friend!
Email sent!