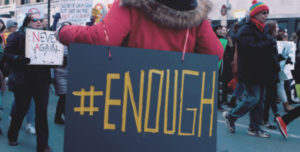 I read an August 10, 2018, ESPN article: The Inside Story of a Toxic Culture at Maryland Football by Heather Dinich, Adam Rittenberg, and Tom VanHaaren. This story is an investigative look at the causes for the death of player Jordan McNair, who collapsed on the field during practice and died in the hospital. No one reported McNair’s medical condition for one hour, after which the coaches called an ambulance.

Winning is the only thing
When I finished, I was struck by the tactics used by the coaches to create a tough, manly team. At this point, I admit I’m not a fan of contact sports. The brain damage and lack of support for players and retired players says that sponsors, promoters, owners, schools, fans, and the rest of the industries that support these games are only in it for the money. The players are disposable and replaceable.

The making of “real men”
While the information in the article is about one college team, I suspect the coaching style occurs way more often, at a variety of levels from the subtle to flagrant, than we the public and the players’ parents suspect. The amazing part of this awakening is that it still goes on and the behaviors are tolerated. Why? Contact sports makes “men” out of boys and girls. Teaches them teamwork, spirit, work ethic, assertiveness, competitiveness, competition, winning, and how to follow orders – at any cost. Bodies, brains, and emotional intelligence get sacrificed in the attempt.

Connecting the dots
Although I am prone to connecting the dots among all the ills plaguing this country, this piece brought me up short. The inside look at the toxic sports culture brought me to an ah-ha moment. In the instant I completed reading the list of coaching behaviors itemized by the players, I saw the same behaviors we see in the world of politics. The same behaviors this country must address if we are to change our future – for ourselves, our children, and our children’s children.

Clarify terms
Our primary directive is to rid this country’s obsession with unbridled greed and power as tools to measure success. The go-to behaviors to support these obsessions are defined as follows:

Reported football coaching and administrative behaviors at University of Maryland

Political game plan mirrors sportsThe top 2% monied class, as the coaching staff above, have subjected us, the 98%, to slow and steady manipulation, abuse, and bullying to normalize divisive behaviors such as sexism, racism, and white supremacy. We are encouraged to turn a blind eye to the “violence,” turn a deaf ear to the “victims”, silence the “truth to power speakers,” to support the abusers and bullies. And, as in sports, our institutions will not save us, having been undermined by payoffs and perks.

Normalizing numbs — change breaks the cycle
Football players cease to hear or react to the coaches’ abuse. They quickly learn there is no place to turn. It becomes a way of life. They must grin and bear it to be on the team and play the game. Those who rebel are kicked off, disgraced, and labeled failures. If we don’t want our children abused and bullied for the sake of a game, we have to stand up for their safety: body, brains, and self-confidence. This will take hard choices that challenge our belief system.

Commoditization Rules
This is scenario can be said of American voters. Through a lack of attention, we are now sucked into an agenda that hurts the 98%. What if this agenda had been clear from the outset? What if we had listened? Would we have supported it anyway? Many years of increasing wealth and a comfortable middle class lulled us into complacency. It is only now that the true agenda has emerged as the middle class is disappearing into the working poor.  A few examples:

Changing the culture
We, the people, must open our eyes and fight for a government that is responsive to the needs of all its citizens. We must demand that all who have prospered on the backs of others should the responsibility for making sure that all have access, regardless of income, to the rights and services that protect them. There is no reason why anyone in this country need be homeless or hungry. We do not have surpluses of food or housing, we have un-monetized stored resources. This is unacceptable.

While the planet will survive, the inhabitants may not
If there is to be a country or a world that supports human life, our resources must be saved, replenished, and renewable. When our current agricultural processes are decimated by heat, when our land surfaces are destroyed by earthquakes, mudslides, and fire; when our seas are super-heated killing marine life and generating massive destructive hurricanes;  and when the polar ice caps melt and rising water levels change the world’s topography, then what? Will it be too late?

If we don’t find a way to deal with the massive changes to the world’s surface, 200 million homeless will overtake the land that is left. “Mine” will be a word of the past. “Ours” is the future. It is this future that must be embraced now. Our thinking and our decisions are not only about today, they impact our future. Short-sightedness will be our downfall.

Change the rhetoric, change the future
To change, we must model our beliefs by example: remove the bullies and abusers from our own lives. Our voices and actions are the only hope this country has for a future that is “ours” for now and the future. We need to concentrate on encouraging solutions for immigration, sustainability, and climate reality if there is to be any future at all.

HOW?
Support candidates that share your vision: write postcards, canvas, call, donate, and/or attend rallies. More than ever, if we are to defeat abuse and bullying, we must take action. This means paying attention to local, county, and state elections. Know the candidates, do the research, follow reliable news sources, and recognize opinion as just that.

#VOTE2018!
If you’ve voted every election, or voted every four years, or never ever voted, this is the year you must vote. No vote is cancelled out by a spouse or a friend. No vote is insignificant. Every vote adds to the voice of the people. Every vote says, I CARE. The overall vote count says, that we as a country believe the life of every American citizen counts. Make a planto vote – write in or at the polls – today. Make a date with a voting buddy. Better yet, carpool to vote. Do it.

RSVP for Weekly Calls on The Disposability of Men & CTE

1. Free access to any ONE Social Interest Groups. Try them out! We have active communities of like-minded individuals working to change the world on important issues. Weekly facilitated calls that lead to the execution of real-world strategies for change. Complete schedule here, with new ones starting all the time.
2. Free access to any ONE of our live classes. Each month, we have the following: Learn how to be a Rising Star in media, build your own platform, become an advanced writer, become an editor or create social change. Check out our classes here. RSVP for any one class—if you want to take more, just upgrade to an Annual Platinum Membership.
3. Invitation to the MEMBER-ONLY Good Men Project Community on Facebook and all Weekly Friday Conference calls with the Publisher and community. Connect with other members online and by phone!
4. An ad-free experience. No banner, pop-up, or video ads when you are logged in.
5. GOLD commenting badge. Only members can comment on the website!

“Here’s the thing about The Good Men Project. We are trying to create big, sweeping, societal changes—–overturn stereotypes, eliminate racism, sexism, homophobia, be a positive force for good for things like education reform and the environment. And we’re also giving individuals the tools they need to make individual changes—-with their own relationships, with the way they parent, with their ability to be more conscious, more mindful, and more insightful. For some people, that could get overwhelming. But for those of us here at The Good Men Project, it is not overwhelming. It is simply something we do—–every day. We do it with teamwork, with compassion, with an understanding of systems and how they work, and with shared insights from a diversity of viewpoints.” —– Lisa Hickey, Publisher of The Good Men Project and CEO of Good Men Media Inc.

Photo by Rux Centea on Unsplash