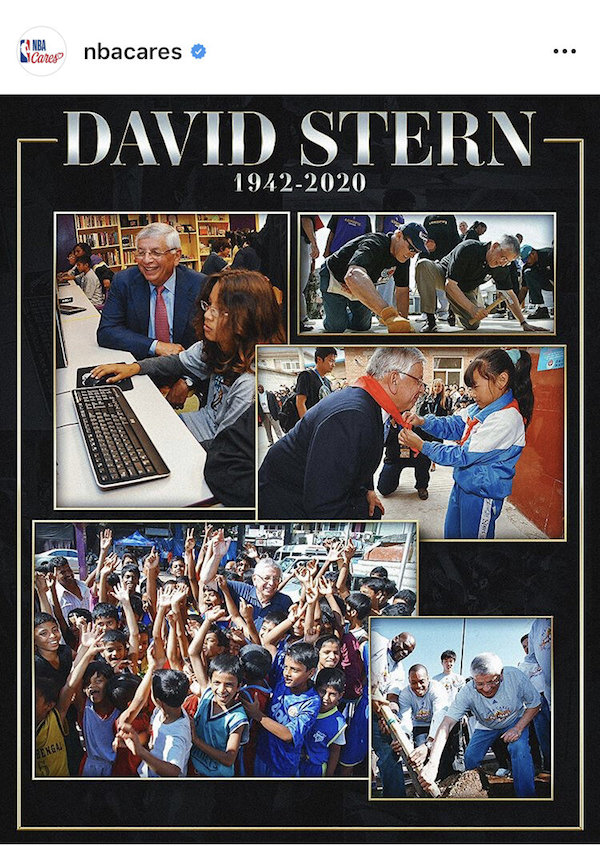 The NBA announced the passing of former league commissioner David Stern on New Year’s Day due to complications from a brain hemorrhage he suffered last month. While NBA executives and players mourned the passing of Stern, the NBA community will remember him as one of the league’s most successful business leaders. Stern transformed the NBA into a multibillion-dollar global industry, saving it from financial hardship and leading efforts to increase the league’s popularity worldwide.

A Naismith Basketball Hall of Fame member and the league’s longest-serving commissioner for 30 years until 2014, Stern developed marketing and public relations strategies that successfully helped the league increase revenue and boost the NBA’s global audience. At the same time, he also encouraged teams and players to engage in charitable activities as part of the league’s social responsibility efforts.

In 2005, Stern helped establish NBA Cares, the league’s philanthropic arm that addresses social issues around the globe and promotes community outreach initiatives that support education, youth and family development, and health and wellness. Since the program’s launch, NBA teams and players have contributed more than $220 million to a wide range of causes.

“David took over the NBA in 1984 with the league at a crossroads. But over the course of 30 years as commissioner, he ushered in the modern global NBA,” current NBA Commissioner Adam Sliver said. “He launched groundbreaking media and marketing partnerships, digital assets and social responsibility programs that have brought the game to billions of people around the world.”

A social justice advocate who turned challenges into opportunities for the league’s success, Stern received the 2017 Medal for Excellence Award from his alma mater Columbia Law School for his work to lead social responsibility and community building efforts. In addition, the Dianne and David Stern Foundation donated approximately $2.1 million last year to Jewish causes, such as Scarsdale Synagogue, Westchester Jewish Community Center and the Anti-Defamation League.

To honor Stern, NBA players and referees will wear commemorative black bands on their jerseys for the rest of the 2019-20 season.

Originally published on Sport of Philanthropy

About Champions of Philanthropy

The Sport of Philanthropy is a blog created by social enterprise Champions for Philanthropy to highlight the charitable work of professional athletes, teams and major sports leagues in the U.S. and around the world. Our goal is to showcase best practices in sports philanthropy by sharing the powerful ways that athletes are leveraging their influential platforms to generate positive impact outside the game.

Through blog articles, social media feeds, interviews and other content, we celebrate inspiring philanthropic efforts in professional sports that rarely make the highlight reel. In our exclusive interviews, we talk with current and retired athletes, agents and teams about the causes nearest and dearest to them and how they are effecting change in communities across the globe.

To learn more about Champions for Philanthropy, visit www.championsforphilanthropy.org.