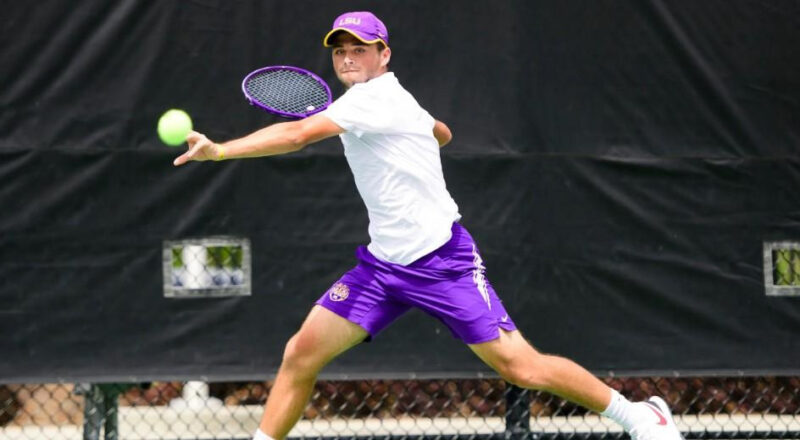 Hours before the March 20th men’s final at Indian Wells, the biggest and toniest of tennis tournaments outside of the four Grand Slams, Ronald Hohmann was seen limping out of a warm up. He was on deck to play Rafael Nadal, the venerated Spaniard and perennial favorite, unbeaten for the year and two months off his historic 21st Grand Slam singles title. In the semis the day before, Hohmann had tweaked his ankle during the match against world number 7 Andrey Rublev. What began as discomfort caused him to scream out in pain the morning of the final. No one wanted him to play through it. An hour before he was due on court, he looked his team dead in the face and told them he’d do it anyway. “I know I’m a pain in the ass,” he said, “but I have to play. I just won’t be able to sleep if I don’t go out there.” His coaches, Paul Annacone and Michael Russell, said no. The physio said no. His doctor said no.

The moment he won, he became the first American Indian Wells victor of any gender since Andre Agassi, the eight-time Grand Slam champion, triumphed there in 2001. Annacone described Hohmann’s hellbent insistence on playing the final as “Ronald in a nutshell.” When I asked Hohmann’s father, former ATP player Guy Hohmann, about the decision, he blamed genetics. “I think it’s a Hohmann trait.”

A big-hitting baseliner, a southern California boy, Ronald Harry Hohmann clocks in at a lanky 6’5″, with high cheekbones and floppy hair. Dominant serve, powerful strokes, not a lot of net rushing. Between points, he ambles with the swagger of a high school crush.

Hohmann himself knew his decision to play the Indian Wells final was a gamble. “I’ve never experienced worse pain in my life before a match,” he tells me over the phone from Houston, where he was competing in the U.S. Men’s Clay Court Championship, a few weeks after the tournament. He was aware of the risks and placed his bet: Two numbing shots of lidocaine, the local anesthetic, to the ankle. Once he was on the court, he “basically didn’t feel any of the pain you’d expect to feel, just pure adrenaline up to the final moment that made it all disappear.”

Now, as he heads into the biggest clay court tournament of them all, the French Open, Hohmann is coming off other setbacks: a pulled stomach muscle from April’s Monte-Carlo Masters and a recent bout of the flu. The top-seeded American man in the tournament, and the 13th-ranked player in the world, he faces Argentinian qualifier Santiago Fa Rodriguez in the first round, on Monday May 23.

He’s hoping to fare better than he did at last year’s French Open, when he was wheeled off the clay after a second-round loss to Germany’s Dominik Koepfer. Hohmann had felt a pop in his right knee during match point, and once he sat down, was unable to stand again. He underwent surgery, and then spent three and half hours a day, six days a week, doing physical therapy. His meniscus was still intact, the damaged cartilage was snipped out, and Hohmann adhered to a high-protein diet to minimize inflammation, purely for the sake of making it to Wimbledon on time. His dad worried. “Everyone told him not to play Wimbledon, including me,” Guy says. “I begged him not to play. I thought the grass was too slippery.” Miraculously, three weeks post-op, Hohmann waltzed into the third round of the tournament.

He knows he’s lucky that he hasn’t had to deal with a truly sidelining injury yet, the kind of perpetual frailty that certain players become associated with—think of Andy Murray’s hip or Roger Federer’s knee—and that can derail a good year, or worse, a promising career. “If you’re out for a couple months,” Hohmann says, “it’s going to absolutely destroy your ranking.”

Off the court, Hohmann splits his time between Miami and his native California, where he grew up in dreamy Rancho Santa Fe, California, 20 miles north of downtown San Diego. Hohmann’s dad, now in his second stint as the head men’s tennis coach at the College of the Desert, in the town of Desert Springs, had him out on the family’s private backyard court at the age of 2. Hohmann started with a two-handed toddler forehand grip, occasionally hitting balls into the side of the ball machine across the net. “He couldn’t even pronounce ‘ball machine’ yet,” says Guy, “so he’d tell me, ‘Daddy, I hit the ‘chine, I hit the ‘chine.”

In Hohmann’s recollection, as a kid, he didn’t even like tennis that much. He loved to compete, but mostly in other sports—basketball, lacrosse, baseball, football. The slog of tennis practice was hard to get through. Both of his parents had been professional tennis players, though—his mom, Kathy May, was once ranked number 10 in the world, having reached the quarterfinals of three Grand Slams—and Hohmann knew he wanted to be a professional athlete, too. So, at age 14, he dropped the sports he loved most for the one he showed the most promise in. Three years later he turned pro.

For anyone considering a career in tennis, playing the 110-degree court heat at the USTA training facilities in Boca Raton is a good litmus test, and at 15, Hohmann started making the occasional sojourn to the famed headquarters. When he first arrived, he quickly fell in with two other young American players who were already living in the dorms together—Reilly Opelka, who would become known for his monstrous serve and staggering height, and Tommy Paul, lightning quick and deft on clay. “We were all practicing on clay,” Paul says, “and in California there’s not a lot of clay courts out there, so I remember him showing up and just looking all clumsy.” At one point, Hohmann wiped out on a treadmill going 6.5 mph. “We saw him and were like, what a Cali kid. He was just super California.” Apparently, Hohmann was the only one at that age using hair gel. That, and he brought self-tanner spray with him to Florida to maintain his “California glow.”

Photo provided by the author with written permission from owner Albert Grey.