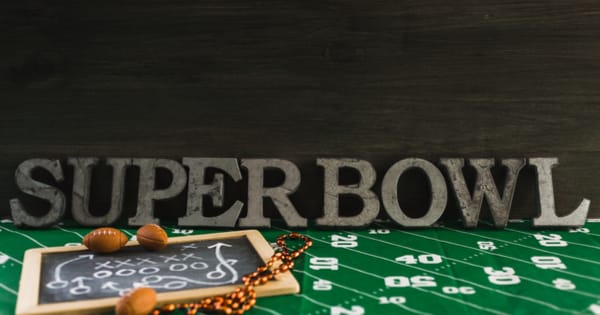 1. I never really watch the Super Bowl. For the last two years, my daughter has had a lot to do with that: bedtimes, bottles, and poopy diapers — you get the picture. But even before Emersyn Lynn Cranor came I along, I’d still get lost in the cheese dip and the commercials, sidetracked by family and friends. Maybe that’s a good thing. After all, it is just a game.

What about you? Do you plan to actually watch the game tonight? Or will it just be background noise at your party?

2. My most vivid Super Bowl memory was Janet Jackson’s “wardrobe malfunction,” and again, I didn’t even see it. It happened in high school. I was with a church group at my girlfriend’s house, and like most teenage boys, I wasn’t too excited about watching Michael Jackson’s sister and a former member of N’SYNC dance around at halftime, so I went to the bathroom. When I returned, Justin Timberlake had just uttered his now famous line, “I’m gonna have you naked by the end of this song,” and Ms. Jackson was already all covered up. Most of the church groups’ mouths were still open, eyes wide, but my girlfriend was just grinning, glad I’d missed the show.

3. Say what you want about Tom Brady and the New England Patriots, but the dude is a living legend in the Book of Eli. It seems like almost every single Super Bowl memory I have involves the age-defying quarterback. Brady is the best to ever play the game. Period.

And no, I don’t hold anything against the 199th pick of the 2000 NFL draft for his “Deflategate” debacle. Nearly every pigskin I ever threw in high school and college was probably a few pounds under the legal limit. What can I say; my hands are little. Maybe Tom’s are too.

4. Best Super Bowl commercial of all time: Suburban Auto Groups “Trunk Monkey.” Y’all remember that one? If not, Google it and get ready to laugh. Hard.

5. Church youth groups and Super Bowls Sundays are woven together in my memory. Seems like an odd combination, considering all the racy “Go Daddy” commercials and the scandalous halftime shows. But I’d be willing to bet at least half of the Super Bowls of my youth were watched at the First United Methodist Church in Russellville, Arkansas.

Is that still a thing? Do the youth groups of today still gather and pay homage to the gridiron gods and the glowing screen? Man, I sure hope so. It was fun!

6. Finally, I’m going to make a prediction. As a former coach and player, I don’t like to do this. Mainly because I’ve been out on that field, I’ve played the game, and like I said last week — footballs are shaped funny. There’s just no telling which way one will bounce.

But here goes nothing: I’m taking the Patriots over the Rams: 35-27. It’s hard to beat experience, and Brady and the boys have it spades. Random fact: Jarred Goff (the Rams’ starting quarterback) was only 7 years old when Tom Brady won his first Super Bowl in 2002 against the St. Louis Rams!

Send me your predictions along with answers to any of the questions I’ve posed here. I’ll pick a few to feature in next week’s column.

One last thing: The Monday after the Super Bowl should be declared a national holiday!