We are now at the sickening part of the DeShaun Watson story where the serial sexual abuser gets a woefully short suspension, after signing a contract that makes him the highest paid QB in NFL history. And he is supported by his team and their fans.

We are now at the sickening part of the DeShaun Watson story where the serial sexual abuser gets a woefully short suspension, after signing a contract that makes him the highest paid QB in NFL history. And he is supported by his team and their fans.

We have previously covered the history of all of this up through the point that DeShaun Watson was traded from the Texans to the Browns and signed his monster contract:

“When I see headlines and quotes from NFL talking heads explaining the Brown’s deal as showing that the “Browns were desperate at QB”? All I can think of, is well, we are desperate for humanity”

Earlier this week, former Federal Judge Sue Robinson has handed down a written decision and issued a six game suspension for Watson. (The NFL was seeking a one year suspension, and just this morning the League indicated that it plans to appeal.)

Deshaun Watson. The judge for the NFL said his actions were ‘the most egregious pattern of misconduct ever reviewed by the NFL’. Only gets 6 games and is rewarded with the best contract in football history in the midst of it. Just a reminder of how messed up our world can be.

Especially considering Judge Robinsons findings that Watson’s acts met the civil standard for sexual assault and showed such an egregious pattern of misconduct that she effectively banned him from getting private massages. 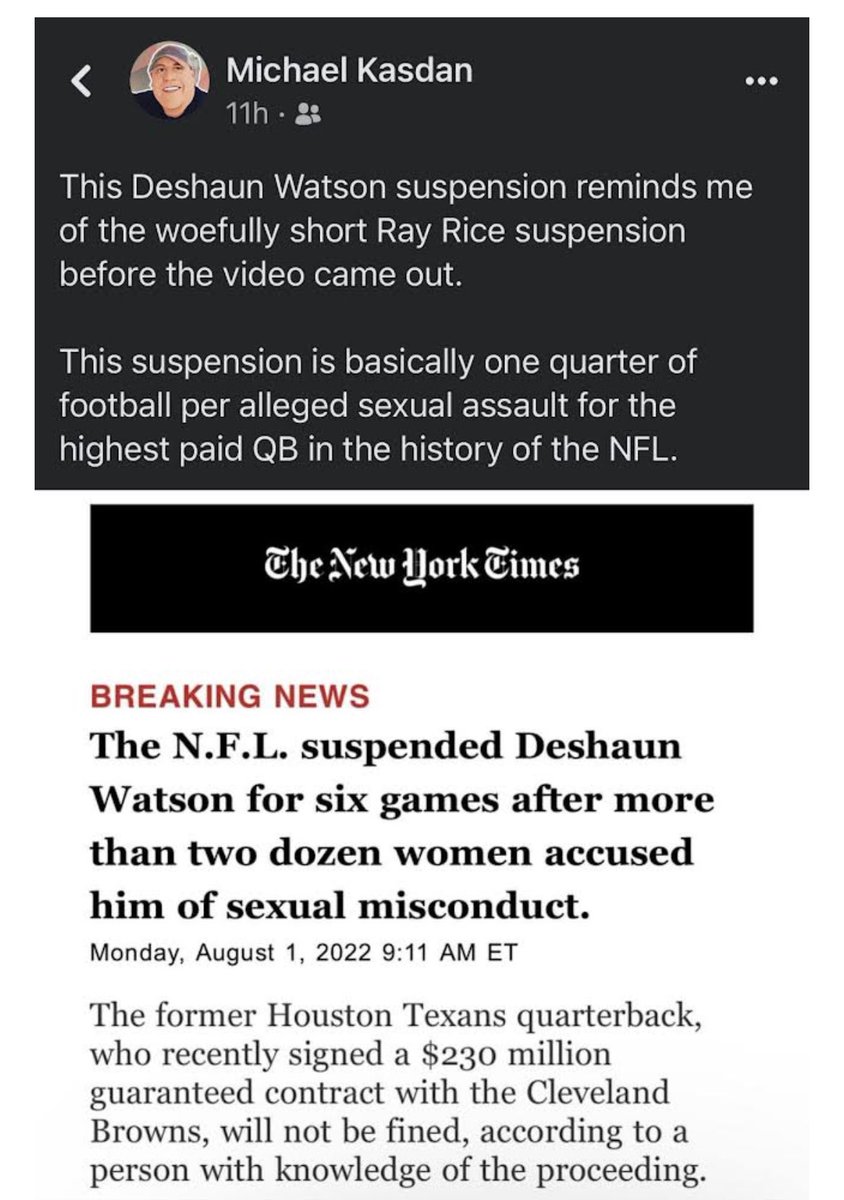 Despite this and despite the Judge’s finding that Watson showed no remorse, the Browns press release says they’re sure he is remorseful!

Watson has *never* expressed remorse – in fact Judge Robinson found he was not remorseful.

And those individuals weren’t “triggered.” They were sexually harassed/assaulted.

And fans are saying they “have Watson’s back.” Like he’s the victim and this is some fun comeback story. This ain’t Rocky.

But hey, Watson is an extremely talented QB, and the Browns really needed one. Amirite? Priorities.

One huge problem – and we can say the same about social justice and our criminal justice system – in terms of the punishment is that Judge Robinson is applying the precedent from the NFLs own history.

She says this is longest suspension ever for non violent conduct.

And that is true.

But is the NFLs own history of suspensions – which have themselves been woefully short for off-the-field conduct – really be the measuring stick in 2022 if we are trying to get this right?

The other issue that jumps out is our media – still treating this as a “woman’s issue:”

“With female fans important to the NFL, this puts the League in a tough position.”

Thanks, ESPN. But men – and all humans – should care and be outspoken about this issue too. Can we please stop with this nonsense? It is not and should not be a man/woman issue to care about sexual assault.

Five years ago, I attended the CNN Town Hall on the #MeToo movement. We said back then that it was “a watershed moment in our country’s history and culture.” But we have not risen to the moment.

Earlier this year, I penned, “We Haven’t Made Nearly Enough Progress Since The #MeToo Movement Started. Men Need to Do Better.” We have not made nearly enough progress. The DeShaun Watson story is another illustration of that.

This is not just a football issue. It’s an “us” issue.

FacebookTweetPinEmailShares53
We use cookies on our website to give you the most relevant experience by remembering your preferences and repeat visits. By clicking “Accept”, you consent to the use of ALL the cookies.
Do not sell my personal information.
Cookie SettingsAccept
Manage consent