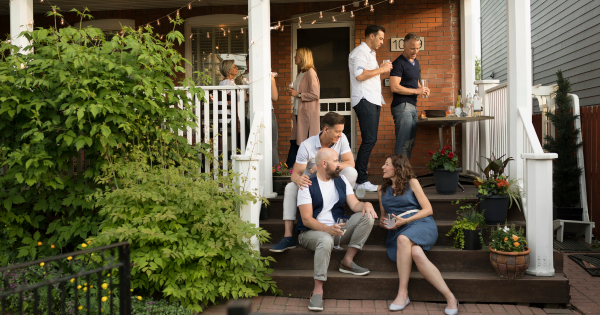 In the small state of Vermont, residents log on to Front Porch Forum, an online service, to ask for recommendations for a plumber, or to borrow a ladder, or to discuss the school budget. Unlike other social media, however, postings are aggregated and sent as a digest typically once a day. So members read postings from their neighbors only after they have been reviewed first by Front Porch Forum’s team of moderators. Michael Wood-Lewis, a founder of Front Porch Forum, spoke to Ouishare about the platform’s role in building community, increasing social capital, and, most recently, its take on Big Tech.

Front Porch Forum is an alternative to Big Tech. In Vermont, if you need a ride to the airport, you can use Uber or Lyft and get an efficient ride from a stranger you’ll never see again, or you could go to Front Porch Forum and ask your neighbours instead. It’s a little less efficient, it might take some more time, and you may need to talk to six or seven people, but you’ll get your ride.

Instead of interacting with algorithms and crowds of strangers on Big Tech platforms, in Vermont people are interacting with their neighbours on Front Porch Forum. The net effect of all those back-and-forths over time is a big increase in social capital among neighbours. This leads to stronger and more resilient local communities.

People are able to increase their social capital, But how are they incentivized to come on board?

Our outreach happens almost always on a grassroots level and through word-of-mouth. We get early adopters and they tell their friends, and so it goes. We work with community librarians, elementary schools, nonprofits etc. We post flyers and put the word out every way we can.

Some communities do not reach a tipping point for several years and for others it’s immediate. Sometimes people who are resistant to joining Front Porch Forum finally do when they hear about it enough times from different sources, or when they have a specific need.

Their dog goes missing, they need a ride to the airport, they need a free couch. So they sign up, they see that it’s useful, and they stick around.

Does being a neighbourhood social network help with increased engagement and growth?

We have an incredible level of traction and engagement. People speak up and usually post a couple of paragraphs on Front Porch Forum.

It’s not just a smiley face or thumbs up. It’s real engagement.

They are sharing needs, solutions, ideas and concerns, and, so, we see 50% of our members actively posting in a typical year. That’s because people feel comfortable that it’s their neighbourhood. (When) they have issues or concerns, they speak up because it feels smaller and safer.

It also makes for a more vibrant local setting to start a business. For example, if I have an idea to start a cookie business, I can find local suppliers, my first employees, and my first customers all just from my surrounding community on Front Porch Forum.

Ouishare’s study on digital inclusion “Capital Numérique” is focussed on internet use in low-income neighbourhoods in France. What are you noticing in terms of participation from low-income communities in Vermont?

We cover the entire State of Vermont which includes high-income, low-income areas and everything in between. We started in a middle-class neighbourhood which had teachers and other residents with a certain education level. It took off, and I thought it would only work in those neighbourhoods at first. But we expanded and I was proven wrong. All these communities embraced it.

Front Porch Forum usage increases social capital. If your community already has a high level of social capital, it gets higher. If your community has a low level of social capital, it also gets higher, but it doesn’t necessarily catch up. They have both improved, but relative to each other, there’s still a big difference. If there’s a low-income neighbourhood that struggles and has low social capital too, Front Porch Forum definitely brings improvement, but it’s not magic. It doesn’t have the capacity to turn it into a high-income neighbourhood without social problems.

In a recent interview, you made an analogy with the ‘eat local’ movement in the context of the current backlash against the social networks. Do you see the world retreat back to local information networks as the future of social media?

Big Tech social media will be with us for a long time, but I don’t think that their position of unquestioned, unchallenged dominance will continue.

They’re getting knocked down a notch or two. People who are paying attention to the news are realizing the downsides of Big Tech and are starting to look for alternatives. Years ago, there were bumper stickers that said “Kill Your Television”, but TV still exists. It had to scoot over to make room for the internet. I think that’s the path Big Tech and social media will follow.

In my dream scenario, Front Porch Forum will grow its user base even more in Vermont and offer a broader array of services for neighbours, local government, businesses and nonprofits, and be more useful to Vermonters, with the overarching goal of connecting neighbours and building community, and to make local communities more resilient.

At the same time, I would love for every region to have some version of a local Front Porch Forum. Not our platform necessarily, but to each their own.

I don’t think the answer to McDonald’s is Burger King, rather it’s a million unique local restaurants.

And so, that’s my hope, to do ever better in Vermont, and perhaps inspire others to do likewise in their hometowns.

Le Lab Ouishare x Chronos is leading a research-action study called “Capital Numérique” to understand how people living in low-income neighbourhoods use the internet to find work, engage in civic life, and for entrepreneurship. Learn more about Capital Numérique here.

—
This post was previously published on Ouishare and is republished here with a Creative Commons license.
—