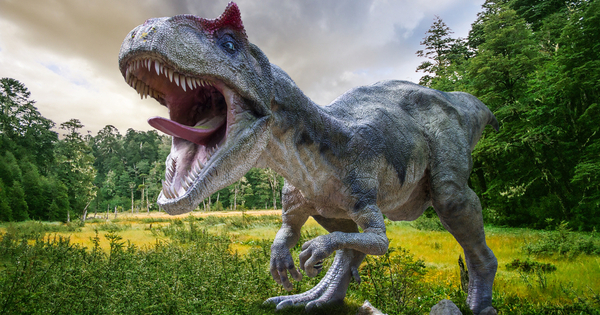 There has always been something thrilling and enticing to me about dinosaurs.

They seem like a fantasy, but they were real-life monsters that actually walked this earth. And, though they are terrifying, there’s something attractive about them too. They seem to threaten humanity as the dominant species, even from their extinction — reminding us that we’re lucky to have made it this far.

The Jurassic Park franchise, especially the first movie, does an incredible job of capturing this idea and sharing it with its global Hollywood audience.

I’ve always been a dinosaur junkie. Growing up in the early 1990s, I was too young to catch the theatrical release of Spielberg’s Jurassic Park movie. I had my fair share of dinosaur pop-up books and action figures though.

Later, I had full-on kids’ dinosaur encyclopedias. In high school, I finally watched all of the Jurassic Park movies (the first 3 that were out, at the time) and I read both of the Michael Crichton books. This inspired a years-long period of Michael Crichton fandom and science fiction consumption.

Now, I write a blog about early retirement. I’m realizing that many of the moments that make the original movie so special also apply to personal finance. Maybe my nerd colors are showing, but I feel a similar sense of intrigue and excitement when it comes to financial planning.

There’s a Sense of Excitement and Possibilities

The opening sequences of both the Jurassic Park book and movie build tension and excitement about the possibility of the dinosaurs. Could scientists really achieve this dino re-boot? And if so, should they? The plot has viewers asking themselves these questions, both in the fictional movie realm and in real life.

When our archaeologist heroes finally arrive at Isla Nublar with dozens of the re-born creatures in full view, it’s an iconic scene in cinematic history. Groundbreaking CGI (that still holds up decently well, considering its age) and an extraordinary music score from John Williams solidify the sense of wonder and was truly unprecedented for 1993 viewers. The main theme still gives me goosebumps, even today.

In the movie, the paleontologists, kids, and businesspeople alike (especially John Hammond) experience moments of joy and awe at the sight of the living dinosaurs. I like that both Crichton and Spielberg showed these people across a spectrum of ages and backgrounds — everyone is in awe of the dinosaurs, at least in some way.

The first time the significance of investing and financial independence “clicks” can feel the same way. The compound growth of your investments is an immensely powerful force. It’s awe-inspiring. Financial independence can create simultaneous control and flexibility with your time. And, like the appeal of dinosaurs, personal finance affects everyone.

Over the past millennia, the concept of financial independence or retirement didn’t exist until relatively recently. The ability to dictate your own schedule and priorities is a thrilling concept that, like the Jurassic Park movie, is really unprecedented in human history.

In Jurassic Park, bioengineering company InGen seems to be motivated primarily by corporate greed. InGen has developed a groundbreaking technique that lets them harvest dino DNA and fill in the gaps so they can create healthy dino eggs.

Rather than using this technology exclusively for research or gradual entrepreneurship, the company goes all-in and develops a theme park attraction with about a dozen species (including ferocious carnivores). Any viewer or reader could sense that something was bound to go wrong.

In the book, and many of Crichton’s other novels, there’s an even stronger tone of warning. Crichton’s stories repeatedly suggest that corporations are bound to take major risks to achieve possible profits, even at the expense of human lives and society as a whole. This worldview may sound extreme, but it’s certainly a valid concern in today’s technological and business climates.

From early on, Jeff Goldblum’s Ian Malcolm was skeptical that the Jurassic Park experiment would go according to plan.

Similarly, you need to maintain a level of skepticism and awareness when it comes to your investments and financial products.

Many people in the financial services industry are not obligated to act in the individual’s best interest. Often, investments and insurance products are sold with huge fees and expenses that seriously reduce the benefit of the product. Customers need to be informed and very careful when making investment and insurance decisions.

You Need to Prepare for the Unpredictable

The Ian Malcolm character is a mathematician and he famously specializes in chaos theory, which the movie references multiple times. Chaos theory “seeks to explain the effect of seemingly insignificant factors. Chaos theory is considered by some to explain chaotic or random occurrences.”

Very small, unpredictable factors can cause ripple effects that lead to significant results.

The Malcolm character acts as the voice of author Michael Crichton — the voice of caution and reason in the face of the greedy, hasty InGen corporation. Through the plot, Malcolm is proven correct as the park’s plans unravel and the death count grows.

Many of chaos theory’s implications can be applied to personal finance, too. Seemingly small or isolated events can lead to major changes in your own financial situation or in the global economy. So, it’s best to be cautious and be prepared. Be aware of the risk and manage it. Some of the best ways to do this are to increase your financial literacy, diversify your investments, or make the retirement transition more gradual and strategic through semi-retirement.

Don’t Go at it Alone

As a bit of a corollary to the chaos theory takeaway, the Jurassic Park movie shows the danger in avoiding or disregarding expert input. None of the scientist consultants in the movie were comfortable with InGen’s plans for resurrecting dinos. InGen was blinded by their own greed and John Hammond, specifically, was blinded by his own enthusiasm — even though the movie portrays him as good-natured, in a way.

In the book, Hammond is killed by the dinosaurs and it takes more of a righteous punishment tone, due to his lack of caution in designing and managing the park.

The Jurassic Park heroes (Malcolm, the paleontologists, and the kids) make it out of the park alive, thanks to their sober critical thinking and problem-solving abilities — skills that InGen lacked.

In the same way, it’s incredibly valuable to not approach your finances completely on your own. Seek professional input from a fiduciary advisor, if you have questions. Engage with the personal finance blogging community to encourage you on your journey towards financial independence. If you have savvy friends or family members, ask for their advice too when you’re not sure how to move forward. You will develop your own sense of what advice is right and wrong. You’ll be encouraged, and you’ll realize that if a financial product seems too good to be true, it probably is.

It’s Not About Dinosaurs (or a Big Bank Account)

The Jurassic Park movie masquerades as a prehistoric thriller, full of monsters and sci-fi-induced adrenaline. But really, as Crichton intended it, it was a cautionary tale. Jurassic Park is about the evils and selfishness of big business, the imperfections of humanity, and a lack of understanding and respect for other life and for the earth’s history.

Likewise, personal finance isn’t just about running up a high score in your retirement account. Progressing towards financial independence is about higher values that it can unlock — controlling your own future, self-actualization, flexibility, and creating a life that’s in line with your own values and goals.

Maybe I’m just a dinosaur and money nerd, but I love seeing the parallels between these two topics. There’s something beautiful that the Crichton books, the original film, and the financial independence movements all share — humble reminders of the best and worst of what we can be as humans.

About Your Money Geek

Michael blogs at Your Money Geek where he shares money hacks, unique insights, and profiles inspirational success stories. When he is not writing about personal finance Michael can be found enjoying a good sci-fi novel.