Get Daily Email
Join/Login CLOSE
Home / Ethics & Values / Big Mac and the Redsk*ns: On Leadership and Sovereignty, Fumble and Fame 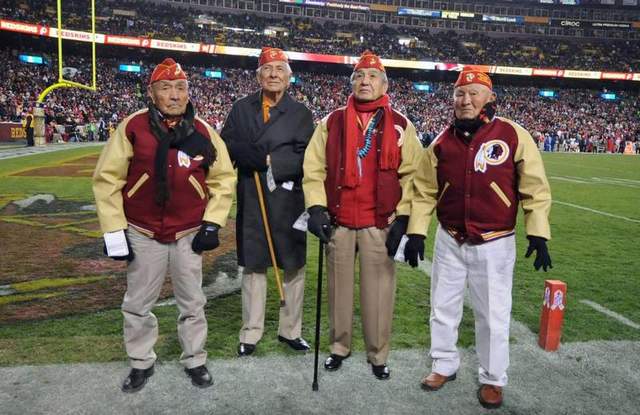 Navajo Code Talkers honored at Redsk*ns game November 2013 amidst calls to for the team to stop using an ethnic slur for name.

When I saw Peter MacDonald on television, still looking dapper and handsome at age 85 in a jaunty red scarf and Navajo Code Talker yellow velvet shirt standing on the sidelines of the Washington Redsk*ns game the week of Thanksgiving I was shocked, but not surprised. He was with three other Navajo Code Talkers, and yet in all the mainstream press coverage of the event no one mentioned he was the former Navajo Nation Chairman, serving an unprecedented four terms from 1971 to 1989 before being convicted on federal racketeering and fraud charges. “Big Mac” as he was known on the Navajo Nation, spent 8 years in federal prison before finally receiving a pardon by President Clinton in 2001. Recently, news has come out that he may have acted unethically in his role as President of the Navajo Code Talkers Association; closing bank accounts, passing Resolutions that place all power with himself in meetings and endorsing the Washington Redsk*ns name in a meeting where only 7 of the 40 living Code Talkers were present.

He was our Navajo Nixon, and was once again in the national news and yet, I was amazed that the same publications–like the New York Times–who once covered his every move as Navajo Nation Chairman, seemed to have completely forgotten who he was. In every media mention he was described only as the Navajo Code Talkers Association President and nothing more.

Family members of the Code Talkers are outraged. Ron Kinsel, son of Code Talker John Kinsel, told Indian Country Today Media Network that his dad did not approve of the endorsement or how the vote was conducted. “It was done without the association’s awareness. They were trying to pass it without a quorum.”

The Facebook responses on the Navajo Code Talkers’ page were more to the point:

“People are crying. I almost threw up when I read it.”

“Big Mac” as he was known on the Navajo Nation played a big part in my childhood. Shimaasaani (my maternal grandmother) was a huge Peter MacDonald supporter. My mother and her siblings would shake their heads when he would come to Cameron, Arizona on the reservation and call on my grandmother whom he called auntie and in a fit of “MacDonaldmania” she would sell off yet more cattle to support his latest campaign.

There were also the long-distance phone calls from my grandmother calling from the Trading Post in Cameron (my grandparents had no telephone, running water or even an indoor toilet) where she’d spend the whole time talking to my mom in Navajo about the latest initiative of Peter MacDonald to advance our nation’s sovereignty. My mom would hang up the phone in our kitchen, looking dispirited. I was too young to understand. When I visited my grandmother she would try to talk to me in Navajo about MacDonald, showing me the framed photo she kept of him and I found myself, although unable to understand her words, excited and hopeful about what he might do for us. My grandmother had a vision of her own, shared so many of her own generation of a Navajo Nation that would truly represent and defend the interests of Navajo people. She passionately wanted that for the future and for her grandchildren and she was willing to give speeches in Navajo at the Chapter House elucidating her vision, firing up Navajo voters and to even sell her cattle to make it happen.

So it was a shock to me one day after a phone marathon, my mother turned to me in a fit of frustration and said, “You know, not once did she ask about you, about her grandchildren. It was all Peter MacDonald, this, Peter MacDonald that.”

He did say things that would inspire any Navajo of any age.  Reading an article from the Prescott Courier from January 10, 1979 covering his inauguration, Big Mac is quoted as saying, “How long are we to permit the federal government to force the involuntary uprooting of thousands upon thousands of our people from lands? A nation that cries tears for Palestinian refugees, Cuban refugees, for Hungarian and Vietnamese refugees for political refugees, has no business creating a class of Navajo refugees.” He is reported in the same article to have been asked if the Navajo Nation would one day become the 51st state to which he answered no.

It’s hard to imagine today, in 2014, any reporter asking a Navajo Nation president this question. It’s hard to imagine any Navajo Nation leader having the kind of prominence in American media that MacDonald did.  The New York Times described him as “the most powerful Indian in America.” He was a member of CREEP, President Nixon’s Committee to Reelect the President, and photographed in the Oval Office talking with Nixon looking like equals.

“We were just a Navajo tribe run by the Bureau of Indian Affairs,” he remarked to a New York Times reporter. “I wanted to make us a government that’s respected.”

Things fell apart as he tried to play with power, and his stratagems for punishing his Republican allies like Senator Barry Goldwater (Arizona) for not showing enough support in the Navajo-Hopi land dispute. That effort failed. He proved Navajo votes mattered in Arizona elections by helping the Democratic candidate win the governor’s race by a margin less than the Navajo votes cast for him. But “Big Mac” was not prepared for Goldwater retaliating by siding with the Hopis. This ended tragically, with thousands of Navajos being forced off their land in one of the largest mass movements of people in recent Native American history.

And this is the Peter MacDonald I thought of him when I saw him on the Redsk*ns field. The consummate politician, MacDonald is willing to play any side to further his political agenda. During his years as Navajo Nation chairman, Big Mac acquired a taste for the trappings of the executive suite.  While he traveled in chartered planes, rumors of kickbacks began to tarnish the hard, bright vision he had inspired in traditional Navajos like my grandmother. Symbolized even today by the red silk cravat he alone adds to the Navajo Code Talker uniform.

What led to his downfall? In 1993 Peter MacDonald was sentenced to 14 years in prison for trying to over-throw the tribal government, inciting a riot in Window Rock, Arizona, resulting in the deaths of two of his own supporters, and for fraud, racketeering and conspiracy convictions. Now, more accusations arise out of his leadership of the venerable Navajo Code Talker’s Association. In his collusion with men like Washington Redsk*ns owner Daniel Snyder, he is still a man defined by his attempts to use power as seen in the Netflix tv series House of Cards which features a Native American tribal leader played by Comanche actor Gil Birmingham.

When my mother told me my grandmother cared more about Peter MacDonald than she did about me, she pushed me yet further into that idealistic vision she held out for our Navajo people. Her generation out in the larger world, fluent in English and college-educated wanted to look beyond charismatic figures for answers. A world where we can be Navajo on our own terms, much like MacDonald described; but how do we do so without getting caught up in the net of those with pretensions to power? How do we address the powerful without serving them or being cut down by them?

In a 1989 New York Times article about the embattled Chairman, a reporter recounted MacDonald’s meeting with an elderly Navajo medicine man who was a supporter. The old man is described as adhering to tradition, and “walking in beauty,” and “living in harmony between the four sacred Navajo mountains, under what the people call nááts’íílid…the rainbow that stretches over us and protects us.”

Nááts’íílid adorns the Navajo Nation seal and is the Navajo word for sovereignty. The promise of it sometimes feel like a lure and as ephemeral as reaching for an actual rainbow.  I hope we can find our way to it without falling prey to the monsters the Hero Twins had to fight to get to the Sun, their father. And certainly, as the cautionary tale that is Peter MacDonald’s life teaches us—out there, there are monsters out there.

I thought this article was going to be another ignorant attack on the use of “Redskins” as the Washington NFL’s franchise nickname and I suppose to the extent that it was an attack on Peter McDonald, who supports the name it could be viewed that way. Redskins is not a racially offensive term and never has been. Historically, and you have to have some knowledge of history to know this, but it refers to the practice of the Algonquin Indians to paint their faces red in preparation for battle. It was an Algonquin tool to intimidate their enemy. All those… Read more »

So is “towelhead” not offensive because it only refers to something they put on their heads? Your argument is weak.

Facebook232TweetPinEmail1Shares233
wpDiscuz
3
0
Would love your thoughts, please comment.x
()
x
| Reply
Share this ArticleLike this article? Email it to a friend!
Email sent!