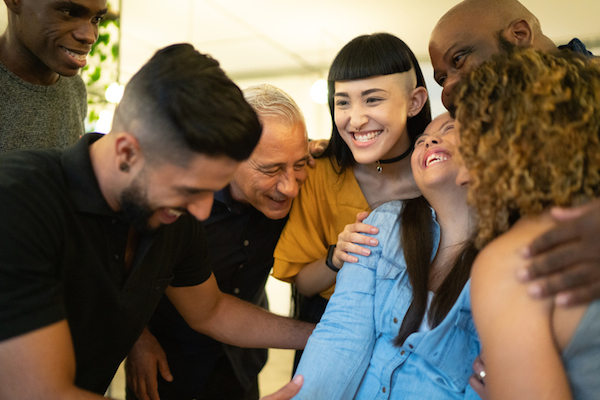 For millennia, humans have imagined a peaceful and just world,” say Riane Eisler and Douglas Fry, in their monumental book, Nurturing Our Humanity: How Domination and Partnership Shape Our Brains, Lives, and Future. “Sometimes we only imagined this world in an afterlife. But over the last centuries, many of us have imagined it right here on Earth. Not a utopia, not a perfect world. But a world where peace is more than just an interval between wars, where dire poverty, brutal oppression, insensitivity, cruelty, and despair are no longer ‘just the way things are.’

In my recent article, “The Ship of Civilization is Sinking: Do Not Lose Hope. Find Your Tribe,” I shared the vision of our future world I was given in a sweat lodge ceremony in 1995 and four truths revealed by the vision:

Here, I’ll share four more truths that can guide those who are ready to reclaim “the more beautiful world our hearts know is possible,” as my colleague Charles Eisenstein puts it.

Riane Eisler is a systems scientist, cultural historian, and President of the Center for Partnership Studies. Douglas P. Fry, is internationally renowned as a peace anthropologist. In the chapter on “The Original Partnership Societies” they say, “The nomadic forager lifeway approximates conditions under which the genus Homo appeared about two million years ago and more recently under which modern Homo sapiens emerged roughly 40,000 or 50,000 years ago.”

2. The Partnership way of life was the most successful period we’ve ever experienced.

After a lifetime of studying nomadic foragers throughout the world, the anthropologist Richard Lee concluded, “This way of life has been the most successful and persistent adaptation man has ever achieved. If, as many theorists think, true affluence is measured by the absence of need and the enjoyment of extensive leisure time, then the hunger-gatherers are, in the words of anthropologist Marshall Sahlins, “the original affluent society.”

In The Tender Carnivore and the Sacred Game, biologist Paul Shepard concludes, “Although it has long been fashionable to describe it so, the world of the hunting and gathering people is not a vale of constant demonic threat and untold fears. It is a life of risk gladly taken, of very few wants, leisurely and communal, intellectual in ways that are simultaneously practical and esthetic. Most pertinent to our time, it is a life founded on the integrity of solitude and human sparseness, in which humans do not become a disease on their environment but live in harmony with each other and with nature.”

3. The Dominator Culture will be seen as short, dead-end, aberration that lasted for less than 1% of human history.

Biologist and author Jared Diamond suggests that the beginning of agricultural revolution which began around 10,000 years ago and our march towards civilization may have been “the worst mistake in the history of the human race.” He goes on to say, “With the advent of agriculture the elite became better off, but most people became worse off. Instead of swallowing the progressivist party line that we chose agriculture because it was good for us, we must ask how we got trapped by it despite its pitfalls.”

One interesting theory of how we got trapped was formulated by natural scientist James DeMeo, PhD. In his twenty-year study culminating in his encyclopedic, yet readable, book, Saharasia: The 4000 BCE Origins of Child Abuse, Sex-Repression, Warfare and Social Violence in the Deserts of the Old World.

Dr. DeMeo presents substantial proof that our ancient ancestors were non-violent, and far more social and loving than are most humans today. Moreover, the study points to a dramatic climate change in the Old World, the drying up of the vast Sahara and Asian Deserts, with attending famine, starvation and forced migrations which pushed the earliest humans into violent social patterns, a trauma from which we have not yet recovered in over 6,000 years.

If he is right, the reason we got trapped in an unsustainable way of life was the result of environmental trauma that resulted in depressed and angry humans who operated from fear and aggression. It’s clear to me that what may have begun 6,000 years ago as a “natural” environmental crisis is now being fed by man-made causes that humans can, and must, address if we are going to survive and thrive on planet Earth.

4. We can’t rely on the Dominator Culture to fix our problems. Our only hope is a return to our partnership roots.

The above quote is from a Saturday Night Live skit on the weekend following release of a report from the United Nation’s Intergovernmental Panel on Climate Change. The report was one of the most dramatic ones yet, predicting that some of the most severe social and economic damage from the rise in global temperatures could come as soon at 2040.

One of the characteristics of the Partnership Culture is based on the power of people to solve big problems when we all work together. The monetary costs are less important when the survival of our children, grandchildren, and future generations is at stake.

For those who believe the real Partnership is impossible in today’s world, I suggest you are viewing the world through Dominator lenses.

John Seed, the Australian founder of the Rainforest Information Centre, tells of a meeting he had with a group of Australian Aborigines in Sydney. After the meeting, they stepped outside into the night air. The great city spread out before them. One of the native Australians asked, “What do you see? What do you see out there?”

John looked at the pulsating freeways, towers of anodized glass and steel, ships in the harbor, and replied, “I see a city, lights, pavements, skyscrapers…”

The native Australian said quietly, “We still see the land. Beneath the concrete, we know where the forest grows, where the kangaroos graze. We see where the platypus digs her den, where the streams flow. That city there…it’s just a scab. The land remains alive beneath it.”

The believe the Partnership culture remains alive and well underneath the scab of civilization. Indigenous peoples have not forgotten and most of us, deep down inside, remember our roots in the Partnership Culture. There are many individuals and organizations that are helping us return home and bringing us back to the future. One I admire greatly is Riane Eisler’s Center for Partnership Studies.

Another is the work of Bruce Lipton and Steve Bhaerman. In their book Spontaneous Evolution: Our Positive Future (And a Way to Get There From Here), they offer a similar vision to the one I had in 1995 in the Sweat Lodge. “To paraphrase American revolutionary Tom Paine, these are soul-trying times,” they say, “Madness and dysfunction seem inescapable.”

One view is that the Ship is sinking and we are all doomed. Another is that the Dominator culture is going under and new lifeboats are connecting and bringing us back to a new Partnership Culture. “If you find it hard to imagine that we can ever get from the crises that we are facing now to a more loving and functional world, consider the tale of another world in transition,” they remind us.

Imagine you are a single cell among millions that comprise a growing caterpillar. The structure around you has been operating like a well-oiled machine, and the larva world has been creeping along predictably. Then one day, the machine begins to shudder and shake. The system begins to fail. Cells begin to commit suicide. There is a sense of darkness and impending doom. From within the dying population, a new breed of cells begins to emerge, called imaginal cells. Clustering in community, they devise a plan to create something entirely new from the wreckage. Out of the decay arises a great flying machine—a butterfly—that enables the survivor cells to escape from the ashes and experience a beautiful world, far beyond the imagination.

If you’re reading this article, you are likely one of those imaginal cells who care ready to shift your belief system towards creating “the more beautiful world our hearts know is possible.” And you’re not alone. There are millions of others, but you won’t learn about them from the mainstream Dominator media.

You can learn more about the work of Steve Bhaerman and Bruce Lipton, here.