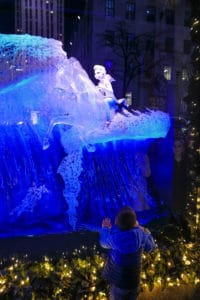 On Monday, November 25, the enchanting world of Disney’s “Frozen 2,” which is now playing in theatres nationwide, came to life at Saks Fifth Avenue with the debut of its iconic holiday windows in collaboration with Disney. 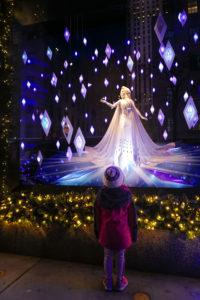 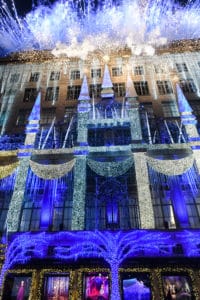 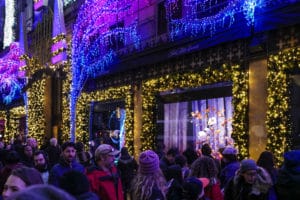 The dazzling holiday windows were unveiled with a special musical performance by Idina Menzel, who is the voice of Elsa and also this year’s Saks Holiday Book cover star. 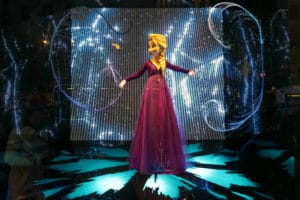 Saks’s center six windows on Fifth Avenue each depicted Elsa’s extraordinary journey to discovering her own power as she navigates her way through the four spirits of nature- wind, fire, water and earth. Adored characters, Olaf, Kristoff and Anna also appeared throughout the vignettes as they championed Elsa along the way.

The production also included a theatrical light show on the façade of the Saks Fifth Avenue NYC flagship and entertainment from the Young People’s Chorus of New York City, dancers and characters from “Frozen 2.”

In addition to offering exclusive holiday products inspired by the film, Saks will also host an immersive activation on the 9th Floor of its flagship store, Disney’s Frozen 2 Enchanted Forest Experience at Saks where visitors will be transported to the magical world of “Frozen 2” and experience Elsa’s journey through the enchanted forest, encountering the four spirits of nature and other beloved characters along the way.

NEW YORK, NEW YORK – NOVEMBER 25: A view of the interior during the Disney and Saks Fifth Avenue unveiling of “Disney Frozen 2” holiday windows on November 25, 2019 in New York City. (Photo by Craig Barritt/Getty Images for Disney)

The activation will run from Tuesday, November 26 through Tuesday, December 24. Saks will donate $5 from the sale of each ticket to New York-Presbyterian Phyllis and David Komansky Children’s Hospital.

NEW YORK, NEW YORK – NOVEMBER 25: A view of the interior during the Disney and Saks Fifth Avenue unveiling of “Disney Frozen 2” holiday windows on November 25, 2019 in New York City. (Photo by Craig Barritt/Getty Images for Disney)

If you’re in NYC over the holidays it’s a must see and a great cause!

Why was Elsa born with magical powers? What truths about the past await Elsa as she ventures into the unknown to the enchanted forests and dark seas beyond Arendelle? The answers are calling her but also threatening her kingdom. Together with Anna, Kristoff, Olaf and Sven, she’ll face a dangerous but remarkable journey. In “Frozen,” Elsa feared her powers were too much for the world. In “Frozen 2,” she must hope they are enough. From the Academy Award®-winning team—directors Jennifer Lee and Chris Buck, producer Peter Del Vecho and songwriters Kristen Anderson-Lopez and Robert Lopez—and featuring the voices of Idina Menzel, Kristen Bell, Jonathan Groff and Josh Gad, Walt Disney Animation Studios’ “Frozen 2” opened in U.S. theaters on November 22.

ABOUT DISNEY PARKS, EXPERIENCES AND PRODUCTS

Disney Parks, Experiences and Products brings the magic of The Walt Disney Company’s powerful brands and franchises—including Disney, Pixar, Marvel, Star Wars, ESPN, 20th Century Fox, and National Geographic—into the daily lives of families and fans around the world to create magical memories that last a lifetime. When Walt Disney opened Disneyland in Anaheim, California, on July 17, 1955, he created a unique destination built around storytelling and immersive experiences, ushering in a new era of family entertainment. More than 60 years later, Disney has grown into one of the world’s leading providers of family travel and leisure experiences, with iconic businesses including six resort destinations with 12 theme parks and 52 resorts in the United States, Europe, and Asia with approximately 160,000 cast members; a top-rated cruise line with four ships and plans for three more to be completed in 2021, 2022, and 2023; a luxurious family beach resort in Hawai‘i; a popular vacation ownership program; and an award-winning guided family adventure business. Disney’s global consumer products operations include the world’s leading licensing business; one of the world’s largest children’s publishing brands; one of the world’s largest licensors of games across platforms; more than 300 Disney store locations around the world; and the shop Disney e-commerce platform. These experiences are created by Disney Imagineers, the creative force behind experiences found in Disney theme parks, resort hotels, cruise ships, and consumer products—including books, games, and merchandise.