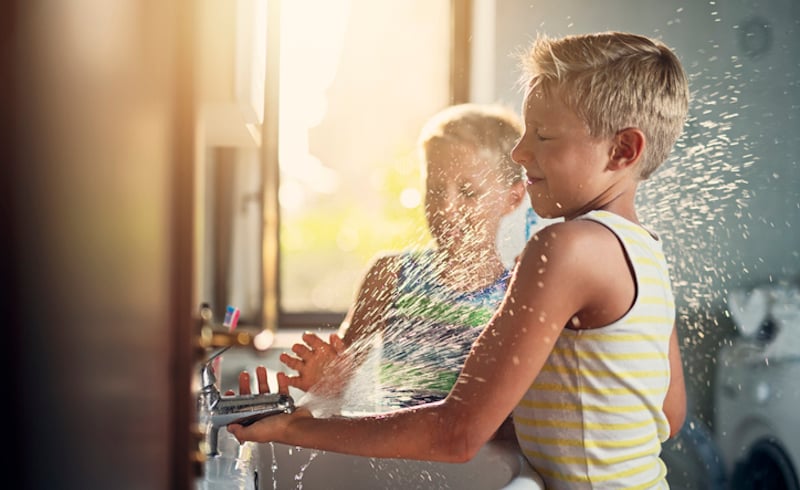 “You know how boys are.”

My son, in third grade, is involved in two afterschool activities this year. One is gymnastics, where he’s in a boy’s class at the local YMCA. Even though it’s an Olympic sport, we struggle to find classes for our boy: Even in a place where the M stands for Men, there is lots of support for girls’ gymnastics but not so much for boys.

I don’t blame the YMCA, I blame the culture. Boys are pushed away from gymnastics because people think it’s a girl’s activity. I reckon many people wouldn’t even call it a sport. I’ve seen the classes, though. This is not a hobby. This is a sport.

The other activity my son is involved in is called Math Pentathlon. This is a grade-level event where children learn five specific mathematics-based games and then compete with children from other schools. It’s early days yet, before the girls have been told clearly and solidly that they’re not “supposed to” like math, so the event is fairly gender balanced. Last year’s second/third grade team from our school, for instance, had three boys and three girls.

When I take my son to gymnastics, I sit in the stands, reading or watching him or listening to the other adult chaperones. Right now, he has a new coach, who is a woman. One of the other chaperones (also a woman) is fond of commenting on how the boys are misbehaving because boys are different than girls and the coach doesn’t know how to deal with that.

Last week was my son’s first session of Math Pentathlon for the year. Since he was repeating, my son sat with a group of new players to help them out. I sat with another table of students as they learned their first game. One of the students at my table was a second grade girl. Silly, like my son. Polite, like my son. Easily distracted, like my son.

Science tells us that there are some behavioral tendencies that are determined by gender. Some of these are tied to testosterone and estrogen, and some are tied to minor brain structure differences. However, as discussed in the excellent documentary “The Mask You Live In,” the inherent biological differences between the genders are minor compared to what our culture creates. “If you gave the same psychological tests to girls and boys,” writes Variety in their review, “the responses would overlap by 90%.”

“Boys will be boys.”

I hear the statement “Boys will be boys” far too often. When my son is misbehaving and I’m trying to help him understand why his behavior is not acceptable, another parent might chime in with the statement.

As a feminist and an attachment parent, I find the statement and its partner (“You know how boys are.”) to be among the worst things we can say to or about a boy. It’s fatalistic. It implies that boys are inherently problematic. Sometimes it’s said about something minor and silly; sometimes it’s said about something major. But it’s always said to casually dismiss inappropriate behavior.

I was recently in a discussion where it was pointed out that “Boys will be boys” is a logical tautology: It is always true. This is true semantically, but we don’t function solely in the realm of semantics. Semantics involves the precise definition of what words mean, while pragmatics refers to what people intend to communicate beyond the base meaning. When what we say is always true, there must be another reason why we said it.

In this case, “Boys will be boys” serves to exonerate behavior because of innate group membership, rather than holding individuals responsible for their actions. It implies that there is a set of characteristics of “boys” different from those of girls, and that boys who engage in these behaviors are just doing what they were born to do.

People don’t say it to praise the victories of boys. They say it to excuse the failings of boys. It’s fatalistic. It tells boys that they’re destined to do those things.

Equally dangerously, it tells girls that they’re destined to put up with them. Instead of teaching boys not to sexually assault girls (because “you know how boys are”), we teach girls how not to get sexually assaulted. Don’t bare your shoulders in school. Don’t smile indiscriminately. Don’t walk alone at night. Don’t drink alcohol at parties. Always go places with a girlfriend. Don’t let boys into your bedroom.

Ben Affleck used 100 words on Facebook to condemn Harvey Weinstein’s sexual assaults. He used only 10 words on Twitter to apologize for his own. His condemnation of another man’s behavior was worth ten times as much as his own remorse.

This is the direct result of “Boys will be boys.”

Right now, a huge swath of liberal America is rushing to bring Harvey Weinstein to judgment. Harvey Weinstein deserves the harshest of judgments. Is he being torn down, though, because he’s an alleged rapist, or because he was caught?

The little girl at my son’s after school group behaves a lot like him, at least based on that small slice of time. Perhaps she has different interests: We train boys to like dinosaurs and robots while we train girls to like princesses and unicorns. I see that emerging in my boy despite our best efforts, and perhaps those have emerged in her, too.

I recognize that there are things that my son will do because he is eight years old and hasn’t been taught better. But rather than chuckling and saying, “Boys will be boys!”, I teach him better.

Generalized excuses hurt all children. Let’s cut it out.
—

FacebookTweetPinEmailShares292
wpDiscuz
0
0
Would love your thoughts, please comment.x
()
x
| Reply
Share this ArticleLike this article? Email it to a friend!
Email sent!