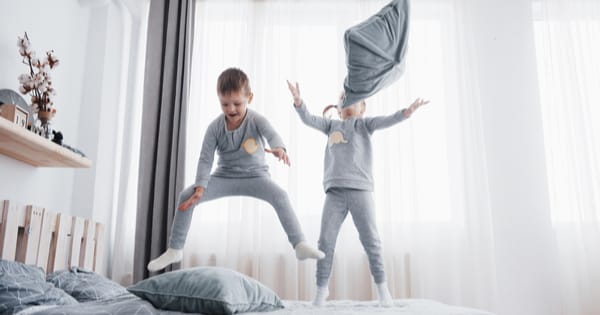 I’m nice and I strove to please my teachers.

I say that I just want my kids to be happy.

But also kind. And smart. And independent. And creative. And change the world. No pressure, kids.

Of course I want my kids to be trailblazers.

Like the kids about whom the teachers throw up their arms and say “what am I going to do with you?” And then they end up being Einstein.

But aren’t genius/artistic/world-changers often miserable, asocial sad-sacks destined to substance-abuse who cut off their own ears and live within prisons of their own artistic genius?

So then will they be happy?

Maybe we should just hope for nice.

But am I trying to raise nice kids? Those rule-following, vanilla, boring goody-two-shoes?

(Who wants to be nice, anyway? Nice is so…insipid. Do you ever want to share a drink with someone first described as NICE? Zzzzzzzzz.)

This reminds me of a hilarious recent tweet I saw: “Parenting looks so hard. You need to raise your kid with just the right amount of trauma so they end up funny.”

Because funny is more interesting than nice.

I’ve been thinking about achievement in the context of my older kid’s soon-to-be immersion in the ballet world. He is going to begin the first ballet classes of his life and, while I’m excited for him, my Libra nature has invented this dilemma: “Do world-changers come from ballet class?”

Think about it: the point of classical ballet is to conform, to dress identically as surrounding dancers, to dance with perfection so that not one pinky finger is ever out of place.

The dress code for these classes is rigid, for both boys and girls. (More on that in my next posting because do not get me STARTED about the anxiety I’m feeling in saying to my kiddo, “sorry. No tutus in this class. It’s a white t-shirt and black pants.”)

At least there’s no hair protocol for these little boys. I guess my little gender renegade will be able to rock a ballet bun.

My French sister (the witch) talks about the point of nursery rhymes was to separate European society from nature so that Little Red Riding Hood stays always to the path (dictated by the church) to never stray (citizens shouldn’t color outside the lines) and to always fear the woods (because nature is bad) and always be nice.

Oh, and sex. Because duh. Nature = sex and sex is bad and the church and society need to tame sex and pleasure. Because people should be worshipping the Church’s appointed dogma, fighting wars, and making stuff for the nobles. Not having sex.

And I see her point. Nursery rhymes teach children the way to be good. To follow rules. To conform. To obey. To be the perfect ballerina/o in the back line.

Now…we all want our kids to be good and obey their parents.

But it’s true – the world is more colorful with the rule-breakers, by those who stray from the path, think differently and write their own destinies.

I suppose it’s all a balance, (Please reference aforementioned Libra nature.)
My kiddo already writes her own rules evidenced by her entire comportment.

So maybe classical ballet will be the perfect balance for her? You gotta learn the basics…

So then you know what rules to break and re-write.

Facebook14Tweet1PinEmailShares15
wpDiscuz
0
0
Would love your thoughts, please comment.x
()
x
| Reply
Share this ArticleLike this article? Email it to a friend!
Email sent!