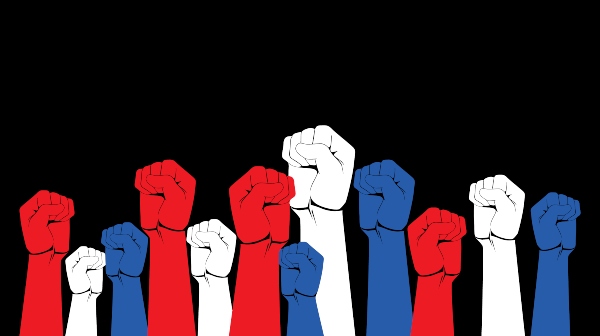 You deserve to have a say in matters that affect you. Everyone does. That’s democracy.

This shouldn’t change when you go to work.

Democratic rights in the workplace — including the right to form a union, and the power to speak up about workplace issues — go hand in hand with a democratic society. But for decades now, those rights have been under assault.

This Labor Day, it’s time we fight to restore them.

Make no mistake: By whittling away at workers’ right to a voice at work, right-wing corporate activists have also been able to curtail workers’ voices at the ballot box, too.

Unionized workers vote at higher rates than non-union workers. States that have adopted so-called “right to work” laws to undermine unions have seen a net decline in turnout.

That’s exactly why corporate lobbyists and their political cronies push such laws — it’s part of their strategy to weaken support for popular proposals that help working people, from higher minimum wages to stronger social insurance programs.

These efforts work hand in hand with voter suppression, gerrymandering, and other efforts to undermine voting rights — as well as with “carve-outs” to labor laws, which exclude categories of workers like farm and domestic workers. Together these abuses disenfranchise workers and lock in poverty wages.

We’ve seen what happens when huge corporations, and the politicians beholden to them, wield all the political power.

They roll back government oversight so companies can engage in dangerous — even deadly — workplace practices. They widen tax loopholes so that companies that operate in our backyards don’t contribute to the upkeep of our communities. And they make corporations “people” with democratic rights far greater than those of actual human beings.

Then they illegally retaliate against workers who try to join together for change. They threaten mass layoffs and the decimation of communities. From the moment a person is hired, she’s told she’s replaceable and compelled to sign away her rights, leaving her on her own against an all-powerful boss.

But increasingly, working people are fighting back.

Around the nation, worker activists are urging lawmakers to prohibit employers from firing people in retaliation for trying to improve their own workplaces. They’re calling for an end to longstanding racist exclusions of caregivers and agricultural workers from labor protections. And, from poultry plants to commercial banks, they’re blowing the whistle on dangerous employer practices that hurt workers and consumers alike.

Working people are joining together to demand a more just economy in other ways, too.

From Walmart workers walking off the job to protest guns sales following the El Paso massacre, to adjunct professors warning that poverty wages affect the quality in the classroom, workers are protecting our democracy.

When call center workers in Mississippi draw attention to low wages and high turnover in critical federal services, and employees of the furnishing company Wayfair walk out to protest the inhumane treatment of immigrants at the border, they’re reminding us of our civic responsibilities.

When teachers fill streets and statehouses to raise the specter of generational harm from underfunded schools, and museum employees lift the veil on pay inequality in arts institutions, they highlight the permanent damage to our country if worker voices are silenced.

Labor Day and the Fourth of July may be separated by several weeks, but the values they embody are deeply intertwined. If we truly want justice, domestic tranquility, general welfare, and the blessings of liberty, we must allow democracy to flourish in the workplace as well as at the ballot box.