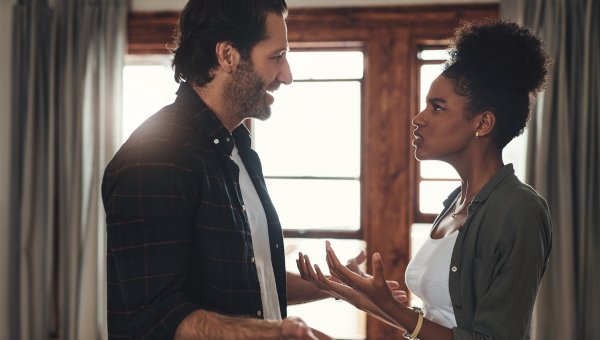 While lots of couples, and the people who advise them, use disagreement and conflict interchangeably; I believe doing so ignores important differences between these two types of interactions.

Differences and disagreements are about what you and your partner want to happen. You can disagree about when to go to the movies, how to discipline your children when to have sexual relations, or where to get the car serviced. When you disagree with your spouse, it is about something not about each other.

Identifying When a Conflict Is Going to Happen

When you say, “You made me so angry when you didn’t do your fair share,” you are using a “common sense theory of emotion,” i.e., that your “anger neurons” and bodily states are directly and uniquely triggered by what your spouse did. This idea justifies how you act toward your spouse, i.e.., you can “justifiably” criticize, yell, avoid, retaliate, etc.

What’s also important about this research is that it suggests that our emotional experiences are greatly influenced by our own personal histories. The personal part of our reaction is that we characterize what they are doing. In the above event, your spouse’s action is not described (he/she did not do something he/she was supposed to do), it is characterized by the way it feels to you; it “feels” like you are being mistreated. Someone not doing something they are supposed to do has some personal meaning to you.

When you angrily (fearfully, hurtfully, etc.) characterize something your spouse did, he/she is susceptible to reacting to you in return, i.e. also having a personal take on the situation. Now you two have a conflict. Whatever the issue, the conflict is now about how you both are feeling toward each other (and your relationship) and the negative thoughts you have about each other that are based on personal history as much as the current situation. The issue now is that he is a “shirker” and she is off on one of her “emotional binges.” This is now a conflict about who is right, who has injured the other, who is the worse spouse—this will not be negotiated.

The way to resolve conflict is for each person to be self-reflective and personally accountable for his/her part in the relationship breakdown. At its simplest, reflection is about a conscious consideration of what you are experiencing for the purpose of learning about yourself so you can act better. Here are a few suggestions about how to do this.

Enhance Your Emotional Intelligence. Your personal emotional reactions can be associated with bodily hormones that ready you for a “quick response” that push you to react to your spouse without appropriate reflection.[2] It will take the effort to not react automatically by criticizing, yelling, avoiding, etc.

Know How You Code Your Emotional Reactions. Psychiatrist David Viscott describes the way we talk about our emotions.[3] Anger can be expressed as being irritated, miffed, teed off, irked, annoyed, furious, or burned. Fear can be expressed as being scared, edgy, jittery, concerned, worried, insecure, uptight, or getting the shakes. Being “hurt” is a catchall term used to describe all sorts of feelings without admitting much; “feeling hurt” is a vague term we use to avoid taking responsibility for what we are saying. Pay attention to how you code your emotional reactions to your spouse so that you can reflect not react.

Learn How to Describe Not Characterize Your Spouse’s Actions. It is a big deal when you act on your emotions, you will characterize not describe your spouse’s action. Your spouse will rarely if ever, experience his/her action the same way you characterize it. Characterizing an action is based on your personal take on the situation. Here is a table with examples of descriptions of actions and how you might characterize what your partner did.

Your spouse will not experience him/herself as “ignoring” you, being “selfish,” being “self-centered,” being a “sex-addict,” or treating you like a “second-class citizen.” And, remember, he/she is very likely to react emotionally (i.e. personally) to what feels like a personal attack when you characterize his/her action. This sets up the conflict. Practice describing not characterizing your spouse’s actions—it will pay off for your relationship and you will feel more grounded and secure.

A version of this post was previously published on PsychologyToday and is republished here with permission from the author.