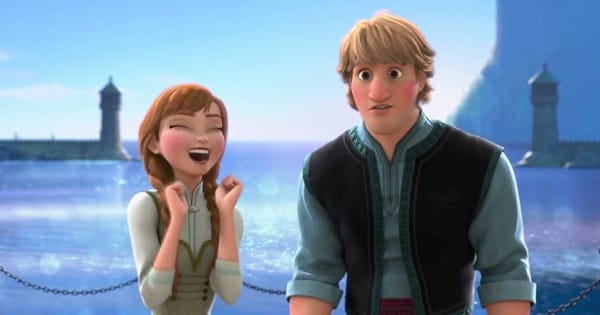 I’ve written a variation on this theme, before, but it’s the greatest hope I have for my kids.

Even Colton, who’s words are limited to “pee-pee” and “nana” gets into it. When he sees anything Frozen, he shouts “Anna!”

As already discussed, our household is ruled by Frozen. (Actually, Thomas the Train still rules, but there’s a lot of Disney princessifying going on.)

Frozen thrills Ellison. He plays all the rolls: Kristoff, Sven and (especially) the sisters. I’ve gotten good at fashioning dresses out of old swaddlers (blankets, not Pampers.)

The other day I figured, “Eh, he hasn’t watched it in two weeks. Why not?” As we waited for the movie to load on my computer, Ellison jumped on the bed shouting, “Hooray! Hooray! I’m so excited to watch Frozen!”

He shouts “hooray” sans irony. I mean, who talks like that? It’s so…earnest, so…“Barney” dialogue.

After a recent snowstorm, we built “Olafs” in our backyard with some play-date friends, a boy (age 5) and his sister (age 3).

When Ellison started singing, “Do you want to build a snowman?” the boy said, “I hate Frozen. It’s all about love. And I hate love.”

His little sister said, “Yeah. I don’t like it, either.”

And in that moment, I felt a desperate need to stop time, grab Ellison, and say, “Buddy, you go ahead and LOVE Frozen with all your heart, just as you do, now. It doesn’t matter what anyone else thinks.”

Their mother rolled their eyes saying, “Whatever. They were both dancing around in Frozen dresses, this morning. Peer pressure. It’s no longer cool for him to like the movie. And his sister’s just following.”

I’ve spouted lessons for my son on this blog. But above all, I wish most for him to hold on forever to that innocence where he loves what he loves. If he’s thrilled with Frozen or football or fungi, I’ll be elated to talk about it.

How I wish he could live divorced from anyone else’s opinion. Watching his captivated face as he’s engrossed/scared/delighted watching Frozen warms my heart.

or “Daddy? Can you drop me off at the corner? I can walk the rest of the way myself.”

But I wish it wouldn’t happen soon.

Son, just hold on to whatever makes you feel joy and free and light and inspired. And if whatever inflames your passion is something that isn’t cool for the outside world, I promise you: it’s safe in our house. So act out Frozen or play football or become bizarrely obsessed with fungi.

Your passion and interests are always safe with me.

I know you’ll be influenced by others far too soon.

But be innocent for as long as possible.

That’s my deepest hope for you, buddy boy.

A version of this post was previously published on ecknox.com and is republished here with permission from the author.