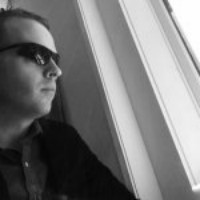 —
HERE’S A COFFEE SHOP SELF-PORTRAIT THAT HAS ABSOLUTELY NOTHING TO DO WITH THE SUBJECT MATTER IN THIS WRITING.

4th grade picture day in elementary school. Another nightmare of a day when the travelling band of goofy gits would come to the school to take individual and class photographs. All so parents could order prints of the dreadful results in order to give them out to family, friends and anyone else who might need something to fill up space on their walls and in their wallets. I wore my bowling league shirt since it was something I felt comfortable in. It was something I identified with easily. Since I was not excelling at any other sport I was involved in, at least I could show off that I was a reasonably competent bowler.

Unfortunately there were other things wrong with my appearance that day. A part of my hair would just not stay down. It stuck up and out all over the place. “Couldn’t you try to wet it down?”, My 4th grade teacher asked me in front of several dozen snickering students.

Of course I had tried that already and even saturating it with water was doing nothing for it that day. By this point I wanted the damn thing over with. I really hated picture day and just wanted it done. As I went to sit in the stool the travelling photographer then started to complain about how my hair looked. I remember being sort of frozen to the spot and saying I did all I can. No one had any hair gel or anything on them that I could use. I would not have used any of it anyway for fear of catching some sort of transmittable scalp disease or any other kind of shit I might pick up.

For as long as I can possibly remember, I had been cursed with a cowlick in the front of my hair. Most do not notice it now because I tend to keep my hair very short and style it reasonably well. A cowlick is a part of hair that stands straight up and out, or goes completely against the way of how someone might want to style their hair. Try explaining this to many people the same age in school. They would not hear any of it. Instead, my cowlick became the inspiration for a ruthless onslaught of taunting and teasing that left me in tears sometimes before morning classes even began. I was ridiculed for how I looked. A few other smart asses would take it a step further. Part of their ridicule included saying I spent time in the barnyards and fields with cattle and would let them lick my hair. Might seem funny to a few, but it was just downright offensive. Other kids knew of my sensitivity to animals and my respect for them. It was another reason for them to target me. I was a highly sensitive kid.

Soon after that horrendous picture day I never left the house without plastering my hair full of gel, spray, mousse or whatever was around that I could use to keep the cowlick from appearing prominent. This relentless taunting continued right up through junior high school. At some point I was able to start ignoring it. It was very hard to deal with during those years of growing up. Every time I would complain about it, I would be told to grow up and deal with it. “They are just teasing you”. Cold comfort from people who should have done more to protect me.

I was always grateful to my friends from school years, and those in my own family who understood and stuck up for me. They understood that it was not cool to taunt and torment others. Those experiences left me feeling that kids were just jerks in general. Of course they are not all jerks.

Being bullied contributed to being one of the many reasons I never wanted to have children. Cyber-Bullying has taken harassment to levels that people never thought would be possible. It is difficult to read of lives being changed forever because of the tactics deployed through criminal use of social media and other online resources.

Very happy to not be a parent.