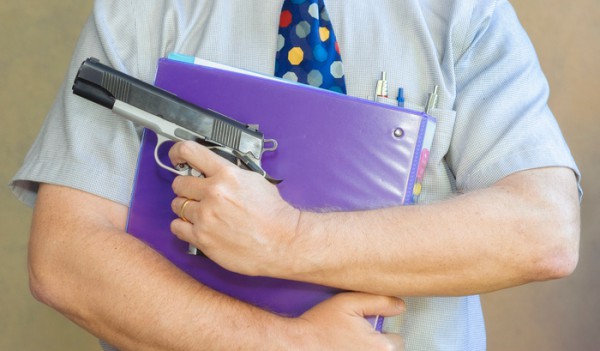 Twenty years after the carnage at Columbine seared the image of mass school shootings into the national consciousness, and after several similar high profile shootings have occurred in other schools, one would hope that the nation had fashioned a comprehensive response to such tragedies.

But alas, here we are, two decades removed from the horror in Littleton, and the most that some folks can think to do is to arm teachers, as has just been approved in Florida, the site of the slaughter in Parkland last year. It’s something several other states have also allowed and which conservative politicians continue to push as the answer to the problem of mass murder.

Not to address the underlying mental and emotional health needs of young people, and not to limit the availability of high-powered weaponry. No, neither of those: rather, hopes, prayers, and more firepower in the hands of biology instructors and wrestling coaches.

Or perhaps English teachers, who apparently can be expected to interrupt their lesson about the proper way to diagram a sentence, or their exegetical treatment of Chaucer, so as to pop a few caps off in the next mass killer and save the day.

Because apparently, some folks think real life is like Fortnite

Guns in School Will Not Stop Mass Shootings

The idea that guns in the hands of more people, at schools and elsewhere, would reduce the likelihood of mass shootings — since would-be shooters would fear being stopped by a skilled marksman and wouldn’t risk launching a killing spree (or if they did they would be stopped before their carnage was complete) — is illogical on multiple levels. Indeed, as regards school settings there is little if any research to predict the outcome of such policies, although what research exists would tend to suggest arming teachers would not work and could make schools even less safe.

First, the kind of person who is willing to commit mass murder is not likely to be open to the rational-minded deterrence that fear of an armed bystander might otherwise provide.

Many mass shooters are willing and prepared to end their own lives at the conclusion of their massacres. If anything, thinking that someone else might intervene and assist them in their desired suicide would only embolden them, as the longstanding tradition of “suicide by cop” — where someone provokes police to shoot them rather than doing the deed themselves — attests.

So too, knowing there was another person with a gun who might try and stop you would, for some shooters, imbue the event with an even greater video-game like quality, making it more exciting, and especially if the shooter is prepared to die anyway.

But even the more limited argument, that someone else carrying a weapon could at least minimize the number of dead in these instances lacks any claim to rationality. Those who believe an armed teacher could likely stop a mass shooter presuppose conditions at the scene that bear no resemblance to the chaos that reigns in cases such as this.

It is one thing when one is serving in a war zone, or when one is a law enforcement officer, to come upon someone engaging in violent action, where confronting the shooter would be the logical and trained response. Soldiers and cops are at least prepared for such moments, and even then they usually miss their targets when they fire, according to studies on the subject. But a third grade teacher or school principal or calculus professor — even if that person is an expert shot — cannot be expected to react quickly and calmly enough to disarm a mass murderer.

When such a person bursts into a classroom, the event is so utterly out of context, that the time it takes for those inside to even figure out what’s happening, would prove more than sufficient for these shooters to do their damage. So too in the Aurora, Colorado cineplex. Disoriented in that case by tear gas, an armed patron would have been firing blindly into the fog, even presuming they would have had the presence of mind to pull their weapon and fire it at all. In cases like that, average people (again, as opposed to well-trained cops and soldiers) are thinking of saving their own lives, not engaging a killer in a hail of bullets.

For gun enthusiasts (or Donald Trump in the case of Parkland) to claim they could have taken down these killers if they’d been there is to play Monday morning quarterback. It is to operate with the benefit of hindsight, aware of what the shooter did and where they did it, such that they can somehow envision themselves crouching behind a door and squeezing off enough rounds to spare lives and emerge the day’s savior.

But in the moment, with real bullets flying all around you, and without the post-facto bravado offered by a Twitter feed, such calm and dispassionate reflection about what you would have done becomes irrelevant.

More Guns in School Can Increase Risks and Decrease Safety

Not to mention, those who advocate for more guns in schools look only at the incredibly rare and unlikely possibility of stopping a mass murder with more guns floating around and pay no attention to the attendant risks on the other end of the equation. They ignore, for instance, the real possibility that long before those guns could be used for such beneficent means as they intend, more of them would find their way into the hands of persons with nefarious intent, or be used in far less constructive ways.

Just consider how many cases of mishandled weapons in schools we have already had — cases where those carrying them did so legally — and how the proliferation of states and districts allowing such things would only magnify instances like this. From teachers and resource officers leaving their guns in bathrooms to desks to their cars, there is no shortage of scenarios by which an increase in weaponry at schools could make students far less safe, resulting in accidental tragedies long before they could ever be used to deter a mass shooting.

Additionally, given the disproportionate way in which students of color are subject to school discipline — despite rule infractions that are roughly equivalent to the rates for whites — there is a logical fear that teachers might use guns not against mass school shooters — over 70 percent of whom have been white — but against black kids perceived as threats even when they’ve done little to merit the designation.

Many cases of abusive over-disciplining of students of color by resource officers have come to light in recent years, and as bad as those have been, imagine how much worse they might be if armed teachers — even less trained than the officers on things like de-escalation — were to wade into such confrontations, all while carrying Glocks on their hip.

Which ultimately highlights the more significant point. The job of teachers is to teach, perhaps to counsel, to help guide young minds and bodies through the difficult growing pains of childhood and adolescence and help deposit students on the other side prepared to face the world and to find their place within it.

Teachers aren’t always good at this of course — as with any profession there are better and worse examples of the form — but it is at least what they are there to do. It is that for which they are trained. It is why they became educators.

What they are not good at is meting out discipline fairly, even in unarmed settings, let alone settings replete with holstered weapons.

What they are not good at — and what they are surely not trained for — is killing the kid they had in homeroom last year, in a crowded and chaotic hallway or classroom.

A kid who, having had the benefit of knowing his plans before his victims did, is now spraying a room with dozens of bullets from a high-powered instrument of death while the teacher, caught off-guard, struggles to take the safety off of their handgun.

Teachers are heroes on their best days, but not that kind.

Let them do what they came to do.

And let us do what we must do to keep our children and all children safe.

Mental health professionals in all schools and the funding to support them.

And yes, a ban on the manufacture and possession of the kinds of weapons generally used for these killing sprees.

There is no constitutional right to any and all weapons, just because you want them. That’s why you can’t have surface-to-air-missiles, personal tactical nukes, or tanks. All but the most unhinged gun fanatic accepts that there are certain limits on weapons possession not only allowed by common sense but by the Constitution as well.

In the end, we are only quibbling over the details; over where to draw that line.

We can start by drawing it here.