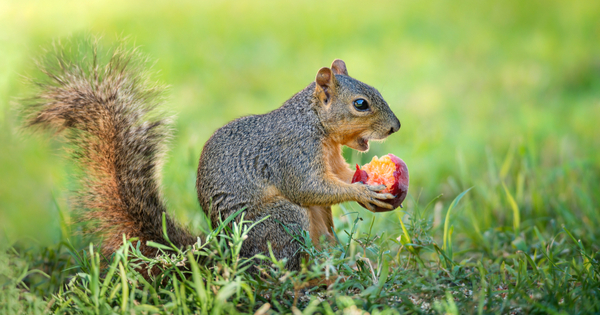 “Come play with me;
Why should you run
Through the shaking tree
As though I’d a gun
To strike you dead?
When all I would do
Is to scratch your head
And let you go.”

Over the past few weeks, for comfort and for strength, I’ve been reading quotes from Lao Tzu, the Buddha, and Jesus Christ.  I see connection in their messages, beauty, grace and compassion in the words, wisdom wrapped in simile, metaphor and analogy, and a shared emphasis on acceptance, charity and love as a way to find enlightenment, peace, and happiness.

At the same time, I’ve been agonizing over the fate of my backyard peach trees, three dwarf varieties planted next to each other in a curved row akin to a “citrus smile.”  In a nutshell (the pun will soon make sense), their bounty of newly sprouted peaches–beautiful baby orbs twice as big as play marbles and covered in an adorable pink fuzz that begged for an electric razor–were being poached by squirrels, plucked from their stems in rodent raids both daring and dexterous.  Whether it be a wild dash across my lawn and a leap into one of my trees, or a measured dive from a taller perch, the squirrels were relentless and creative in pursuit of a grab and go meal.  It was impressive, really, and it was maddening, as I watched this feast of the squirrels unfold.

What could I do to stop them?

Life is a series of natural and spontaneous changes. Don’t resist them; that only creates sorrow. Let reality be reality.

Well, plenty, to answer my question.  While not wanting to judge the advice of others in similar circumstances (Google squirrels and fruit trees), I can only say, that for me, I was unwilling and probably incapable, of taking any action against the squirrels that might harm them physically or even take their lives.  And given their boldness and seeming hunger, I did not see much chance of success in applying a less extreme approach toward determent, such as placing moth balls around the trees, spraying them with predator urine, or dusting the leaves with cayenne powder or some other noxious-smelling substance to squirrels.

So I settled on the idea of building a temporary fence around the trees.  But by the time I got around to going to the hardware store and purchasing a bolt of wire mesh for the job, the old saying of “shutting the stable door after the horse has bolted” applied.  Meaning, most of my peaches had already been snatched.  Only one tree held enough to try and save, and so I went to work to put up stakes and affix the barrier, leaving only a small hole at the top for a few branches to extend.

That was a mistake.  After admiring my handiwork, I went inside and took a snack break.  But when I returned, still chewing on a cookie, I saw a squirrel had gotten inside the fencing and was trapped.  Most likely the animal had managed to drop through the top hole, and now was frantic to get out.  I didn’t like the sight, and I rushed to free it.  I also made the decision, right then and there, to remove the fence for good and let go.

Basically, as Lao Tzu taught, I stopped resisting and accepted reality.  The truth was I was not willing to “go the mat” to quote a famous line from The Godfather in order to keep the squirrels away from my trees.  And if that was indeed the case, I was willing to let them have the peaches.  And so I let them.  I gave up.

No, it wasn’t.  A funny thing happened after I gave up.  I felt better.  I relaxed for the first time in a long time when I looked at the peaches.  In fact, rather than focusing on what was lost, I saw what I had – thriving, healthy trees.  As opposed to the summer before when one was stricken with gummosis (I wrote about it in an earlier GMP column – “To Peach His Own”), my trees were all robust.  The leaves were lush and colored a lustrous green, and the trunks and branches were without flaw.  I felt proud of them, grateful for their beauty and strength.  And from this pride grew a feeling of benevolence, that I had made possible, for the squirrels, such wonderful peaches.  By caring for the trees, I had helped feed them.  Like the Buddha said, I felt peaceful, and I felt uplifted.

Love thy neighbor as thyself.

Just the other evening, I went out to admire the peach trees.  I saw, with some amusement, that there was only one peach left on one of my trees.  I imagine, before the squirrels came to dine, each tree held dozens and dozens of peaches.  But now there was only one left.

The sole peach was pretty and pink like the others, but larger.  It was growing.  It was ripening.   Despite all the changes in my psyche and soul since I had accepted and let go, I felt a pang of protection for this solitary piece of fruit.  I wondered what I might be able to do to keep it alive, to see it all the way to harvest and pick it myself and put on the plate.

Nervousness began to prick at me as I fell back into worry.  But it was broken when I saw, coming into my yard, a squirrel.  It walked halfway across and stopped and looked at me.  It appeared tranquil and content sitting in the grass, watching me.  Truly, the squirrel looked to be at home.  And I realized that he was.

I gave a last look at my last peach and went inside.

I won’t tell you if it was still on the tree the next day.  Because it does not matter.   Am I right? 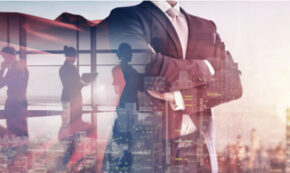 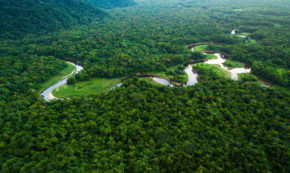