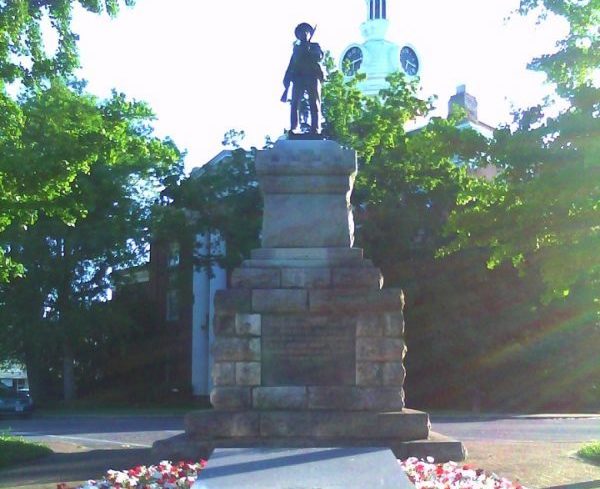 Dear defenders of the Lost Cause, wavers of Confederate flags, and keepers of marble monuments to soldiers long dead,

First off, yes, I am a Southerner. I shouldn’t even have to tell you this, but I’ve been around long enough to know that if I don’t, given what I’m about to say, some-a-y’all are gonna think I’m a Yankee. And not like the New York baseball kind, but like the kind that brought free education and electricity to wherever the hell it is you’re from.

I have never lived outside the South for more than five weeks, and parts of my family have been here since the early 1600s. In fact, my 13th great-grandfather was Christopher Newport, the piratical boat captain who first sailed into Jamestown, and without whose navigational skills neither you nor I would be here.

That’s not a boast by the way. Newport’s exploits were a decidedly mixed bag, opening the door to everything that came after, good and bad. Without them, we would not be here, but millions more indigenous people might be.

Had he died when his shipwrecked on Bermuda during a third supply run from England or been unable to build a new boat and sail on to Jamestown 10 months later, the colony may well have died out. Had this happened, it could have ended colonization altogether (or at least long enough for the Powhatan and others to coalesce into a defensive force capable of repelling further European incursion). And since John Rolfe was also on that boat — the guy who first cultivated tobacco in North America, prompting demand for the enslavement of Africans — let’s just say things would have been quite different had all those aboard the Sea Venture perished.

Others of my family came in the mid-1700s to Pennsylvania, shortly thereafter making their way to North Carolina — among them, my fifth great-grandfather who fought in the Revolution and was one of the so-called founders of Nashville. So if you like country music, two-for-one deals on boots down on lower Broadway, or those God-awful peddle taverns, well, you’re welcome.

When I mention my family legacy, I do so not out of pride. It is merely to let you know that, as we say in the South, my people done been here, son. So the last thing I need is to be reminded about Southern history and the importance of remembering it.

I have long been baffled by your desire to defend Confederate statues and flags, all while insisting that these are representative of Southern heritage. I understand Southern history and culture very well, and I revere much of it, from our literature to our food to our music. What I don’t understand is why you think a four-year stretch, during which a group of traitors broke from their country because they might not be allowed to own Black people anymore, is a good representation of the heritage we ought to preserve.

And yes, that is why they broke away. Don’t take my word for it; take theirs. Alexander Stephens, the vice president of the Confederacy, said it plain as day, noting the new government’s “foundation and cornerstone rests upon the great truth that the Negro is not equal to the white man.” Slavery, he explained, and “subordination to the superior race is his natural and moral condition.” Furthermore, he insisted, in case there was any confusion, the system of chattel bondage was “the immediate cause of the rupture and our present revolution.”

And I know (because you won’t stop telling me) that your ancestor who fought at Chickamauga didn’t even own any slaves. He was just a poor dirt farmer fighting for home and hearth. But soldiers don’t get to choose the reasons for which they go to war — they go for whatever purpose their leaders decide to send them. Your beloved patriarch might have believed himself to be fighting for cornbread and good manners, but that doesn’t make it so. The fact that he might not have realized why the wealthy planter class was willing to gamble with his life — the reasons he had to fight while they remained ensconced in luxury — only makes him more pathetic. But the fact that your ancestor was a sucker hardly alters what those reasons were.

When you insist these symbols are about Southern heritage, you beg the question, whose Southern heritage? Do those symbols represent Black Southerners, who have been here longer than we have? Oh wait, you didn’t know that? Of course not, but it’s true. There were Africans brought to the coast of the Carolinas in the 1500s by the Spanish, some of whom remained after disease and rebellion drove the Spaniards from the settlement. The South is theirs as much as ours, but your history makes no room for that reality.

The South belongs as much to enslaved persons who rebelled against their bondage as it does to those who kept them chained. It belongs as much to Nat Turner as to those he killed in righteous revenge. But you erect no statue to him. Your monuments suggest that Southern heritage is about white men who sought to dominate Black folks, not the Black folks who said, “Enough of that bullshit,” and fought back.

Hell, Southern heritage is Dr. King and Fannie Lou Hamer and Amzie Moore, and Unita Blackwell and John Lewis and Ella Baker — surely as much as Bull Connor and George Wallace and Stonewall Jackson. The struggle against slavery and for basic civil rights for Black folks lasted in the South far longer than the Confederacy. Yet, I see nothing in your remembrances and honorifics to suggest that you commemorate that part of Southern history at all.

Your heritage is not Southern; it is Confederate, and that is a very different thing.

I doubt you even know the white Southerners who joined in those battles, and who are every bit as much a part of Southern heritage as Robert E. Lee and Jeff Davis. But if you don’t know the names and stories of Bob Zellner and Anne Braden and Moncure Conway, and Duncan Smith, and William Shreve Bailey, and John Fee, and Virginia Foster Durr, you know nothing of Southern history. You care nothing for it, except in its most martial of iterations. Your heritage is not Southern; it is Confederate, and that is a very different thing.

Do you celebrate the Southerners in East Tennessee who so opposed the Confederacy that the Governor of the state had to force them to go along with secession? Why no statues to them and their courage?

Do you celebrate the Southerners in the Western part of Virginia who broke away and formed their own state because they so opposed the cause for which Lee and others fought? No. And sadly, too many white folks in that state — a state formed in opposition to the Confederacy — now wave that flag unthinkingly, having been co-opted into the cult along with so many of their more Easterly brethren.

And please, none of this nonsense about how we should leave the statues up because they’re a part of history, from which we can learn. These totems are not history texts. They are one-dimensional graven images, built by white folks a half-century after the war, to rehabilitate the Southern cause by lying about what it had been. Those who created these monstrosities saw them not as classrooms but as worship altars where they could metaphorically drink of the blood and eat of the flesh of their great-great-grandpappy Beauregard, eliding what a wretch he had been and the ignoble cause for which he had fought.

First, I’m gonna need you to stop telling Black people to get over slavery. Aside from how the legacy of slavery continues to impact Black people — from wealth disparities to health outcomes — those who can’t let go of a government that was defeated 155 years ago are in no position to tell others to get past the past.

Especially when I can see some-a-y’all driving around with this on your bumper:

Also, you’re gonna need to stop with all that stuff about how the Republicans “are the party of Lincoln,” while the Democrats were the party of slaveholders and the Confederacy. First off, everyone except Candace Owens and some Russian bots on Twitter knew that already. Second, it’s conservative Republicans — and damned sure not liberal Democrats — defending that flag and those statues today. You and your compatriots are the ones intent on honoring the Confederacy. You’re the ones unfurling that flag at Trump rallies. You own that now. We all know who the Republicans and Democrats were. The Dodgers used to be in Brooklyn, too. Shit changes. Keep up, Cooter.

In closing, I’d like to believe we both love the South because it’s a fantastic place, from which soil some of the finest freedom fighters in this or any nation’s history have been birthed. But we do not both love it, and the persons you revere are not those freedom fighters.

Your South is cramped and narrow and reactionary and backward-looking and sad — it is a South of losers, then, now and always. Mine is open and inviting and forward-looking and confident. Open to equity and justice for those who were here all along, inviting to newcomers who seek to make it home, and confident that just as those who believed in freedom kicked your version’s ass a century and a half ago, so too will the forces of liberation steamroll you this time.

So let’s get out the cranes and jackhammers, and get to work.