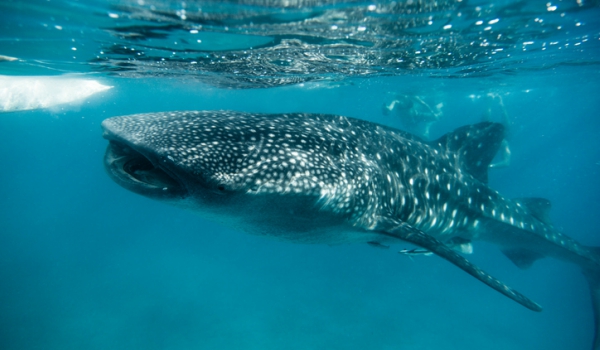 As I jumped off of the boat, the divemaster warned me, “Watch out for the giant grouper. Some days it’s friendly and some days it’s not.”

On the seafloor, the grouper brushed against me several times, then faced me and hovered. But even the thrill of our contact couldn’t soothe my skeletal sorrow. The year was 2016, during the worst coral bleaching in the history of the Great Barrier Reef. Twenty percent of the reef was dead and much of the rest fatally wounded. For the last week, I had joined batches of divers traveling out of Port Douglas to dive different areas of the reef. I learned that pastel colors indicate that the coral is sick, bleached white means it’s dying but might recover if the waters don’t have another warming incident in the next 10 years, and rusty brown means the coral is dead.

All around the grouper and me were miles of bone-white and rusty coral. The fish were spare; lone turtle and shark sightings rare. The world’s largest reef spans 1,400 miles along Australia’s coast and an area of more than 134,000 square miles. No part of it was unaffected by the unseasonable hot waters killing its algae and starving the coral.

I reached out and stroked the grouper, wondering what this colossal fish thought of the dying. Was it lonely? Hungry? Traumatized? My own emotions baffled me — their intensity seemed displaced as if I too had suffered a fatal blow. I could not fathom them any more than I could those of this fish.

Something in me faltered.

A few weeks later, I wrote a piece called “Searching for David Attenborough’s Reef,” an anguished lament that the wondrous Great Barrier Reef in my mind — put there by years of National Geographic shows — no longer existed. When my friend read it, she asked me if there was something else going on in my life that would account for this outsized sadness. This friend is one of the most brilliant and emotionally generous people I know and at the time her question was logical because neither of us was practiced in processing the sudden death of an ecosystem. I tried to identify more personal distress that could account for the failure to immunize myself from this tragedy and came up empty.

I never published the piece. All I had to offer then was crushing despair and any hope I tried to conjure rang false. With each subsequent blow to the reef and to all the other dying coral reefs, my emotions leached into my own white bones. It would take a year before I discovered a word that came close to expressing them.

Coined in 2003 by the environmental philosopher, Glenn Albrecht, solastalgia means:

The pain or distress caused by the loss or lack of solace and the sense of desolation connected to the present state of one’s home and territory. It is the lived experience of negative environmental change. It is the homesickness you have when you are still at home.

Solastalgia does not precisely describe my trauma at the Great Barrier Reef, because Australia is not my home. But solastalgia opened me up to the reality that I was not the only person feeling deep distress about climate change and grasping for language to express it. I came up with a word that more accurately described my feelings around my experience: Ecogrief. It turns out that this is a shortened version of an already existing term– “ecological grief,” which has a cousin term, “climate grief.”

The more I looked, the more words I found. Last year, Glenn Albrecht published a book called Earth Emotions: New Words for a New World which examines the words that express an array of Earth emotions. Albrecht hopes that we pass out of the current human-dominated Anthropocene era into what he calls the Symbiocene, an era in which we live in healthy symbiotic relationships with all of the earth’s inhabitants. To this end, his book champions the growing body of language we’re creating to express our emotional relationships with the earth. He contends that the ravages of the Anthropocene are putting us in a psychic, emotional, existential crisis. He hopes that literacy in earth emotions will precipitate a “conceptual and emotional revolution” that may help avert the “biophysical meltdown of the planet.”

An equal portion of the earth’s emotions chronicled in Albrecht’s book is positive, and he takes care to juxtapose the negative earth emotions against the positive ones, which are in lockstep. You can’t have one without the other. Among these positive emotions are topofilia (love of land), biofilia (love of life), and eutierria (a feeling of oneness and peace with one’s environs).

Since my meeting with that giant grouper in 2016, the current ecosystem of the Great Barrier Reef has collapsed due to human-caused global warming. The negative earth emotions help ground my grief and anxiety and reinforce that I share these feelings with others. The positive emotions remind me of the many experiences in living in my biophysical environs that I do not want to lose — including clean air, blue skies, freshwater, nutritious food, and the company of plants and other animals.

I did not expect to live in an era so dominated by a great mystery. But I do. The mystery that haunts me is this: why is it that we know what is happening around us but do not act to stop it? Why are we destroying ourselves and taking down trillions of plants and animals with us? Why? It is a mystery that fills me with terror, guilt, anguish, excitement, purpose, energy, humility, and awe.

A new wild rises around us. Within it we fumble for language to salve our disbelief, our anguish, and to acknowledge a love for and union with the lands that sustain us. These new words can help us live creatively in this great mystery of our time.

Colby is a digital marketing leader, writer, and entrepreneur with a passion for using social media as a storytelling medium that engages communities. She has spent six years running her social and digital marketing consultancies and worked with dozens of clients.

Colby has lectured on social media marketing at Harvard University, USC Annenberg, and the New York Film Academy. She has a BA from Barnard (Columbia University) and an MA from Harvard.