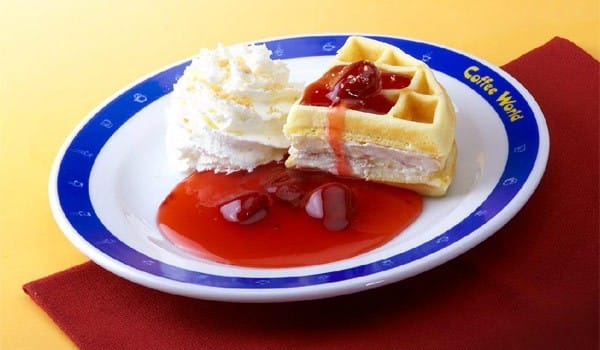 I never thought I’d be one of those people who craved a Starbucks, but the last few years in Suzhou spoiled me. Within a two kilometre radius of our place there we had four Starbucks. Four. That’s roughly on par with the number of mainland Chinese food restaurants in the same area.

The downtown Guomao Coffee World and Pizza Corner was the first Western restaurant we were introduced to after moving down to Haikou. I’d never heard of the chains before, but was looking forward to sampling something not steamed, stir-fried or boiled, and I wasn’t let down. Their pizza, while not earth-shattering and a far cry from the ‘za of home, was more than enough to subdue my comfort food craving.

Unfortunately, its distance from where we live made it a bit of a non-starter for regular visits. I think other parents with young kids will sympathize; when it comes to eating out with a toddler, close to home tends to win out almost every time.

We’re fortunate that where we live in Haikou has a variety of decent Chinese restaurants, and one crappy “pizza” place. As such, I’ve not really been left wanting, with the exception of not having a good spot to get a Starbucks-style coffee nearby.

But now we do. Not 10 minutes from our place is a newly opened Coffee World location, on Haidian Dao’s Wuxi Lu. This morning Maggie, the boy and I decided to take the spot up on its offer of 2-for-1 waffles and see if it was any good. It was.

Prices are about on par with what you’d expect at a Starbucks — iced coffee drinks run 25 RMB (med) to 35 RMB (lrg), and the waffles range from 22 RMB (plain) to 30-ish RMB for fancier stuff. Our berry-covered waffles were 27 RMB (and two for one!). The location is small, much smaller than the downtown spot; and lacks a Pizza Corner, so food is limited to waffles, NY-style bagels, some wraps, pasta, and other simple stuff. But still, it’s a nice addition to the collection of restaurants in our “18-month-old-meltdown-must-run-home” radius.

I should mention that Coffee World isn’t the only Western-style coffee shop (not to be confused with the plethora of UBC clones on every corner). There is a cute café called Milli Coffee just around the corner from the downtown Coffee World, and a newly opened one a few doors down from the Coffee World by us on Haidian Dao. It’s the spot I want to love, but can’t.

Milli’s old-sofas and ambient interior have a bit more charm than Coffee World’s polished cookie-cutter chainishness. However, both times I’ve been there its staff seemed more interested in practicing invisibility than serving customers. What’s more, the drinks are over-priced, especially considering their decor couldn’t have cost more than a day’s worth of iced cappuccino sales. I have a hard time paying a premium to sit on dirty second-hand furniture in a dimly lit place — but that might just be me.

And it has no 2-for-1 waffles (at least until the end of the year). But maybe the near proximity of both locations will be for the betterment of both places, and ultimately us iced-drink lovers.

So Starbucks, this is just to say, we still want you to come to the island, but in making us wait you’re going to have some decent competition when you get here.