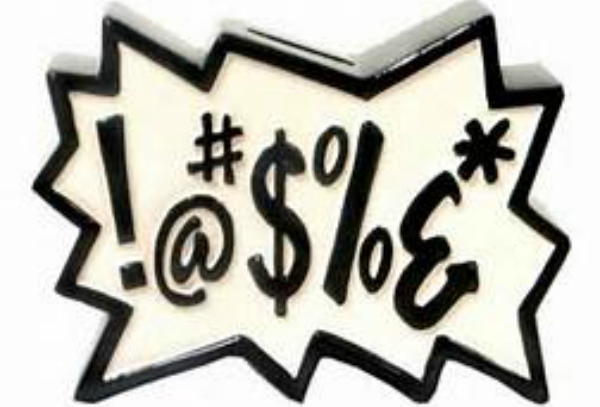 What makes a swear a swear? One word is forbidden to say while another is not? These are the questions my five-year-old asked me this morning, a conversation that came about not long after she demanded to be able to “take a frigging shit in peace.” I allowed her the courtesy of finishing her defecation without further interruption, then planted her hindquarters on a chair in the dining room until I could regain enough composure to address this situation.

What makes a swear a swear?

The original “bad words” came from a time when cultures had not yet developed written language. The belief that spoken words could curse or bless people and affect the surrounding environment. “Word Magic” used for nefarious purposes.

We’ve obviously come a long way since those days. Any word is just sound until the meaning becomes attached to it. And yet, there have always been those that have been considered taboo to say.

Some swear words are deistic, related to religion. The very word “profanity” meaning to take something sacred and treating it with abuse or irrelevance. Another synonym is “oath”, it’s root coming from taking the Lord’s name in vain. During the Middle Ages, the worst things a person could say were “by God’s bones” or “by God’s nails.” The word “bloody” originally referring to the blood of Christ.

Others are visceral, related to the human body. The term “obscenity” used by the ancient Romans to accuse each other of sexual deviance. The age of Victorianism making anything that had to so with sexuality unacceptable to speak of.

As long as there has been spoken word, there has been swearing. Human nature demands that there be some way to be inappropriate or shocking verbally. Extra emphasis added to a sentence to convey or elicit an emotional response. A basic need to be able to insult each other in increasingly crude and vulgar ways. For every landlord and bourgeois holding onto the idea of language as a barometer of morality and deportment, a dozen peasants and proletariat determined to rebel against cultured society.

Cursing has also been found to be cathartic, helping to relieve stress or aid in dealing with emotion or pain. Brain imaging studies have shown that people who are allowed to swear during the experiment are able to handle pain stimuli for longer periods of time than those that are not.

What makes a swear a swear? Societal acceptance, ever-changing attitudes towards what is and what isn’t. When lineage was more important, the bastard was one of the worst things that a man could be called. An entry from 1811 in The Dictionary of the Vulgar Tongue defines the word bitch as “the most offensive appellation that can be given to an English woman.” Whenever a word becomes commonplace and loses its ability to shock, another will be there to replace it.

All of which is very interesting, but completely useless in dealing with a five-year-old. She was simply told that there are some things that adults are able to do and say that children aren’t, and she needed to get used to that. I also told her that she needed to get her ass ready for school.

Sometimes I’ve found it’s better not to overthink these things.