This is never going to work.

The thought runs through my mind as I consider the imposition that I present when traveling with a Nomad whose travels depend on his affability, knack for reading people, as well as his capacity to find a way to be useful in any situation.

This is all more of an accusation than a compliment. I’m a bit daft in those departments. While I can certainly be useful – I’ve misplaced my aptitude for reading people, and a portion of my general cordiality, in the year I’ve lived on the far end of this vast continent (my cynicism has blossomed under some harsh conditions, whereas I would have previously termed myself a realist…).

And now he has to justify my presence, as well as secure my lodging. This is never going to work.

But, as he so often says, “Expect nothing, always get something.”

I started off my expedition with the luck of [free] Ministry transport to the Zambian border. It’s great working for the government in Namibia. You can guilt most people with a green license plate into giving you a ride. Provided of course that they’re at a police checkpoint or a petrol station – otherwise they fly by with nary a glance.

Trying to dispel any bad luck, and continue my streak (I’m a little superstitious), I opted to show up with no warning at the lodge he’d been bartering with. Better to not impose completely from the get go and require a ride from town into the bush. Plus – greeting someone after a month’s time with a hike pack on your back then having to hoist it up into the car then out again then store it somewhere… It all seemed too unwieldy.

But there I was. In a well situated lodge with a charming vibe on the Zambezi River. The Caprivi Houseboat Safari Lodge… With the Nomad.

The morning was a bustle… We were almost packed to go, and I discovered my chronic tendency of leaving something essential behind had struck again. My power adapter. Great. As I’m contemplating the expense of a new one – the Nomad has already secured another from one of the lodge staff.

The man’s ability to secure vitally important things with a well-timed appeal is uncanny. It’s not manipulation. People just generally like him. And want to help. It’s a little annoying… but then, I like him too… It’s just he makes it look so easy (I might just be jealous).

Before our departure, and in the midst of my early morning wine intake (it was a holiday for me, after all), I’m struggling to replace the elastic cord through the poles of a tent that has been provided by the lodge owner for the Nomad’s travels. He is whipping around tying up loose ends, exchanging data files, finding me duct tape and wire for the tent repair endeavor, helping load the boat for the day’s outing, fixing the shower curtain he’d installed (that I’d nearly ripped out of the wall by slipping on the curtain… It also turned out, later, that I had left behind my shampoo and conditioner in the damn shower).

And suddenly, we’re off.

The Nomad had secured us a free hike with a family of three – all the way to our destination. As I’ve made the trip overland once before (and had sworn to never again… but, you know… he’s worth it)… I can say with all certainty that a private vehicle – a 4×4, no less – is certainly better transit than a mainliner bus. Plus, homemade kudu biltong. The company was lovely and the trip was smooth. Well, as much as it could be on the road from Sesheke to Livingstone.

The first stop? Maramba River Lodge. The manager took one listen to his Oz accent and bartering pitch and upgraded us from the campground to furnished dome tents. Our human neighbors were non-existent in that neck of the woods. It was perfect. Perfect until that night, when I discovered that the Nomad had the unfortunate habit of grinding and chomping at his teeth in his sleep. I turned over on my bed and threw the blankets over my head to drown out the noise.

What WAS that? Is he growling now? 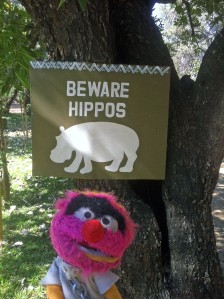 The next morning I was considering telling him how close he came to being brained for disturbing my sleep (I snore, so I’m not one to talk)… And he mentions he’d had to let loose a ‘groar’ (a growling roar) at a hippo that had been chomping outside our tent… I couldn’t help but laugh. Of course the Nomad would think to groar and startle away a grazing hippo… Good thing I didn’t whack him on the head, too, of course (though I did poke him in the eye the night previous – but that was accidental violence, and doesn’t really count).

The wildlife at Maramba River was abundant. We also spotted crocodiles, baboons, herons, egrets, a river monitor… Elephants. At least twenty elephants. I’ve lived in Africa for a year… And this was my first encounter with elephants. One could understand how I might get a little excited… So, naturally, while peering about toward the distant foliage for another camera angle, I walked mid-stride into a roof support. Despite a quick application of ice, I’m still sporting a black eye over a week later. While I left nothing physical behind at that first lodge, I did lose track of my pride for a moment.

The second lodge. Zig Zag. Absolutely charming, with a pretty amazing proprietor… I have a feeling if you let her, she’d impart a ton of great stories. Unfortunately, our food arrived too quickly and she was too polite to continue. I still don’t know how she got out of being kidnapped by police in Tibet. It’s killing me.

She, too, was quick to accommodate the Nomad.

Our only wildlife encounters were the baboons that hopped the high walls (meant to keep out the elephants) and were rustling about on the roof.

But, as nomads are want to do, we moved on to another lodge. During this departure, I left behind my favorite earrings, and my sunglasses (so much for disguising my black eye).

Next was the Rite Inn. Luxury suites, where after only a moment’s hesitation, accommodation was provided. We spent the better part of the day in front a flat screen TV being lazy after days of walking about. Though we did eventually head to dinner – and stop to retrieve my lock and key earrings I’d left on the mosquito netting at Zig Zag.

We arrived for the sunset at the waterfront only to be herded out by lodge staff who were in the progress of their weekly mosquito spraying. Ah, the smell of DDT in the evening… It really sets the mood, no?

Vervet monkeys offered distraction as they hopped from one safari truck to the next in the parking lot, until the fog dissipated and we braved the freshly fumigated air to view the sunset over the river.

The last day, we headed for The Grotto. An overland campsite we’d heard about from the family who’d given us our ride into the country. Before we set up camp, we decided to seek out the owner, a New Zealander, for a chat before we headed to Mosi Oa Tunya Falls.

Earlier in the week, when we’d first approached this character – and he is a character – he’d been entertaining a friend, a local lodge manager. As we’d secured our lodging for a day or two hence, I wasn’t particularly quick on the uptake when he mentioned the place we really need to see is Jungle Junction…

“Jungle Junction… Bovu Island! That’s where you should go.”

“Sparky,” he calls out to his departing friend, “These two want to see Bovu.”

The Nomad handed over his card and gave his spiel, while Sparky stared at the card bewildered.

“No telephone, only email?”

I’ll admit it, at that, I thought we were dead in the water. In my head, it just wasn’t a possibility.

But wouldn’t you know, a day or two later, the last night, instead of the Grotto – which I had been fine with (especially since I had to catch a bus early the next day) we found ourselves on the beautiful Bovu Island. Absolute paradise.

In fact, I think The Nomad had been holding out for it, when he said just to drop our stuff in the grass. Holding out, just in case.

All in all, we visited five lodges seeking accommodation and meals. Only one shot him down. And one helped us get to Bovu Island – my now favorite place in Africa.

I’ve done my fair share of travelling around the world, and a fair bit of it in Africa.

But this whole philosophy… Expect nothing, always get something… Relying on the kindness of strangers and working towards a mutual benefit without the exchange of money?

I was skeptical it would work. Let alone run smoothly. I’ve been converted…

This Nomad is on to something.

For more of Hope’s entertaining thoughts, check out her blog at http://hopebowie.blogspot.com

Originally posted on The Nomadic Diaries.
—