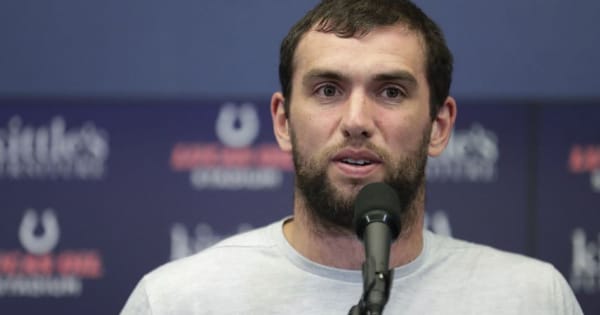 Andrew Luck announced his retirement from the National Football League on August 24, 2019, much to the astonishment of the football universe. I will admit that I was stunned to see Luck walk away at such an early age (29) with so much left to accomplish, not to mention the boatload of money that he was leaving on the table.

He was met with boos and cries of derision when word leaked of his impending retirement. The general attitude of the fans in attendance at Lucas Oil Stadium was, “You get paid millions to play a game. Stop being a baby and get out there and play for my amusement!”

Men are taught at an early age that we have to be successful according to society’s definition of what success looks like. Maybe it’s a great job with lots of money or maybe it’s having millions of followers on Instagram so that you can make hundreds of thousands a month as an “influencer.”

Andrew Luck had all of this. He was the star quarterback for the Indianapolis Colts. He signed a five-year, $122 million contract, which meant that he was set to earn a base salary of $9.125 million in 2019 and a roster bonus of $12 million! This doesn’t take into consideration the amount of money he would have made in endorsements and paid speaking opportunities. He would be a fool to turn all of this down – unless he decided that there was something bigger to live for than millions of dollars and the adoration of fans around the country.

Did he decide that quality of life mattered more than gridiron success? Maybe he decided that he loved his new bride, Nicole, so much that he wanted to dedicate the rest of his life to ensuring that he did not end up as a cautionary tale like the football greats of the past such as Earl Campbell. Perhaps he wanted to prepare himself for the impending birth of their first child.

I get it because I’ve been there. No, I never played professional football, and at my age (45), any dreams of being an All Pro faded twenty years ago. But I do know what it is like to hit the proverbial breaking point where all you want to do is walk away because the pain of continuing down a particular path is too great to endure any longer. I imagine that I’m not alone on this boat. I’ve been there and I’m sure you have been too.

Is there anything that you’ve loved so much that you were willing to give everything up for it only to realize that thing you love so much was killing you? I walked away from a marriage that was killing me, which meant that I went from being the man who “has it all” to being derided as a “deadbeat dad” and every other ugly invective you can throw at someone. To the outside world I was “crazy,” but I knew in my heart that I deserved something better even if I couldn’t tell you what that was in the moment. I just knew I was tired, and I was tired of hurting.

As men we are taught to “endure” and “push through our pain,” which makes sense if you are in the middle of a CrossFit WOD, but not when it comes to matters of the heart. This is why I applaud Andrew Luck, because whether he realizes it or not, he has given men and women around the country a simple, but elegant lesson. When you are honest with yourself about a course of action, you will then have the strength of conviction to hold your head up high no matter what the people around you think or say.

So I applaud you, Mr. Luck. Not for your football accomplishments but for your strength of character. Thank you for the lesson, sir. Now go enjoy your life. You’ve earned it.

Jason Greer is Founder and President of Greer Consulting, Inc. (GCI), a Labor Management and Employee Relations Consulting firm located in St Louis. Jason is the "Go To" Diversity Expert for WTOP Radio in Washington DC and a trusted source in the latest race and labor relations news for media across the country, including The Wall Street Journal, Forbes and FOX News Radio.

Facebook158TweetPin100Email1Shares259
wpDiscuz
Share this ArticleLike this article? Email it to a friend!
Email sent!