Get Daily Email
Join/Login CLOSE
Home / A&E / 75 Years Ago, Hitler Knew the War Was Lost. He Ordered Paris to Be Burned. 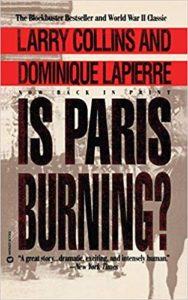 GUEST BUTLER PIMM FOX, the creator and news anchor of “Taking Stock,” a program of business interviews and financial news analysis broadcast daily on Bloomberg TV and radio, is currently the author of daily commentary and insight for Bloomberg Markets Live. His writing has appeared in Barron’s, The Wall Street Journal, and The New York Times.
—–
75 years ago this week…..

Late in 1943, Hitler realized that he was losing the war. On July 20, 1944, he appointed General Dietrich von Choltitz as the military governor of occupied Paris. His mission: protect Paris from the Allies. If this mission failed, he was to destroy Paris completely. “Paris must not fall into the hands of the enemy, “Hitler said. “If it does, he must find there nothing but a field of ruins.”

That summer, the U.S. 4th Infantry and the Free French 2nd Armored Division raced from Normandy to Paris.

Their goal: save Paris from ruin.

In Paris, meanwhile, citizens crushed by four years of German occupation and rule took to the barricades.

Would the improvised French rebellion block the detonation of tons of explosives by the demolition experts of the 813th Pionierkompanie?

It was not. Dietrich von Choltitz declined to carry out Hitler’s mission.

Von Choltitz was a very unlikely hero. From History.net:

Since the July 20, 1944, bomb attempt on his life, the Fuhrer had had little faith in his military commanders’ trustworthiness; yet in Choltitz he believed he had found his man for a monumental task. Choltitz’s family heritage of generations of Prussian militarism left little room for an independent spirit. He had been raised to do as he was told.

But when he arrived at the Fuhrer’s headquarters in 1944, he was in for a shocking disappointment… After a rambling discourse on his career and the war, Hitler concluded with a shrieking diatribe against the Prussian officer corps. Finally, he told Choltitz he would be Befehlshaber, fortress commander, of Paris and should ‘stamp out without pity’ all civilian acts of disobedience or terrorism.

For the first time in his life, Choltitz thought of disobeying a direct order…

On August 17, the busy general received at his headquarters Pierre Charles Tattinger, the mayor of Paris. The mayor was alarmed at all the explosives being deployed throughout the city and asked the German for an explanation. He was shocked by Choltitz’s response: ‘As an officer, Monsieur Tattinger, you will understand there are certain measures I shall have to take in Paris. It is my duty to slow up as much as possible the advance of the Allies.’

Although he was a collaborator, Tattinger was understandably aghast at this revelation. How could even the Nazis consider such an atrocity? Suddenly, Choltitz was seized by one of his periodic attacks of asthma and went into a fit of uncontrollable coughing. Leading him onto the balcony for some fresh air, Tattinger looked down on the lovely sculptured garden of the Tuileries and had an inspiration. Gesturing at the captivating vista, he made his point. Below them a lovely young girl was riding her bicycle on the Rue de Rivoli; on the manicured grounds of Le Notre, children played by the pond with their sailboats; across the adjacent Seine was the glittering dome of Les Invalides; and beyond that stood the landmark of the City of Light, the Eiffel Tower.

The Frenchman’s appeal was powerful: ‘Often it is given a general to destroy, rarely to preserve. Imagine that one day it may be given you to stand on this balcony again, as a tourist, to look once more on these monuments to our joys, to our sufferings, and be able to say, ‘One day I could have destroyed this, and I preserved it as a gift to humanity.’ General, is not that worth all a conqueror’s glory?’ Choltitz looked silently to his left at the Louvre and to his right at the Place de la Concorde and replied: ‘You are a good advocate for Paris, Monsieur Tattinger. You have done your duty well. Likewise I, as a German general, must do mine.’ Would he?

“Is Paris Burning?” is written as a series of scenes based on interviews with, and the written memoirs of, the people involved, on all sides, in the liberation of Paris.

Collins and LaPierre and their researchers spent three years interviewing 800 people in France, Germany and the United States. They consulted senior Allied officials, Allied and German war diaries, memoirs, and official records. The result is a compelling volume of vignettes. Senior Allied officers who assisted the authors included Generals Dwight D Eisenhower and Omar Bradley, and Allen Dulles (of the OSS); French interviewees included Jacques Chaban-Delmas and Henri Rol-Tanguy (of the French Resistance), Mme Leclerc (widow of Jacques Leclerc) and Alain de Boissieu (son-in-law of Charles de Gaulle); and from Germany, Dietrich von Choltitz (Commandant of the Paris garrison) and Walter Warlimont (of the German High Command). [To buy the paperback from Amazon, click here. For the Kindle edition, click here.]

The movie, in contrast, is a mess. The screenplay was written by Gore Vidal and Francis Ford Coppola. The film starred Kirk Douglas, Glenn Ford, Yves Montand and Orson Welles. But each cast member spoke his own language in the movie. Really. The Germans spoke German, the French spoke French, and Orson Welles even spoke English (and a little Swedish). And then there was a typically French solution to the problem this production faced on the streets of the capital in1966. French law did not forbid the display of the German swastika flag — but it did prohibit the display using the original colors of red and black. So the movie was made in black and white. The book is vastly superior.

Scenes from the disjointed movie…


—
This article originally appeared on The Head Butler.