Get Daily Email
Join/Login CLOSE
Home / A&E / When the Going Gets Ugly, You Want to Reach Higher. I Don’t Think You Can Reach Higher Than This 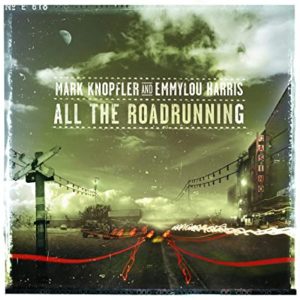 Talent is the ante. Many have it. What you do with it is what matters. Emmylou Harris and Mark Knopfler are blue-collar workers. They take their immense natural talent, put it to the side and roll up their sleeves, building songs like brick walls — a note at a time. As the notes pile up, they sound effortless, eternal, as if they could have been served up in no other way. Which is why Knopfler and Harris’s CDs feel like houses: solid, honest, as permanent as anything mortals can create.

They’re houses in another way too — as places of refuge. Put a Knopfler or Harris CD on, and the world feels right. His sure slow hand, cousin to J.J. Cale, a fluid contrast to his refreshingly non-professional voice. The angelic clarity of her voice, cutting and floating, suspended in time and space, as close to perfection as we’ll know in this life.

Together, there’s nothing they can’t do: iron strength, gossamer delicacy, you name it. Listen to two minutes of the title song and experience gratitude, relief, exhalation, comfort:

This CD is what happens when people working at the top of their game make art just to please themselves. No one was begging for this CD. Few knew that, six or seven years earlier, Harris and Knopfler cut two songs together for a album of his, then decided to expand the collaboration. Money? A non-issue. Knopfler’s recordings with Dire Straits add up to 100 million CDs sold. Emmylou’s catalogue goes back 30 years; she lives modestly in Nashville, she’d rather work than shop. [To buy the CD from Amazon, click here. For the MP3 download, click here.]

I’ve interviewed Knopfler. He’s wicked smart, and funny in a way that deflects attention from the smartness and its twin, sensitivity. I’m sure there’s a performer side of him, and that he has the ego to dazzle whole arenas. But what comes across more readily is the pleasure that runs through him as he takes a guitar in hand. It’s fine that he’s not such a great singer — his guitar sings for him. It’s full-bodied, round, sincere.

I’ve interviewed Emmylou. In 15 minutes, we spoke of things that are true: dogs, touring, the good fortune of waking up alive each day. I see her every chance I can. The experience never changes: This is an artist of unblemished integrity who can be in the moment as well as anyone who ever sang country. But she’s grown beyond country to a genre that could be called American roots but might better be left nameless — it’s just her music. You don’t want to reach the pearly gates without the thrill of a live performance by Emmylou Harris.

No collaboration is equal. Knopfler wrote ten of the twelve songs — Harris is not a prolific writer — and the band is his. That’s plus two, right there. Knopfler is a wonderful songwriter, colloquial, effortless, heartfelt, light. And his band is authoritative, especially his drummer, Chad Cromwell, who lays down the most confident beat in pop music.

There are duets, and they’re satisfying. But even better are the songs that have them own alternate verses.

Then Emmylou comes in, with words that sound as if they were written just for her — because they were:

You hear those two verses, and every muscle relaxes. You are in the hands of masters. Who provide, as masters do, rich variety. There’s even a jukebox hit: “This Is Us.”

The last song, “If This Is Goodbye,” was inspired by the phone calls made by the passengers of Flight 93 on September 11. Listeners take it personally. A comment on YouTube: “My beautiful wife entered the church to this wonderful song. Farewell, my love, see you in eternity.” Knopfler’s guitar has never been more fluid and elegaic. His writing has never been simpler:

“All the Roadrunning” is everything I could possibly want. A “ten best,” desert-island disc. Background music. A collection of tunes for the road. Deep pleasure in the dark at midnight. Perfection, preserved in amber.